Home » TV & Movies » ‘Why’d you volunteer – you get paid at ITV’ Ranvir Singh mocked for asking ‘What’s that?’ ‘Why’d you volunteer – you get paid at ITV’ Ranvir Singh mocked for asking ‘What’s that?’

Ranvir, 43, and Adil, 46, were on hand to host Good Morning Britain as the show’s leading presenters take time off over the Easter break. With discussion rife about the coronavirus vaccine programme, the journalists began talking about whether they had been given the jab in accordance with whether they came under the top priority groups. As he is over the age of 45, Adil told his ITV co-star he had received this first vaccine but when Ranvir said she hadn’t, the actor turned broadcaster mocked her by suggesting she volunteer at her GP practice to get one.

Looking straight at the camera, Adil told viewers: “It’s so funny. These two (Ranvir and Sean Fletcher) are trying to figure out how to get a vaccine.

“You could volunteer. People have volunteered,” he continued to tell Ranvir, who replied: “Volunteered for what?”

Looking at his co-star with confusion, the broadcaster then mocked the former Strictly Come Dancing contestant.

“‘Volunteer? What, you don’t get paid? Why would anyone volunteer?’” Adil jibed as Ranvir tried to defend herself.

“‘What about the money? Can I dance? Will I win a competition? Will I get to present Lorraine?’” he continued. 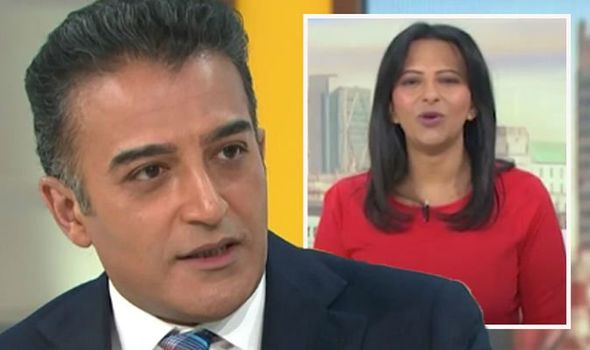 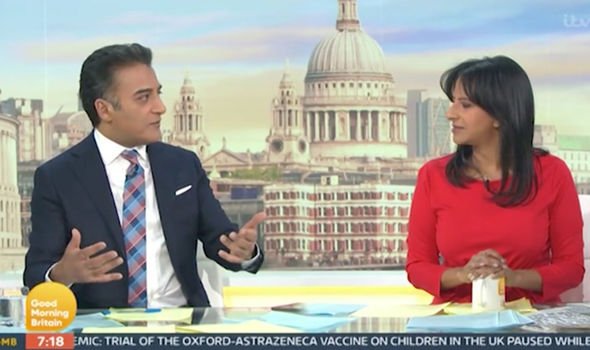 “I didn’t mean it like that,” Ranvir hit back as she looked uncomfortable with Adil mocking her over the vaccine.

Returning to the conversation at hand, he explained: “You volunteer for the programme and some of them have been given the vaccine.”

“Oh, yes. I see what you mean now,” the former Strictly star replied and it wasn’t long before Sean, 46, jumped to her defence.

“I love how smug you look (Adil) because you’ve had your vaccine. Look at him. ‘I’m alright Jack,’” the newsreader added.

“I’m lucky but you will all get one eventually,” Adil told his co-stars. 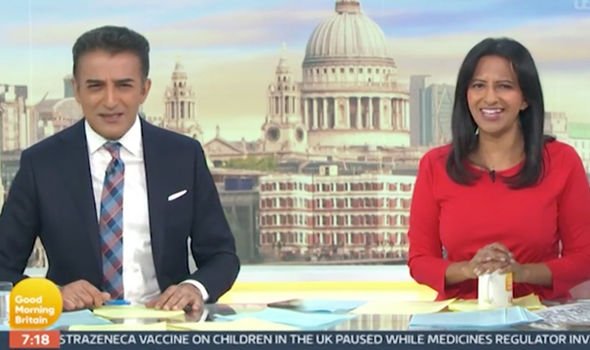 Although over half of adults in the UK have received their first vaccine, there is still debate over the uptake and safety.

As well as concerns over supply issues, recent reports have revealed trials for giving the AstraZeneca jab to children has been paused.

This is because a handful of cases of blood clots have been found in adults who received this vaccine both in the UK and in Europe.

However, there is no indication this is going to affect the current rollout of AstraZeneca for members of the public over the age of 18.

Resident medical professional Dr Amir Khan gave some reassurance to viewers who might be concerned by current reports.

Talking in particular about the blood clots, the GP said: “If you look at the numbers, it is a very rare event.

“In the UK, just over 18 million people have had the Oxford-AstraZeneca vaccine and there have been 30 reported cases of this clot.

“But Europe has taken a slightly different approach. Germany has halted their use of this vaccine and if you look at their data, they’ve vaccinated 2.7 million people and 31 people have reported this clot.”

“But that is because Germany took a different approach to us,” the medical professional continued.

“It’s difficult to compare the two but we are waiting for more data,” Dr Amir explained before stating a Government advisor has suggested slowing down the rollout of the AstraZeneca jab.

However, the GP concluded that the “benefits still outweigh the risk” of getting the vaccine.