[Editor’s note: This story contains spoilers for “Severance” Season 1, including the finale.]

“Severance” Season 1 ends with one hell of a payoff: Helly R. (Britt Lower), the newest member of Lumon’s Macro Data Refinement pod, is an Eagan. So who knows what that whole “R.” thing is all about — but that’s (probably) not important right now.

What is vital as the excellent first season gives way to the just-renewed Season 2 is if Outie Helly (posing as her Outie counterpart, Helena Eagan, a member of the powerful family that not only runs Lumon Industries but essentially the entire town), Innie Mark (Adam Scott), and Innie Irving (John Turtorro) got enough time in the Outie world to get the message across about the evil deeds of corporate overlords.

Before Mr. Milchick (Trammel Tillman) put a stop to his subordinates’ ultimate insubordination, Helly was able to get out a few sentences to some very important people about the “torture” she and the others undergo inside the walls of Lumon Industries. Lower told IndieWire that she learned about the Helly R./Helena Egan twist “pretty early in the process” of taping episodes. “Severance,” like many series, shoots episodes out of order.

“For the purposes of Season 1, I kept myself pretty in the dark about what the Eagan family does and what Lumon Industries does,” Lower said. “Because I’m operating as the eyes of the audience, it felt important for me to remain in a state of discovery, being really hungry for the answer to what’s going on. Helly’s most-often-asked question is, ‘What the hell?’ And I wanted to be right in that state of investigation and curiosity.”

She’s still there. And even after watching the entire first season, which also stars Zach Cherry as Dylan and Patricia Arquette as Harmony Cobel/Mrs. Selvig, so are we. 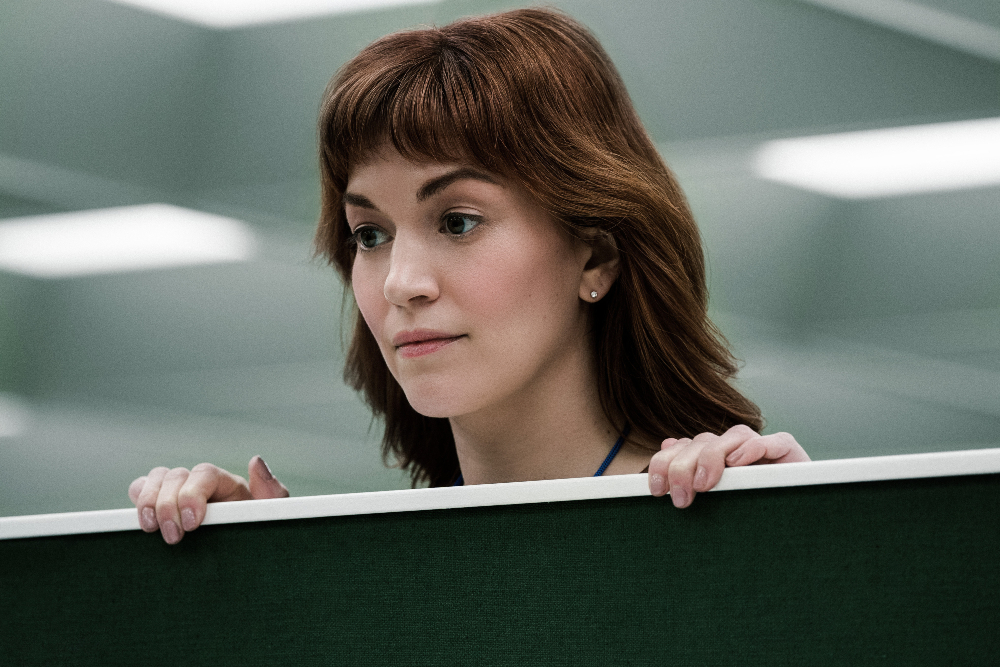 So don’t ask her about that stuff, super fans. (We know about the existence of the super fans based on the fan art. Here’s Lower’s personal favorite.) Also, while you’re at it, stop telling Lower all about your hatred for Outie Helly, who put — and kept — Innie Helly in her horrible situation. The actress, a real person and not the character who underwent the controversial brain surgery to “sever” her work conscience from her home one, understands the animosity, but she also thinks you’re looking at it all wrong.

“What’s fascinating about the show is that Helly on the outside and Helly on the inside — they are the same person,” Lower said. “There have been a lot of fans who expressed their disdain for Outie Helly, and rightfully so, but what I keep coming back to and the way I was approaching playing both of them was, you know the voice that we have in our head when we speak to ourselves unkindly? It’s oftentimes meaner than anything you would say to any other person on the planet.”

Believe us, Britt, we know that voice all too well.

“It’s a kind of poignant portrayal that we are often our own worst enemies,” she said. “This show is about compartmentalizing, and it’s a very human desire to want to compartmentalize something in our lives that we don’t want to face, whether it’s grief, or work, or a part of yourself that you don’t like. I think it’s really evocative that people are seeing Innie and Outie Helly as two separate people.”

“Severance” Season 1 is available to stream on Apple TV+. Season 2 has been picked up.

How old is Romeo Beckham and who is he dating? – The Sun