Home » When do UK cinemas reopen? Tickets on sale today: Unlimited films from £10 a month

When do UK cinemas reopen? Tickets on sale today: Unlimited films from £10 a month

Lockdown is officially ending and cinemas will be able to open at last on May 17. The good news for film fans is that there is a backlog of major releases lining up to finally take their place on the big screen. A staggering line-up includes James Bond: No Time To Die, Top Gun: Maverick, Venom: Let There Be Carnage, Mission Impossible 7 and Spider-Man: No Way Home.

Marvel is releasing Black Widow, Eternals and Shang-Chi and the Legend of the Ten Rings. Black Widow will go directly head to head with Fast and Furious 9 when both are released on July 9.

Vue cinemas announced this morning that tickets are now on sale for the first round of upcoming films which include Peter Rabbit 2 on May 17 and A Quiet Place 2 on June 4, as well as event cinema such as the Champions League and Europa League Finals. 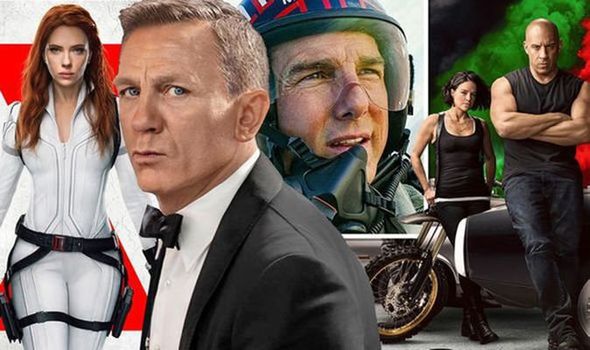 Odeon Cinemas are relaunching their Odeon myLIMITLESS card from just £9.99 per month (£11.99 in Central London) until 30 September.

UK CINEMA: DO YOU HAVE TO WEAR A MASK?

Major UK cinema chains including Vue and Odeon have confirmed to Express Online that all patrons must wear a mask, except when consuming food or drink.

All seating is socially distanced between each booking group. Screening times will also be staggered to minimise crowds in common areas and corridors before and after each film.

UK CINEMA: WHAT OTHER SAFETY MEASURES ARE IN PLACE?

Vue Cinemas have announced a fresh-air ventilation system where “fresh air is constantly brought into the venue where possible and not recicirculated.”

Vue and Odeon both confirmed to Express Online that all screening rooms will be cleaned and disinfected between every screening.

All food and drink will be prepackaged and contactless payment is in effect throughout.

SCROLL DOWN FOR UK CINEMAS HIGHLIGHTS IN MAY AND JUNE

Peter, voiced by James Corden, finally has a home with all his furry friends and the McGregors (Domnhall Gleeson and Rose Byrne) but can’t help making mischief all over again.

The latest Disney reworking of a classic villain’s origin story, starring Emma Stone as the titular fur-obsessed fashion designer, will be available simultaneously in cinemas and for a surcharge on premium Disney Plus.

Disney and PIXAR’s latest animated treat follows two adventurous young boys (who might also have a fishy secret) as they set out to explore life beyond the sea. The film will stream direct to Disney Plus as part of the standard subscription.

The sequel will pick up the pieces of Emily Blunt and her children fighting to survive after sound-sensitive aliens have devastated Earth.

After a brief detour with Hobbs & Shaw it’s back to the main franchise as Vin Diesel, Michelle Rodriguez, Tyrese GIbson and Helen Mirren rev their engines to take on John Cena and Charlize Theron’s returning cyber-terrorist.

Currently, this is will be the clash of the year as Scarlett Johansson’s Marvel hero attempts to outrace the Fast gang. Like Cruella, this will also be out in cinemas and simultaneously released on Disney Plus with a premium charge.

Tom Cruise is back after 35 years as the rebellious fighter pilot still fighting authority while Val Kilmer’s Iceman has gone on to become a four-star admiral. Jennifer Connelly is his latest love interest while Miles Teller plays the son of Maverick’s much-missed best buddy Goose.