Vanessa Kirby, Star of 'Pieces of a Woman,' Finds Art in Grief

TheWrap magazine: The actress also spoke with real mothers who had lost babies at different stages of pregnancy

This story about Vanessa Kirby and “Pieces of a Woman” first appeared in the Actors/Directors/Screenwriters issue of TheWrap’s awards magazine.

Vanessa Kirby has been the talk of awards season since she stunned audiences with her performance in “Pieces of a Woman,” a rare movie in this COVID year that debuted in front of a live audience. Kirby won the Venice Film Festival’s best-actress award, as well as Golden Globe and SAG nominations, for her performance as a woman who loses her baby during childbirth and spirals downward in the aftermath. Her work as Martha pulses with the raw pain and jagged wound of her loss.

The 32-year-old British actress won attention in recent years for her sharply etched turn as Princess Margaret in the first two seasons of “The Crown,” challenging her sister the queen (Claire Foy) with sarcasm, wit and an unrestrained penchant for alcohol. Kirby also had roles in the “Fast & Furious” spinoff “Hobbs & Shaw” and has been filming alongside Tom Cruise for two upcoming “Mission: Impossible” films. And she stars with Katherine Waterston in the new indie drama “The World to Come,” about two 19th-century frontier women in unhappy marriages who strike up a tentative romance.

Wrap editor-in-chief Sharon Waxman spoke via video to Kirby in London while both were in pandemic lockdown.

After shooting such an intimate film about such a vulnerable topic, how did it feel to watch it on a big screen with a large audience at the Venice Film Festival?
I was surprised at how vulnerable I felt about it, actually. I felt it quite intensely three times. Before I watched it myself for the first time. Then on my way to the premiere, my hands were shaking and I found it incredibly hard to watch. I almost didn’t want to. And then the week leading up to the release I felt physically quite sick.

I’ve only really just started to think about why — it was the biggest privilege of my life, going that deep into that female experience. When you leave parts of yourself on the floor, on the screen, it feels like someone is seeing inside of you. I wouldn’t have it any other way. Like having really thin skin. It’s such a profoundly painful experience, losing a baby. I had to live in that pain consistently in the shoot. 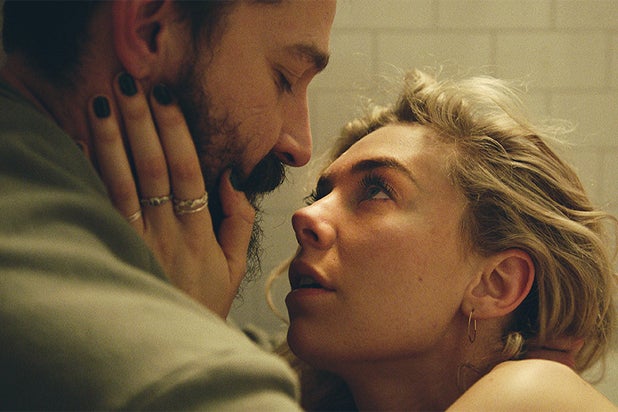 What did you do to prepare to play Martha?

I was quite daunted by it. On the page, I thought, it’s such an unusual exploration of grief. It reminded me of “Three Colors: Blue” (by Krzysztof Kieślowski) with Juliette Binoche — it’s always been one of my favorite films because her restraint is so unexpected.

Inherently, in a trope way, it’s a more masculine thing to keep it all in. I looked at performances that I most loved where it was all volcanic under the surface. I’m naturally quite an expressive person, I have trouble concealing how I feel. The biggest challenge is to work out, to trust, that as long as I could touch the depth of the feeling intensely enough inside and really feel it, I had to hope the audience would feel it too.

I felt an intense amount of humility. I’ve had losses in my life, extremely painful ones, months of going through grief and trying to find my way out of it. Those months can feel so lonely, with the world carrying on around, and you’re alone in your experience, having to keep going, and inside it’s this existential, cavernous vacuum of grief. I knew I could apply my own experience of grief and fully, sensorialy, understand the women I spent time with and shared their experiences with.

How did you do that?
That involved speaking to many different women who’d lost babies at different stages of pregnancy, or (who’d suffered) multiple miscarriages or stillbirth. One in particular, her name is Kelly and she lost her baby Luciana — I spent many days with her. She lost her daughter the same way Martha does. I knew that I had to inhabit her experience. Accumulate, consolidate, filter everyone’s experience into one person. All I thought about every day was them. I have a responsibility to them and their truth. I didn’t want to get it wrong for them.

How did you learn about portraying childbirth? That opening scene is the first 30 minutes of the movie and takes you through the process with such detail.
I found women to talk to me about their experience of it. And I tried to understand it to such an extent to do it justice. The movie is so unflinching. Some people think it’s incredibly hard to watch, but that experience is incredibly hard, and I’m proud that it’s unafraid to go there. Choosing the gravestone. Attempting to have sex. Going back to work for the first time. All these moments …

The leaky breasts …
Those are days some people don’t know about. It looks average, but someone could be going through something horrendous inside.

What did you mean when you referred to your own experiences of grief?
People that have died in my life — family members. When you lose something you love, a relationship. When you plan for something and it doesn’t happen. Suddenly, something is not there anymore. It’s missing a part of yourself. You never imagine that’s going to happen. I kept viewing it like a mirror that shatters into pieces all over the floor. There are shards everywhere and they’re all jagged and painful. Your life will never be the same again. How do you reorder reality and make peace with it?

What was the shooting like?
I was totally terrified. I thought, “If I get a second of this wrong, every woman will roll her eyes.” It felt almost sacred. I had to get it right for women. Even men that haven’t seen it — it’s a woman in her power, in her ultimate. It’s creation at work, when natural intelligence is running the show.

I started watching a ton of documentaries. None of them showed it. They edited to make it comfortable for the viewer. I’m no wiser for watching that. How much time is there between contractions? None of it was clear. Then I got desperate. I started writing obstetricians. And one finally said, “Come hang out in the labor ward.” I went back and back and back. I showed midwives the scene (in the script). They said, “That wouldn’t happen.” On my last day there, a lady had just come in dilated nine centimeters. The midwife said, “Let me see if she’ll let you sit in.” She did. I watched for eight hours. This woman in her full power, surrendering to the agony and the beauty. I saw all of life in this afternoon, which changed me forever. After that I thought, “Now I’m ready to get it right.” I tried to access the space that she was in–the most primal, most animal. Febrile. Magic. I thought, “If I can get my mind out of the bloody way, my body knows.” 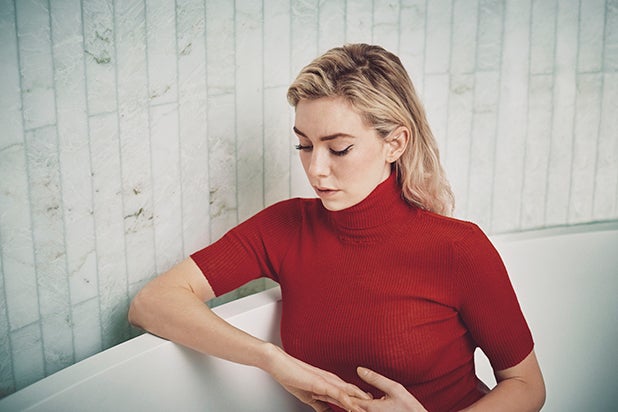 Did you do more than one take of the childbirth?
We did four takes the first day, two the second. It was bliss, really. I hope I give birth one day. It was bliss because I got out of my way, and I allowed my body to do it. You’re forced to trust. It was an unbroken take. We only had two days, there was hardly any money on the movie. And it was bliss because I don’t know if I’ll ever again have the opportunity to do a quarter of a film that is one take without interruption. You got to play with no one coming in with makeup checks or lighting checks. You’ve got to just be. I’m not sure you can beat that, really.

It strikes me that British theater and film is so often about dialogue and text. This is the opposite of that — it’s mainly emotion propelling the story.
I didn’t know if I could do it. I have an empathy, I think, now. My empathy has expanded for the quiet struggles people go through when it’s too painful to share. It’s an exploration of a family having such different experiences, and they literally don’t know how to talk to each other about it.

What are your other ambitions after a film like this? I know you are shooting “Mission: Impossible.”
With “Pieces of a Woman,” “The World to Come,” there’s a real stake in the ground. And I’m very linked to Margaret (from “The Crown”). It was the first time I had space and hours to draw a full-bodied character, to create a messy, flawed but brilliant Technicolor-type person. I’d been waiting to do my first lead part. I’ve been on many sets doing really small parts, watching how different people do it. I would never take that lightly. I was waiting for the right thing. When I read “Pieces” I thought, “This is it.”

I’m so drawn to the complexities of the opposites we all have. And representing women on screen that I recognize. I’d rather do a birth that has lots of burping in it, and it’s not comfortable and has the ugly or gross parts of life mixed in. All the shades of what it is to be a human. And that transcends gender, too. We’re really beginning to aim to put women on screen (who are) the full range of human. Not a film version of a woman that I find intimidating. I want to look at women on screen in all the messiness and feel, “I’m just like that.” Even if you’re a royal princess. Even if you’ve lost a baby. You might have had a relationship break down, or been in love with someone you couldn’t be with, as in “The World to Come” — I just want to push into corners we haven’t seen before. That’s my ideal. 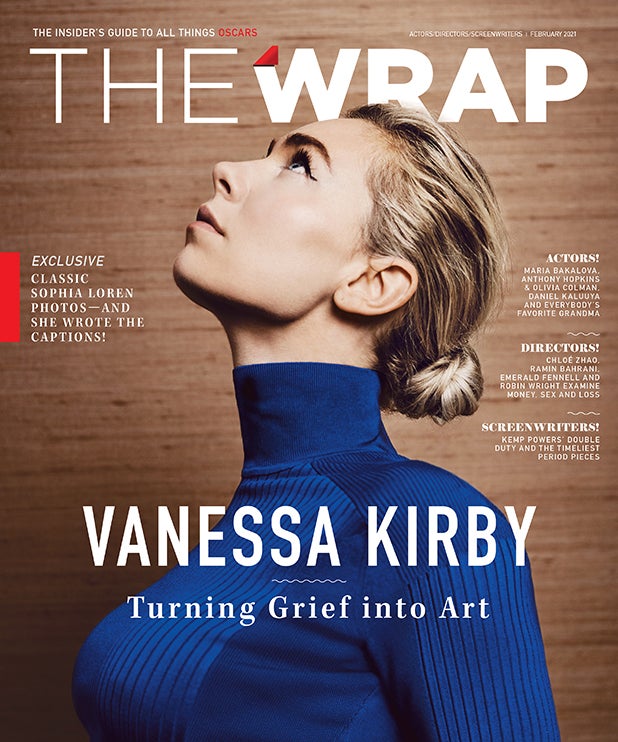