Appearing on Mark Steyn’s GB News show, Matt Hoy opened up for the first time about why he left the band in June last year. The vocalist, who was in UB40 with Ali Campbell and Astro for 11 years, blasted his former bandmates for having his career taken away from him.

UB40 was originally formed in 1978, although, in 2008, lead singer Ali Campbell left and joined forces with Matt as a vocalist.

In 2014, long-time member Astro left the original UB40 to join Campbell and Hoy to form the breakaway band UB40 Featuring Ali Campbell and Astro. However, Astro died in 2021 from a “short illness”.

During the segment on GB News, Matt told the host he couldn’t have the vaccination due to medical reasons.

“To have your entire career taken away from you over a jab is a terrifying prospect. This is discrimination,” the singer fumed. 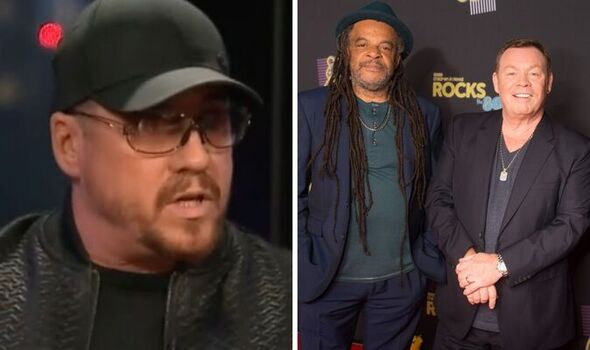 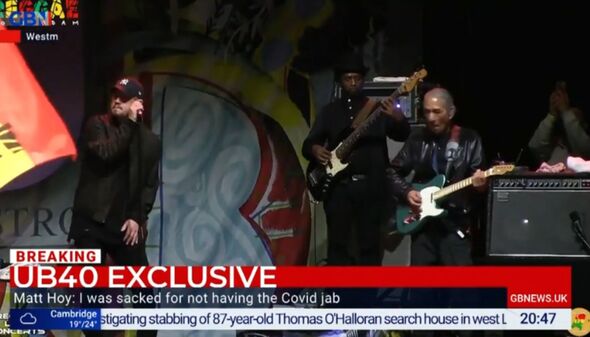 “Being in the band was like having a second family, where was the loyalty?”

He later went on to explain that he got poorly after taking the flu vaccine, and so, was advised by his doctor not to have the COVID-19 jab.

“I was never an anti-vax,” he insisted. “I had the flu vaccine.

“I have a cardioversion, which is to put my heart back into rhythm, I have an irregular heartbeat. 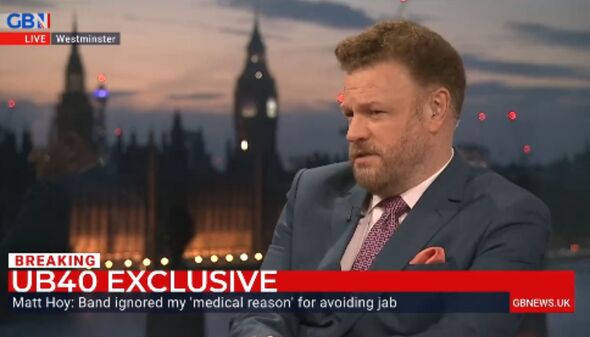 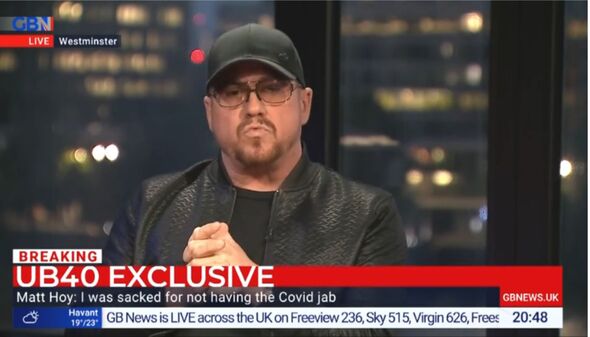 “My doctor advised me to have the flu jab because I was vulnerable.

“Two days afterwards I had a growth on my lymph node and that through my heart back out of rhythm, so there was no way I was going to risk having this vaccine just so I could go back on the road.”

Matt went on to recall how the band’s management sent him a text, giving them the “green light” to go on tour, but each member had to have the vaccine.

“The band knew my situation health-wise,” he added. “I’ve had this for quite some time.

“I was hospitalised in Dundee before a show, so they know the situation.

“It was really unfortunate to receive those messages in the way…you kind of build a relationship with these people.”

“They become your family,” he said before explaining: “And I didn’t even receive a phone call, no voice message or nothing, it was all done in text.

“So to gain clarity on it, I think it was in June time, I just said, ‘Look, unless I have the vaccine, I’m obviously no longer permitted to perform with the band,’ and they said, ‘No, that’s correct’.”

When Matt left the band, UB40 released a statement regarding the reason for his departure.

The statement read: “Firstly we would like to wholeheartedly thank Matt Hoy for his contributions to our projects and live shows for the last decade.

“This has been a very hard pandemic for the world and our industry to navigate and livelihoods still remain in the balance for many, whilst we respect everybody’s freedom of choice and decision regarding taking the vaccine unfortunately the EU and many other countries have quarantine periods and legislation in place that makes touring and performing incredibly difficult for us to be able to plan for obligated dates.

“The vaccine is backing everybody into a corner, nobody should be forced to take it however we are restricted in how we can play whilst being able to tour ‘freely’ and trying to limit as many issues as possible.

“We remain in limbo regarding travel, live shows continue to be rescheduled, could there have been resolve? Most probably as nobody knows what’s around the corner but this was Matt’s decision to leave.

“We would like to wish Matt all the best in his future endeavours and thank him once again.”

Express.co.uk has reached out to UB40 and Ali Campbell for comment.