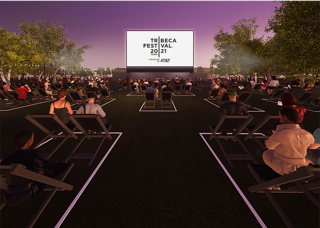 The Tribeca Film Festival is moving ahead with its 20th-anniversary edition this June, moving screenings to outdoor venues and becoming the first major U.S. film festival held in person since the start of the COVID-19 pandemic.

As part of the festival, outdoor screenings will be held in all five New York City boroughs using portable 40-foot LED screens that will travel to different venues; community screenings will be included as part of the program. Among the venues that have been confirmed so far are Brookfield Place New York, Pier 57 Rooftop, The Battery, Hudson Yards in Manhattan, Empire Outlets in Staten Island and MetroTech Commons in Brooklyn.

“Tribeca is a community of the most resilient and talented storytellers on the planet. In 20 years, our community of creators and partners have become a family,” Tribeca CEO and co-founder Jane Rosenthal added. “This summer we are excited to reunite as Tribeca becomes a centerpiece of live entertainment in neighborhoods across New York City.”

The announcement comes as approximately 45% of movie theaters in New York City have reopened after being closed by the pandemic for nearly a year. So far, the city has administered over 3.7 million doses of the COVID-19 vaccine as it races to contain the virus and end the pandemic before more infectious variants can cause another outbreak. On Monday, the number of COVID-related deaths in the city passed 26,000.

The 2021 Tribeca Film Festival will be held June 9-20. The opening and closing films, as well as the festival’s complete lineup, will be released at a later date.