Starring Andrew Garfield as Larson, Netflix’s tick, tick…BOOM! will premiere in theaters on November 12, 2021 and will hit streaming a week later on November 19th.

Garfield plays Jon, a young theater composer who’s waiting tables at a New York City diner in 1990 while writing what he hopes will be the next great American musical. As described by Netflix: Days before he’s due to showcase his work in a make-or-break performance, Jon is feeling the pressure from everywhere: from his girlfriend Susan (Alexandra Shipp), who dreams of an artistic life beyond New York City; from his friend Michael (Robin de Jesús), who has moved on from his dream to a life of financial security. Amidst an artistic community being ravaged by the AIDS epidemic, Jon feels the clock ticking and faces the question everyone must reckon with: What are we meant to do with the time we have?

Larson, of course, would not live to see the success of his “next great American musical,” dying at age 35 on Jan. 25, 1996, the morning of Rent’s first Off Broadway preview. The cause of death was an aortic aneurysm caused by undiagnosed Marfan’s Syndrome.

The film, which also stars Joshua Henry, MJ Rodriguez, Bradley Whitford, Tariq Trotter, Judith Light and Vanessa Hudgens, will mark Miranda’s feature directorial debut. In 2001, Miranda, then 21, was writing In The Heights when he attended an Off Broadway revival of tick, tick…BOOM! In 2014, Miranda, who would later say that Rent inspired him to begin writing musicals, portrayed Jon in a two-week Encores! production of tick, tick…BOOM!

tick, tick…BOOM!, with a screenplay by Steven Levenson based on Larson’s musical and choreography by Ryan Heffington, is produced by Brian Grazer, Ron Howard, Julie Oh and Miranda, with Celia Costas, Julie Larson and Levenson as executive producers.

Watch the trailer above and see the key art below.

The first single from the film’s official soundtrack entitled “30/90” is available here. Performed by Andrew Garfield and featuring additional vocals by Joshua Henry, Vanessa Hudgens, Mj Rodriguez, Alexandra Shipp and Robin de Jesús, the track is the lead offering from the full soundtrack of music written by Jonathan Larson as heard in the film. 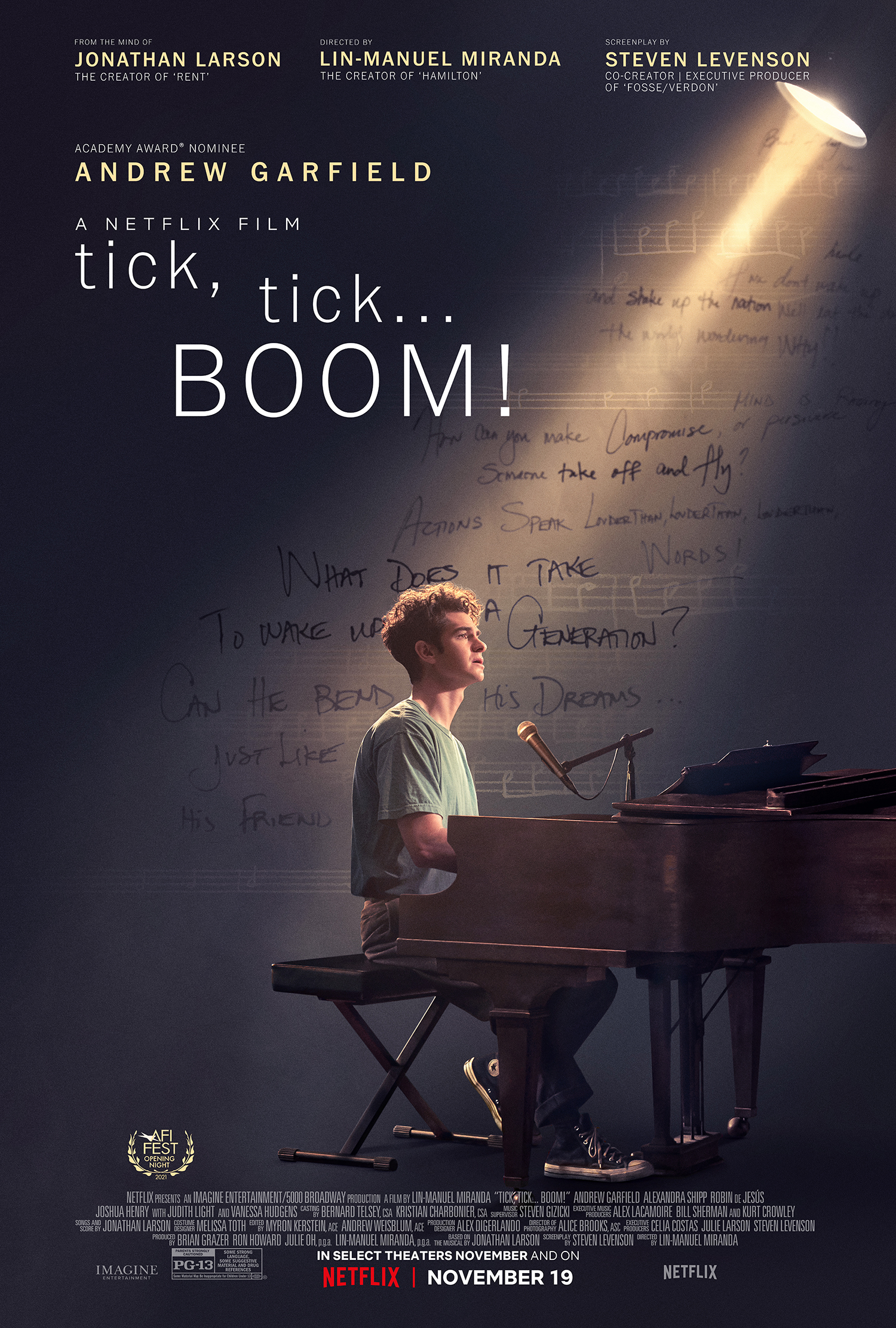