Even a spoof needs stronger plotting and villains, if only to provide a place to hang the jokes 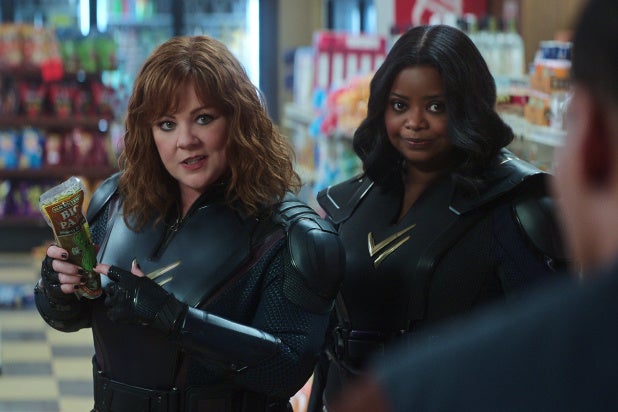 Ben Falcone has yet to succeed behind the camera as a director the way he has in front of it as a performer, but with “Thunder Force” — his fifth go as a filmmaker, with his wife Melissa McCarthy once again his leading lady — he’s finally starting to get the hang of it.

This shaggy superhero spoof doesn’t consistently live up to its best moments, but at least those moments are there, with most of them stemming from the hilarious interplay between McCarthy and Octavia Spencer as former childhood friends reunited as very different adults. There’s a great comedy waiting to be made starring this twosome, and when it does, we can look back at “Thunder Force” as the team’s somewhat underwhelming launch pad.

Cast to type, McCarthy plays Lydia, a beer-swilling (hence the constant Heileman’s Old Style product placement) forklift operator, while Spencer is Emily Stanton, a CEO and one of the world’s leading geneticists. The two met in grammar school when Emily went to live with her grandmother after Emily’s parents were killed by Miscreants, sociopaths who gained superpowers when outer-space radiation struck the Earth.

Emily’s late parents devoted their lives to figuring out how to give powers to regular people, and their daughter has spent her entire life obsessed with completing their work, a single-minded focus that drove a wedge between the two girls at the end of their high school years. When adult Lydia comes to Emily’s office to coax her into attending their class reunion, Lydia accidentally injects herself with a strength formula that Emily was about to take for herself.

Since the process can’t be reversed, Emily turns Lydia into the strongest person on the planet while giving herself drugs that will allow her to make herself invisible. Once the two have completed their treatments, they hit the streets of Chicago as Thunder Force, ready to apprehend the powerful and cruel Miscreants.

So far, so good: Falcone’s script gives McCarthy plenty of opportunities to tap into her gifts for physical comedy, whether she’s unwittingly injuring a hapless sparring partner with her superpowers or trying to squeeze herself into the purple Lamborghini that Emily has customized to be their super-car. But any genre spoof needs a plot and an antagonist that are dynamic enough to create a structure on which the gags are hung, and “Thunder Force” offers neither.

Bobby Cannavale — who co-starred in the last Falcone-McCarthy collaboration, 2020’s dreadful “Superintelligence” — makes for a hum-drum bad guy, and the “twist” reveal of an additional villain will come as no surprise to anyone who’s been paying attention. (Legendary Chicagoan Roger Ebert would refer to this as the “Law of Economy of Characters.”) Pom Klementieff’s talents are mostly wasted as a super-powered meanie, and Jason Bateman, as a crab-clawed Miscreant, is far more fun to watch as a potential romantic partner for Lydia than as one of Cannavale’s henchmen.

The film doesn’t entirely understand the tropes at play — if Emily is a scientist and mogul important enough to be discussed on the news, why is she surprised that people recognize her, unmasked, as a member of Thunder Force? — but it is, at least, very matter-of-fact about having two superheroic leads who don’t fit the usual on-screen paradigm. Apart from a conversation between Cannavale’s and Klementieff’s characters about where in their 40s Lydia and Emily are, the worst epithet thrown at our leads is “nerd,” which we’ve seen Emily brush off since childhood.

McCarthy and Spencer make fun foils for each other, and it’s clear they’re enjoying each other’s company, which boosts the subplot about the dissolution and revival of Lydia and Emily’s friendship. Some of the running gags (Lydia’s unusual meal choices post-enhancement) work until they don’t, and some of them don’t work at all (the jokes pinned to 80s and 90s pop songs feel mostly lazy), but there are enough comic jolts along the way to make “Thunder Force” an actual mixed bag, which is a step up from flat-out disasters like “Tammy.”

Falcone has yet to supplant Paul Feig as the premier director of McCarthy comedies — and granted, “Bridesmaids,” “The Heat,” “Spy,” and the underrated “Ghostbusters” (2016) ranks as an impressive run among actor-director collaborations — but this outing nudges Falcone’s standing the tiniest bit higher.