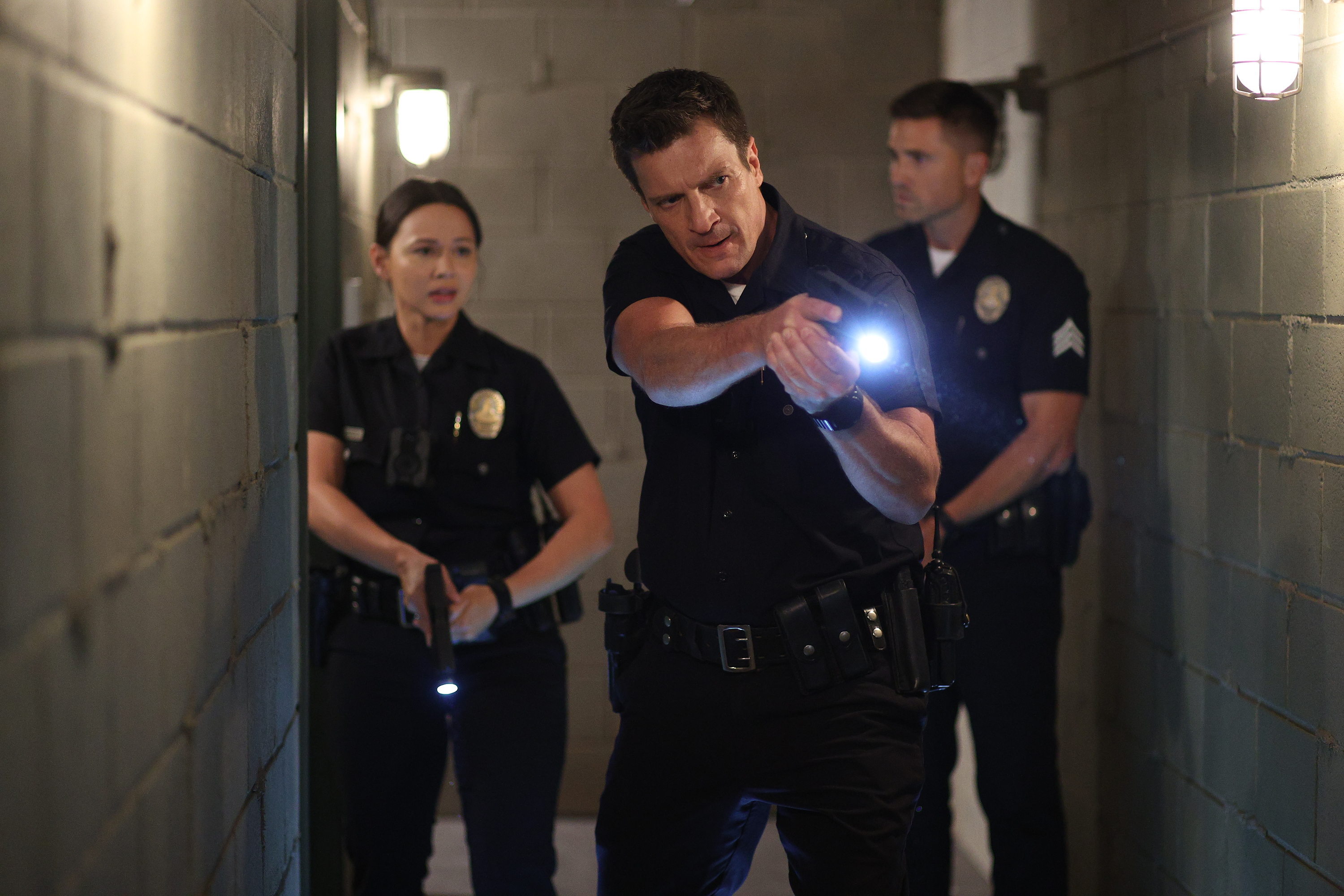 American police drama The Rookie has supposedly banned the use of live guns on set following the fatal shooting of Halyna Hutchins during the filming of Alec Baldwin’s movie Rust.

This week, it emerged that there had been a tragic accident on the set of Rust when 42-year-old Hutchins, who was the director of photography, was reportedly shot in the stomach when Baldwin, 63, discharged a prop gun during filming.

It was reported that the incident – which also saw director Joel Souza, 48, be shot in the shoulder – occurred when a live round was fired on set from the gun.

In the wake of the tragedy, ABC procedural The Rookie, which stars Nathan Fillion in the lead role, has taken action to provide better protection for the members of its crew.

In a memo sent to staff by showrunner Alexi Hawley and obtained by The Hollywood Reporter, it was announced that live weapons would not be allowed on set, banning the use of quarter or half loads.

While for the past two seasons, the show has predominantly used CGI to depict muzzle flashes on screen, it’s said that live weapons were used on ‘big, outside set pieces’.

In his memo sent out on Friday, Hawley wrote: ‘As of today, it is now policy on The Rookie that all gunfire on set will be Air Soft guns with CG muzzle flashes added in post. There will be no more “live” weapons on the show. The safety our cast and crew is too important. Any risk is too much risk.’

The showrunner said that if anyone on set feels ‘unsafe’ or witnesses ‘anything that concerns’ them, he would encourage them to report it, adding: ‘My door is always open.’

He also expressed his condolences for Hutchins’ loved ones and concern for Souza following his injury, stating: ‘The tragic events in New Mexico yesterday have shaken us all, and our hearts go out to the friends and family of Halyna Hutchins and Joel Souza.’

Who is Halyna Hutchins?

Halyna Hutchins, a mother of one, was born in the Ukraine and grew up on a Soviet military base in the Arctic Circle before attending Kyiv National University.

After graduating with a degree in international journalism, she worked as an investigative journalist for British documentaries in Eastern Europe.

However, Hutchins’ true passion lay in filmmaking, and she moved to Los Angeles, where she got work as a production assistant and a grip electric.

She also shot her own short films, inspired by cinematographers including Christopher Doyle and Sergey Urusevskiy.

On the advice of cinematographer Robert Primes, Hutchins enrolled the filmmaking MFA programme at the American Film Institute Conservatory in 2013 and graduated two years later.

In 2018, Hutchins was one of eight female cinematographers selected for the inaugural 21st Century Fox DP Lab, and in 2019, she was chosen as a Rising Star by American Cinematographer magazine.

Hutchins went on to work on films including horrors The Mad Hatter and Darlin’ and police drama Blindfire, and the BET+ series A Luv Tale: The Series.

She also worked on the Joe Mangianello mystery thriller Archenemy, which premiered at Beyond Fest 2020 and received a nomination at the Sitges International Film Festival.

Paul Biddiss, a firearm expert and military technical adviser for film and TV, told Metro.co.uk that the accident has sparked many questions surrounding the prop masters and armourers on the set of the film.

‘Live rounds should never be brought onto a film set. To hear that a live round was actually on set is unbelievable. I just don’t get it… that is a very strange to happen,’ he said.

What is a blank?

A blank is a firearm cartridge that generates a muzzle flash and an explosive sound like any normal gunshot, and the firearm experiences a recoil capable of cycling its action, but without shooting a projectile.

Blank cartridges comprised of most parts of real ammunition – the casing (or shell), propellant material (gunpowder) which is inside the casing) and a primer on the bottom of the cartridge – apart from the projectile (or bullet).

Blanks are often made of wads of paper, plastic, felt or cotton, however they are propelled at high velocity and are far from harmless with injuries occuring if there is something in the barrel that comes in contact with the releasing gas of the blank.

‘There’s no armourer I’ve ever worked with who would ever advocate bringing in live rounds because then something like this can happen.’

Biddiss said that he found out ‘really bizarre’ that a live round made its way onto set, stating: ‘I simply question how you could load a live round when you’re supposed to load blank round. I just don’t get it, it’s really bizarre.’

In a statement shared online, Baldwin said: ‘There are no words to convey my shock and sadness regarding the tragic accident that took the life of Halyna Hutchins, a wife, mother and deeply admired colleague of ours.’

The actor said that he was ‘fully cooperating’ with the police ‘to address how this tragedy occurred’, adding: ‘I am in touch with her husband, offering my support to him and his family. My heart is broken for her husband, their son, and all who knew and loved Halyna.’