The Real Reason Jacob Elordi Cut Off His Mullet

Jacob Elordi hails from Australia, and unless you watch “Euphoria” or “The Kissing Booth” movies, you may not know who he is — but you will likely be hearing his name more and more in the coming years. Elordi dated his “Kissing Booth” co-star Joey King, which seemed to delight fans, but they broke things off in November 2018, according to Us Weekly. The then-newly-single Elordi intrigued fans, many wondering who he would date next, but he didn’t make anyone wait too long. According to Harper’s Bazaar, Elodi supposedly linked up with Zendaya before the coronavirus pandemic. They too would split, however, leaving Elordi on his own once more.

In September 2020, however, Elordi stepped out with a new gal — model Kaia Gerber. According to Entertainment Tonight, the pair enjoyed a meal at Nobu Malibu and were Instagram official about a month later. Dating for almost a year, Elordi and Gerber do their best to keep their relationship off of social media — but Elordi fans will be forever grateful to Gerber for the shirtless Elordi Instagram pic she shared on his birthday.

On August 17, Elordi made his in-person talk show debut on “Jimmy Kimmel Live!” and talked to guest host Julie Bowen about his life — and his hair. Fans of the modern day heartthrob probably noticed that he recently chopped his locks — and he revealed the real reason he did so. And, believe it or not, Gerber actually had a say in Elordi’s recent hairstyle change. Keep reading for more. 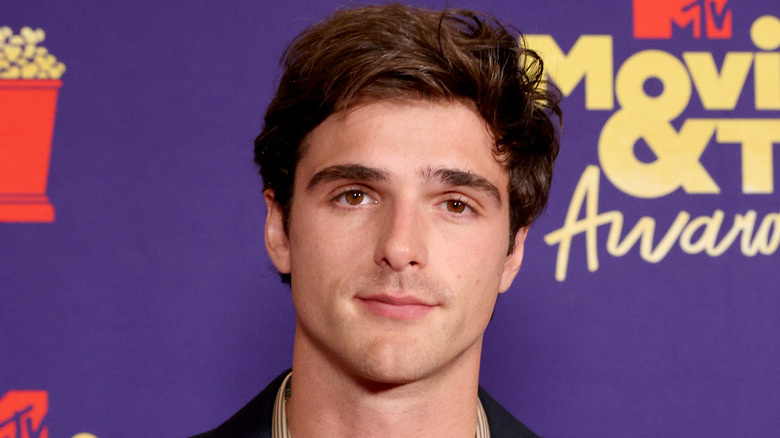 In chatting with Julie Bowen on “Jimmy Kimmel Live,” Elordi revealed that he had always wanted a mullet — but said that his mother wouldn’t let him grow his hair out. “My mom never let me have one because she wanted me to be a gentleman, presentable,” he explained. Evidently, he went against his mother’s wishes during quarantine, and grew his hair into a mullet. Bowen pulled out a photo of Elordi sporting a mullet, and said, “Apparently, you won this one. You got yourself a mullet, Jacob Elordi.” But the mullet is now long gone. The actor revealed that it was actually Kaia Gerber who decided that it was time for the mullet to go.

“My girlfriend, within a week of us dating, she cut it off. She took me to the bathroom and she got scissors and she cut it off,” Elordi told Bowen. “She said, ‘You’re cute, but [you’re not that cute],” he added. Elordi has kept his hair short ever since. It must be love!