Home » TV & Movies » 'The Matrix Resurrections': 1 Meta Shot in the Trailer Breaks the Reality About the Filmmaking Process 'The Matrix Resurrections': 1 Meta Shot in the Trailer Breaks the Reality About the Filmmaking Process

After much anticipation, the first trailer for The Matrix Resurrections finally dropped. The latest chapter in the Wachowskis’ The Matrix franchise offers fans a tantalizing glimpse at the new movie. Though the teaser gives viewers (what seems to be) a good idea of what’s to come, some moments have left people scratching their heads and speculating. Overall, the trailer seems to want viewers to feel like reality is turned on its head, so it’s fitting that one Easter egg represents that sentiment well.

The new trailer for ‘The Matrix Resurrections’ raises tons of questions 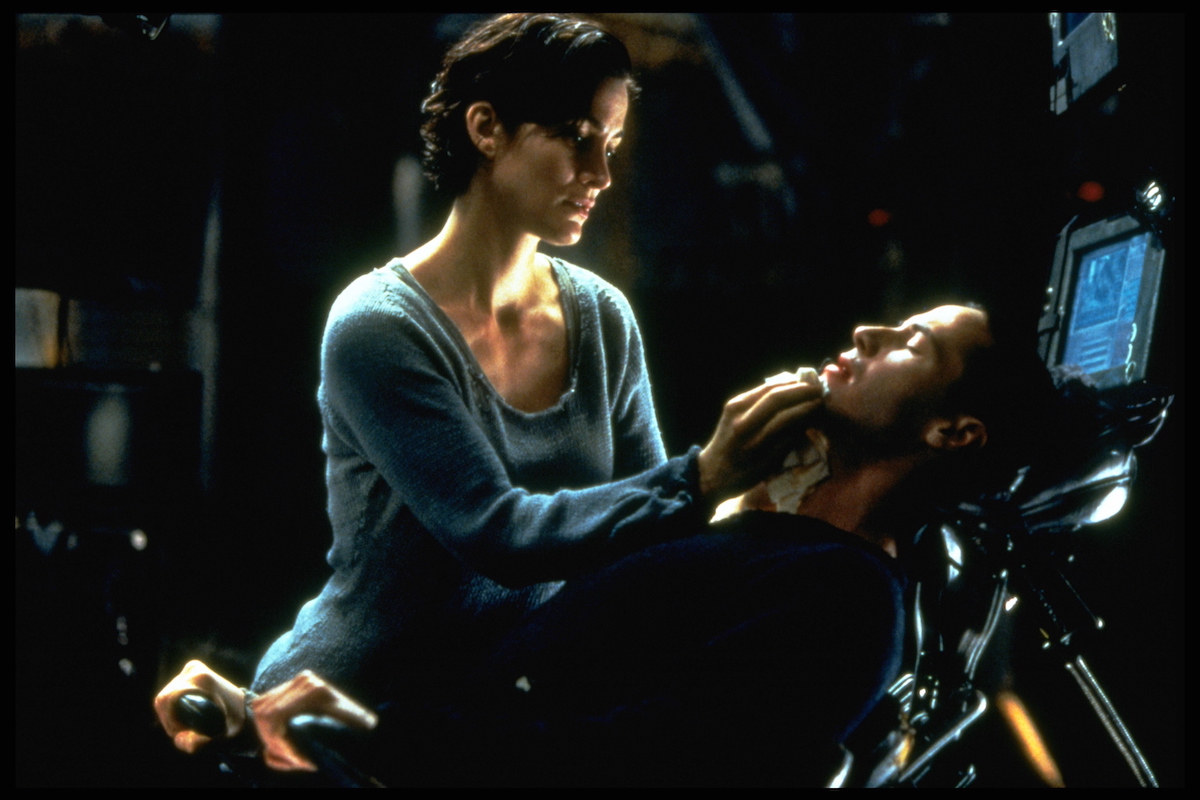 Despite its less than three-minute runtime, the official trailer for The Matrix Resurrections delivers a ton of interesting scenes and provocative dialogue.

The teaser opens with Neo, played by a John Wick-looking Keanu Reeves, in a therapy session. Once again, calling himself Thomas Anderson, he appears to believe his adventures in the past three films were all in his imagination. Notably, he seems to take a blue pill to deal with the thought that reality might be less real than it should be.

But viewers know this isn’t true. Between shots that mirror those in the other films — like what looks to be Neo’s body in the hands of the machines and a re-creation of his “rebirth” upon taking the red pill — things start to get out of hand when Carrie-Anne Moss reappears as Trinity. Though she and Neo claim not to know each other, their reactions show they begin to remember.

From there, we watch as Neo reawakens his powers to face off against the Agents once more. Joining up with a slate of new resistance fighters and someone who resembles his old mentor, Morpheus, Neo again must become The One and free himself from the Matrix.

Near the beginning of the trailer for The Matrix Resurrections, flashes of what could be memories, imagination, or even future scenes of the film appear during Neo’s therapy session. There’s a lot to dig into here, but one shot, in particular, is pretty intriguing.

It shows Neo walking down a street at night while nearly the entire cityscape around him glows in the illuminated green code of the Matrix.

On the surface, it’s an interesting way to represent Neo’s growing realization that his supposed fantasy is anything but. But dig deeper, and it seems like a metaphor for the filmmaking process itself.

Like the Matrix, much of what we see onscreen today isn’t real — at least, what the actors are doing. With practical effects being less and less critical to filmmaking, CGI is the name of the game. Actors can be anywhere and do anything thanks to computers, which, again, is like the Matrix seen in the movies.

Fans are speculating about what they’ve seen

The trailer’s release spurred many viewers to speculate about the new movie’s plot. Given the teaser’s deliberate vagueness, that was probably the intention. So far, plenty of the fan theories are fun to think about, and some might even turn out to be true.

One thing that really got people talking was scenes from a movie playing in the background of a few shots. What was the movie? It was none other than The Matrix. The implications are staggering, with some fans thinking it could mean the machines created the original film to pacify the Matrix’s inhabitants. Other viewers believe it might be a projection of Neo’s memories cut together as a movie.

But the biggest tease involves Morpheus — or, at least, someone who claims to be him. Actor Laurence Fishburne famously played the character in the original Matrix trilogy and is the only main-trio member to survive till the credits in The Matrix Revolutions.

However, Fishburne will not reprise the role in the latest film. Instead, Candyman actor Yahya Abdul-Mateen II will play the character in The Matrix Resurrections. Is this recasting for the sake of it, or could it be a link to The Matrix Online, a now-defunct massively multiplayer online game (MMO) where players saw what appeared to be Morpheus’ death at the hands of an assassin?

Only time will tell, as Fishburne has offered no explanations when asked.