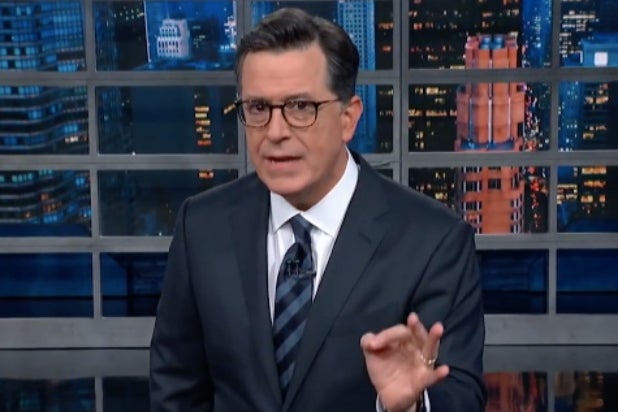 “The Late Show With Stephen Colbert” will become the first late-night show on broadcast to return with full episodes next week.

“I’m staying at home and so is everybody who works for me, but thanks to some amazing work by my staff and the CBS broadcasting folks, we will be back on Monday with new Late Shows,” Colbert announced in a tweet on Wednesday. “Until then-Stay Strong!”

It builds on Colbert’s move to start shooting monologues from home. The short segments aired on CBS on top of repeats, but the new episodes will mark the first full episodes back since the coronavirus pandemic forced all the late-night shows to suspend in-person taping.

Most hosts have been recording at-home segments and interviews since the shutdown, including self-recorded monologues and video interviews with guests. Trevor Noah’s “Daily Show” was the first to return with full episodes, temporarily rebranded as “The Daily Social Distancing Show,” earlier this week.

A number of other cable late-night hosts have similarly pledged to return with new full-length episodes recorded at home, including “Real Time With Bill Maher,” “Full Frontal With Samantha Bee,” “Conan” and “Last Week Tonight With John Oliver.”

Where is The Trouble with Maggie Cole filmed? – The Sun
Recent Posts

How Comedian Bert Kreischer's Drive-In Shows Rescued His Tour From the Pandemic
08/11/2020
Categories
We and our partners use cookies on this site to improve our service, perform analytics, personalize advertising, measure advertising performance, and remember website preferences.Ok