AceShowbiz -“The French Dispatch” cast has become trending on Twitter. After one picture of the cast at the Cannes Film Festival red carpet made its way to the blue-bird platform, many of its users turned the image into hilarious memes.

The photo in question features Timothee Chalamet, Tilda Swinton and Bill Murray posing along with director Wes Anderson at the Tuesday, July 13 event. While the snap seemed normal, the disparity between their outfits, haircuts and even the way they’re standing, couldn’t help but trigger a great meme-fest.

In the picture, Timothee could be seen sporting a casual look by wearing a T-shirt, black pants and matching Givenchy boots. Wes, who was standing next to him, kept it formal with a pastel suit, brown tie and white loafers.

Tilda, on the other hand, was stylish in a bright aqua blue Haider Ackermann suit, heels and a pair of sunglasses. As for Bill, he looked as if he just got back from a beach trip with a printed button-up shirt, baby blue shorts, sneakers and a fedora hat.

The photo has since gone viral. One Twitter user quipped alongside the snap, “Tiktok-LinkedIn-Instagram-Twitter.” Another wrote, “NYMAg, The Atlantic, The New Yorker, Harpers.” A third then mentioned some names of Radiohead‘s studio albums. ” ‘[The Bends]’, ‘[Ok Computer]’, ‘[Kid A]’, ‘[Amnesiac]’.”

One individual listed some names of musicians such as Troye Sivan, Beck, David Bowie and Brian Wilson. Another person tweeted, ” ‘Mad Max’, ‘Road Warrior’, ‘Fury Road’ and ‘Beyond Thunderdome’.” Someone else then chimed in by jokingly noting, “Zoom presentation attire, remembering how I dressed before Zoom, imagining how I’ll dress after Zoom, how I’ll actually dress after Zoom.” 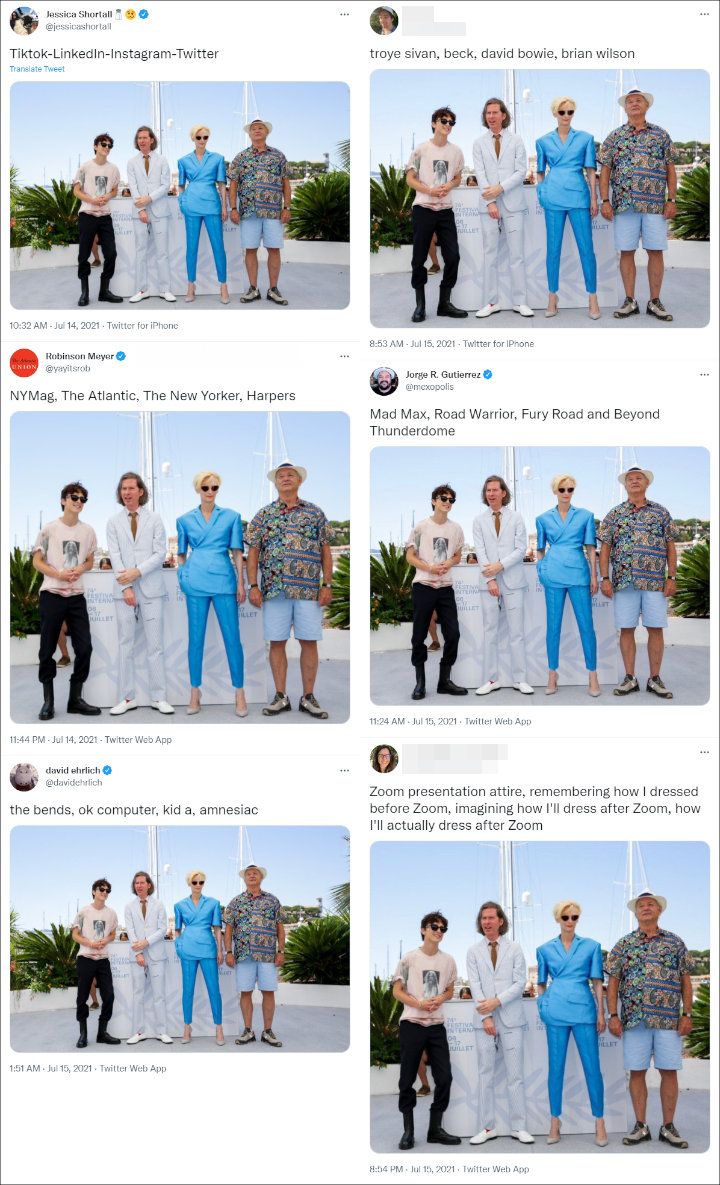 A photo of ‘The French Dispatch’ cast has turned into memes.

Memes aside, “The French Dispatch” had its world premiere at the Cannes Film Festival after it was initially scheduled for release in October 2020. The movie also stars Frances McDormand, Elisabeth Moss, Saoirse Ronan, Adrien Brody, Benicio Del Toro, Lea Seydoux and Jason Schwartzman.