Home » Susanna Reid shut down by Williamson after being slated by Alan Duncan: ‘Obviously not!’ Susanna Reid shut down by Williamson after being slated by Alan Duncan: ‘Obviously not!’

Susanna Reid, 50, was joined by Mr Williamson, 44, to discuss the outrage which has been sparked over the idea a European Super League could be launched with six Premier League clubs taking part. However, towards the end of the interview on Good Morning Britain, the ITV journalist wanted to ask about Sir Duncan’s, 64, new tell-all book, In the Thick of it, where he slates his former colleague and the current Education Secretary. Not wanting to delve on the matter too much, the guest gave a very blunt answer to the presenter’s question as he tried to shut down the conversation.

Sir Duncan’s book hit the shelves earlier this month and it gave a scathing review of Williamson being appointed Defence Secretary in 2017.

According to a diary extract contained in the publication, the former ex-Foreign Office minister wrote that his colleague was “ludicrously unqualified”.

He wrote: “Gavin Williamson [has] threatened to bring down May if she doesn’t increase defence spending, saying ‘I made her, so I can break her.’ He really is a venomous, self-seeking little s***.”

Reid put to the politician some of the words Sir Duncan used to describe and he replied he “hadn’t purchased” one of the books.

“Maybe that’s something for me to read in the summer holidays,” the guest added. 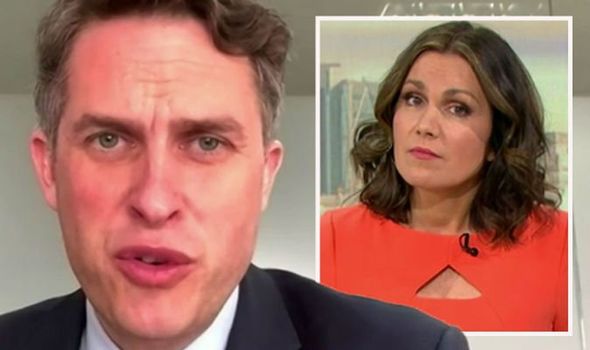 “Did you get on?” the presenter asked and immediately, Williamson shut her down as he replied: “Obviously not.

“My focus is always on the job I’m doing,” he added.