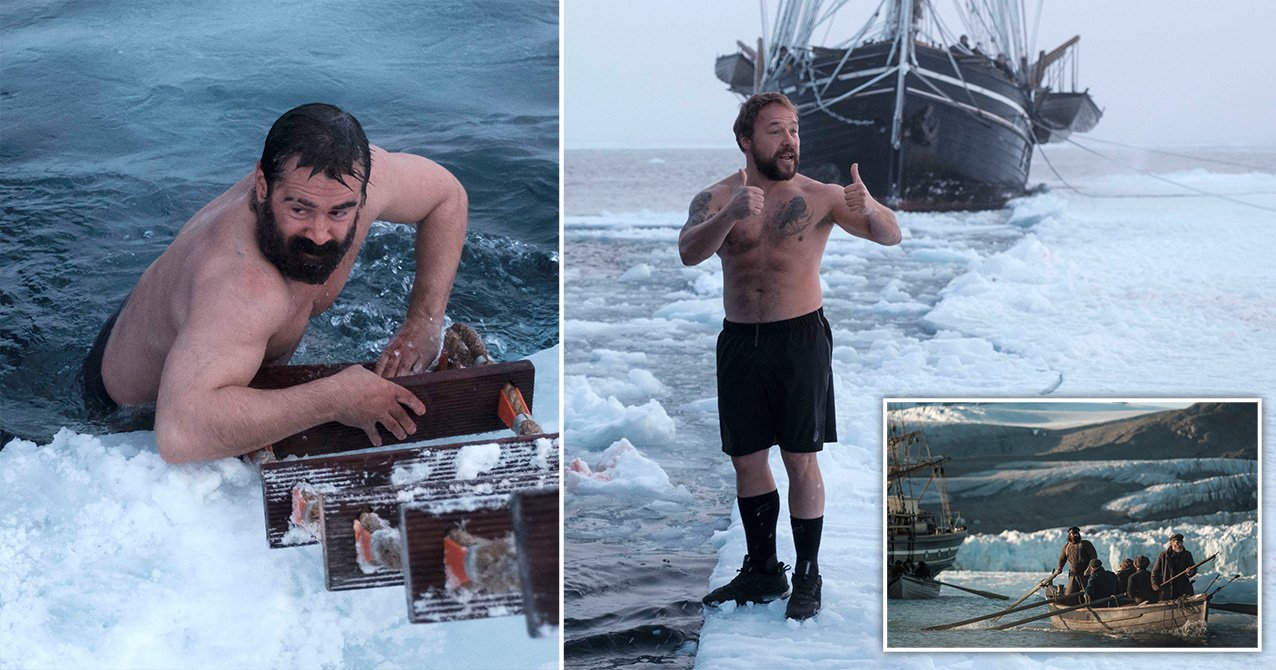 In a behind-the-scenes look, the actors are seen braving the Arctic Ocean, where much of the filming took place as the cast and crew worked entirely offshore.

Line of Duty star Stephen, 48, seems to take the freezing temperatures in his stride as he flashes camera crew a thumbs up, while In Bruges actor Colin, 45, seemingly clings to a ladder for dear life as he hoists himself back to safety.

They also went completely topless in the scenes, despite the ocean’s temperature sitting consistently at the freezing point of seawater.

Colin said of the icy ocean dip: ‘That was lovely, one of those rites-of-passage things, the polar dip. God, it was cold, to state the obvious, a dip in the Arctic Ocean, it was terrifying.

‘I only went in the once, but I think Jack O’ Connell went in a couple of times. He got the bit in his teeth. I was in and out fast. It was cold.’

Much of the filming took place north of the Svalbard Archipelago, a Norwegian archipelago in the Arctic.

According to the Visit Svalbard website, average temperatures in the summer months, listed as mid-May to September, can range between 3C (37.4F) and 7C (44.6F), with temperatures in the winter months of October to May dipping to as low as minus 30C (minus 22F).

Colin recently admitted he felt that ‘death was only a misstep away,’ as he filmed at 81 degrees north – further north, it is believed, than any drama has filmed before.

Speaking to Metro this week, The Lobster actor said: ‘We were shooting on moving ice floes and the ice would crack, a walrus visited us on set as we were shooting. We’d have four spotters, one on each corner with a rifle and binoculars.

‘The 10 times or so they spotted a polar bear, a horn would blair and we’d have to get back on the boat until it had gone. The bears and their cubs were beautiful, majestic, but, y’know, keep them away from me…’

He also said the role was challenging, but had a great impact on him personally.

‘It was tricky, it was wonderful, it was extreme, an experience I never thought I’d have and my life feels the richer for it.’

The Total Recall star plays Drax, a feral harpooner who locks horns with Captain Brownlee (Graham) and surgeon Sumner (Jack O’Connell) on an 1850s whaling voyage to the Arctic.

The harpooner happens to be ‘a brutish killer whose amorality has been shaped to fit the harshness of his world.’

Captain Brownlee hopes to ‘escape the horrors of his past,’ but ‘finds himself on an ill-fated journey with a murderous psychopath.’

The nautical five-part drama is based on the book by English author and academic Ian McGuire, set in the middle of the 19th century.

The North Water debuts on BBC Two on September 10 at 9.30pm. All episodes will stream on BBC iPlayer from the same date.