Spoiler alert! Do not proceed if you have not watched the series premiere of Big Sky. You may lose your head…

What started off as a by-the-book investigation into the abduction of two teenage girls in a small town in Montana quickly devolved into a high-stakes murder mystery on Monday’s series premiere, when private investigator Cody Hoyt (Ryan Phillippe) was shot and killed at point-blank range by the seemingly innocuous local state trooper Rick Legarski (John Carroll Lynch) just as they were about to set off to find answers. Turns out, Legarski was secretly working in tandem with Ronald Pergman (Brian Geraghty), the creepy truck driver responsible for kidnapping the two girls. When Cody started poking around and asking the right questions, he had to be eliminated.

“I love the fact that with this shocking ending… it sets the bar in regards to the danger that lurks within the show, in that anybody could be hurt at any time,” Phillippe tells ET of his character’s bloody demise. Phillippe always knew his time on Big Sky was limited, but when he sat down to read the script, he completely forgot about Cody’s fate: “How often are you really that shocked by what you watch?”

Based on the 2013 novel The Highway by C.J. Box, Cody’s stunning death in the premiere’s final seconds will reverberate throughout the rest of the season, though it may take his ex, Jenny (Katheryn Winnick), and his latest hookup, Cassie (Kylie Bunbury), a while to figure out what actually happened to him — that he’s six feet under somewhere and not on a bender. Such is life in a sleepy town like Big Sky.

ET spoke with Phillippe about playing a dead man walking, why he had to spill the beans to his mom about his character’s surprising death, if this is the last we’ll see of him and why he’s nervous about the fan response.

ET: Let’s get right into it. When you signed on to Big Sky, did you know you would be a dead man walking, metaphorically speaking?

Ryan Phillippe: (Laughs.) In all honesty, yes, I did know. I did know that it was a short commitment for me. I can’t remember whether or not my agents told me that he died at the end. Regardless, on my first read of the script, I had forgotten by the time I got to the end. And so, I’m like, “All right, this love triangle, they’ve all got to solve this thing and this weirdo cop…” And then bam! I’m like, “Whoa.” I didn’t see it coming either, and I wasn’t familiar enough with the books to know the fate of the character. I was pretty shocked, but I think it’s interesting. Today, entertainment has become so predictable and a lot of times, network TV even more so where you see the twist coming a mile away, you feel like you know exactly what kind of show you’re getting into. I love the fact that with this shocking ending, first of all, it sets the bar in regards to the danger that lurks within the show, in that anybody could be hurt at any time. As much as I’m afraid of the backlash from my fans, who were expecting a series with me in every episode, there is a playful part of myself that is going to enjoy the response, just because how often are you really that shocked by what you watch?

You said you forgot once you started reading the script that Cody dies. Personally, I was stunned. What was your take on Cody’s gruesome, bloody demise?

I love the fact that it comes out of a situation that feels very safe or normal. You’ve got this small-town cop that I’m a little bit irritated by. I’ve probably dealt with guys like that in the past, and he just seems like a goofy, lovable guy or whatever. And so, Cody absolutely does not see it coming. I think the challenge for John Carroll Lynch and I, and Paul McGuigan, the director, was to make sure that as we played those scenes leading up to it, you don’t tip the hand. You play against what’s going to ultimately end up happening because you want people to have the reaction that you had and that I hope others have. 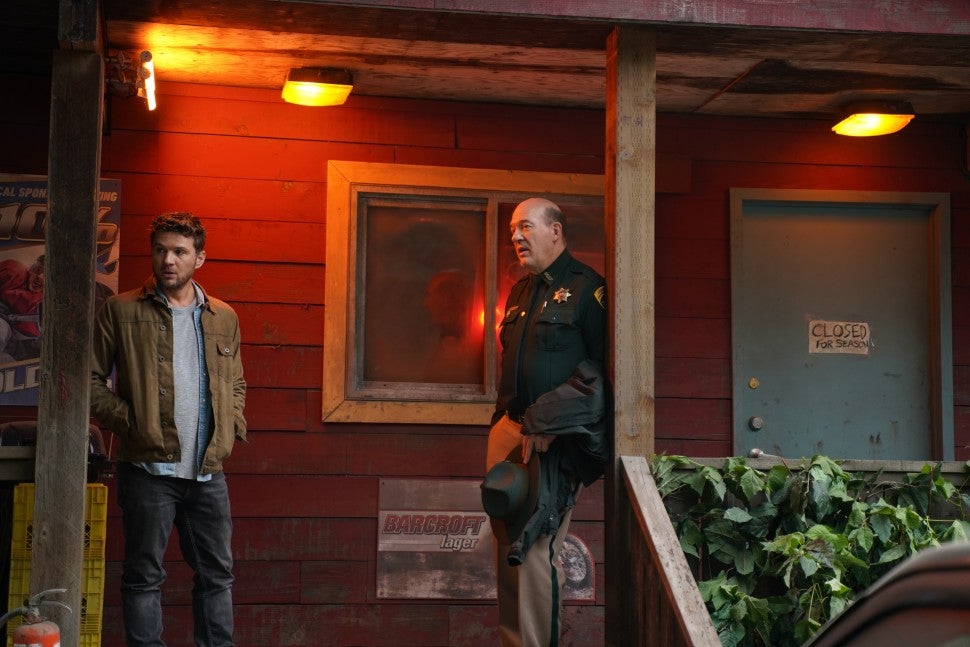 Did you find yourself trying to pitch your way out of dying?

(Laughs.) Yeah. I mean, no, it’s a funny thing. It’s a great question. I love David E. Kelley’s work. This cast is phenomenal. I think the show’s going to do very, very well. But I knew for me, it was a short commitment and I had other projects. I leave [Tuesday] for a movie in Utah. And later on this year, we’re doing the MacGruber TV series for Peacock. For me, whether I wanted to stay on or not, I had other commitments and this was meant to be just a short [job]. We were supposed to shoot this before the pandemic. We were in pre-production. Everything gets shut down and this was only supposed to be two weeks work for me, and it ended up being three-and-a-half months because of all the COVID protocols, the quarantining in Canada. We had to shut down at some point early on because tests were getting backed up. It’s just funny because I had looked at this as, “This will be a cool little project to do for two weeks.” And it ends up, cut to a year later, I’m in Canada for three months, you know?

Cody’s a detective. He’s supposed to be keying in on weird, suspicious things. When Legarski tells him, “Women have gone missing here before,” it seemed to be a bit of a red flag. Should Cody have been clued in more that this officer isn’t 100 percent trustworthy?

The other thing is, he was woken up in the middle of the night by his son, saying his girlfriend is missing. Then one of his associates connects him with her friend, who’s a small-town sheriff in the area. And small-town sheriffs are of a certain ilk, and I think Cody expects Legarski to be a little bit off. For Cody, in his mind, it’s the beginning of starting the search for these girls and that’s what he’s hyper-focused on — to the point where I don’t think he would’ve picked up on anything. The guy’s [Legarski] a police officer too, remember. He’s got the full outfit and the hat and the whole deal.

Is this the last we’ll see of you?

It is not the last you’ll see or hear of my character. I do show up in a flashback sense and they’re still — through the next couple episodes — trying to find out what happened to him. The character is kind of alive, in show terms.

Can you talk about how much more of a presence you’ll have?

I wouldn’t want to get too specific, other than to say that there are some moments where you get a glimpse into how the relationship between Cody and Kylie’s character [Cassie] was beginning to take shape. You also get a glimpse into the family life, with Katheryn[‘s character, Cody’s estranged wife, Jenny,] and their son and some of the issues that were going on in that marriage as it began to end. It’s sort of things like that.

Before his death, Cody is in the middle of a messy love triangle between his ex, Jenny, and her best friend, Cassie. Did his relationships with these two women represent different things to him? What did he get out of both romances?

Yeah. I think that they did represent two different sides of his own personality. Cody had struggled with alcoholism. This is something that’s referenced at points later in the series. Part of his getting clean and sober was maybe there was some volatility in the marriage with Katheryn’s character. Part of getting clean and sober and making those changes meant that he had to start a new life. I think that’s what the appeal was with Cassie or how the triangle took shape.

How long do you think it’ll take for anyone to even notice that he’s six feet under somewhere, not just missing or that he left town?

There is a process of them finding out and discovering. And there’s a moment, I believe, where they’re questioning: Did he fall off the wagon? Did he go somewhere and get drunk? Is he in a gutter somewhere? They’re kind of spinning in regards to trying to figure out what has happened, and I think it takes a little bit to get there.

Even though your time on Big Sky was brief, what was most memorable about being part of this world?

The cast is phenomenal. Everybody is really wonderful. Working with John Carroll Lynch was a big deal for me because I’d been a fan of his and seen a lot of his work. But the other thing is, you want to be a part of projects that are valuable, that have great people involved. Something I particularly love about Big Sky is how well-developed and multi-dimensional these female characters are, and getting to work with David E. Kelley and to read his words. He has such a distinct style, and to see him working in a genre that we don’t normally associate him with is also fun. You don’t really associate David E. Kelley with thriller-mystery, and it’s been fun to watch him work all that out creatively.

I’m bummed that your character had to die the way he did, but it’s such a jaw-dropping moment…

So was my mom. I had to give her the heads up. She hates when I die. I die in so many projects, and she’s like, “Why do you always have to die?” But for this one, I was like, “Mom, you can’t say anything. This isn’t really my show. I’m just in the beginning of it.” And she was not pleased. But I think a lot of my fans will be… I’m really kind of nervous about my social media notifications, in the moments after the ending, but that’s part of the fun.

The Bachelorette Ignites a Feud Between 2 of Tayshia Adams' Men

All 35 of People's Sexiest Man Alive Choices, Including Michael B Jordan
Recent Posts