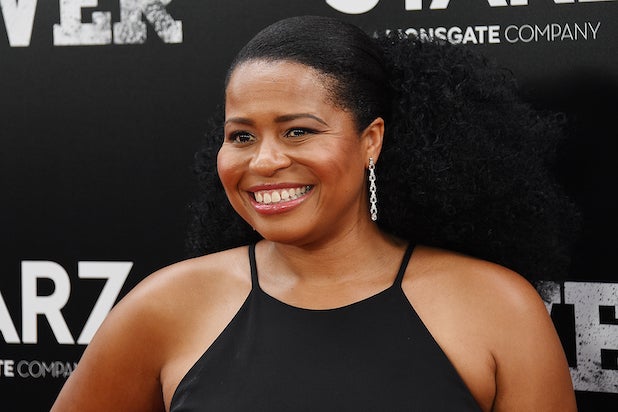 “Power” creator Courtney Kemp has some very straightforward words of wisdom for other women in power: “don’t react, respond.”

“I always have advice for women who are bosses,” Kemp told reporters during the Starz drama’s final season panel at the Television Critics Association’s press tour Friday. “It’s always the same thing. Which is, when you are angry, speak lower. Use the words ‘I am disappointed,’ not ‘I’m angry.’ And remember that silence is your most effective weapon. Don’t react, respond.”

When a reporter referred to Kemp and Curtis “50 Cent” Jackson — who was on stage next to her — as the co-creators of “Power,” Kemp corrected them, saying she is the sole creator and she and Jackson are both executive producers.

“I think if I were the man and he were the woman that wouldn’t happen,” she said.

Continuing her advice to ladies at the top, Kemp said: “If you’re a woman in a position of power, you’re already behind the 8 Ball. Everybody else is starting on 2nd base. And so you have to figure out how you’re gonna run your business, you have to figure out how you’re going to manage men above, below you and to your sides. Because it is different.”

She added that “there are some ways where it is easier to manage as a black woman than as a black man, because I’m not as threatening in some situations as I might be in others.”

Just ahead of the “Power” panel featuring Kemp and Jackson, it was announced the final season of the Starz drama will be split into two parts and is getting an aftershow. You can read more about that here.

The first half of “Power” Season 6 premieres Sunday, Aug. 25 on Starz.

Naomie Harris on her harrowing Who Do You Think You Are? experience
Recent Posts