Naga Munchetty was left very confused on BBC Breakfast as she mistakenly believed a cyclist pictured in a newspaper was facing up a steep hill rather than downwards. However, when Charlie Stayt pointed out her mistake, BBC’s Naga grew frustrated at him laughing at her blunder and light-heartedly threw the newspaper at him.

Charlie began: “Can I just point out this picture to you? I know we’re talking about exercising. I’m not suggesting people should try this if they’re going out for their hourly exercise.

“This is a stunt cyclist Danny MacAskill who is quite extraordinary if you’re ever watched any of the things he does.

“He’s on the Isle of Sky and that’s him and that’s where he’s going. It’s just extraordinary the things he does.”

Interjecting, Naga said: “So when you’re out cycling is that how it is?” 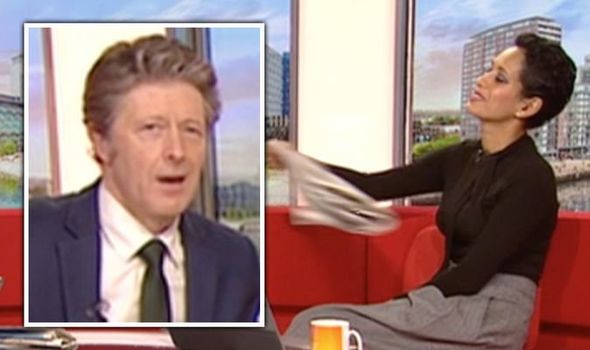 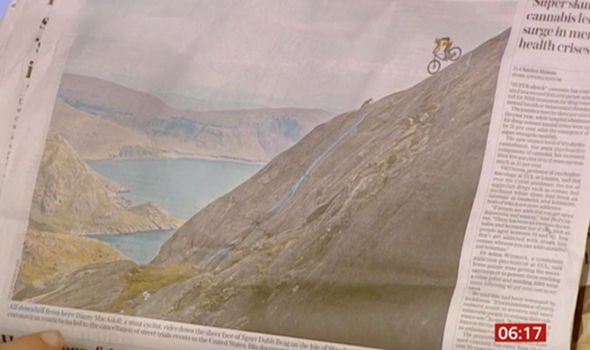 “It’s really not like this,” Charlie replied. “Similarities, my bicycle has wheels. That’s pretty much where it stops.”

“How fast do you think he would have to cycle to get up there?” Naga asked.

Confused, Charlie repeated: “Get up there?”

“Well when you’re going up a steep slope you have to get up pretty fast otherwise you’re going to stop,” she explained. 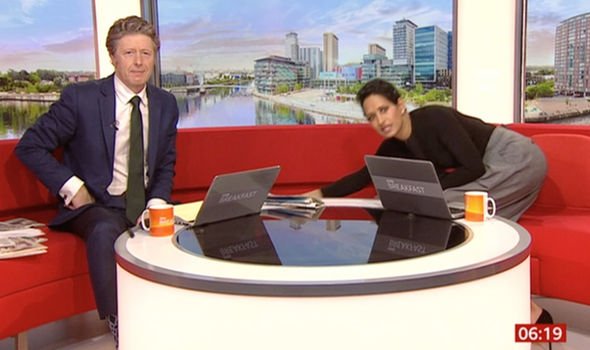 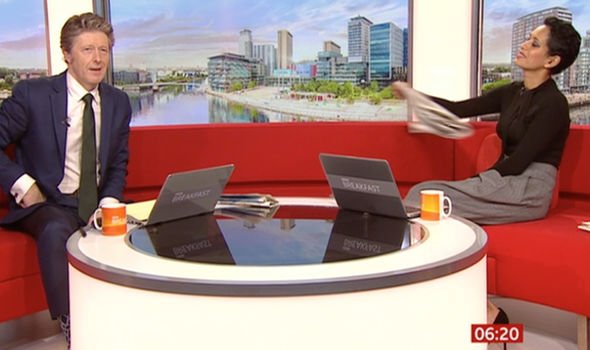 Pointing at the picture, Charlie said: “The thing is right, I don’t think he cycled up here.”

“How do you know?” his co-host hit back as Charlie explained: “I think what he did was he got up there and the stunt is to come down it.”

“But he’s facing up,” Naga incorrectly pointed out.

“We can let Danny MacAskill know,” Charlie said. “The stunt you would like him to perform is to cycle up the hill.”

“No, he’s facing up, isn’t he?” Naga said and her co-host added: “Look normally on a bicycle you’re going in the direction your head is facing towards.”

“I thought he was going up the other way,” she replied before swiftly moving on. “Look here’s a story, so Charlie you may like this.”

“Have we moved on?” Charlie asked. “Have we established which way round you cycle a bicycle? That was a surreal moment.”

Not wanting to dwell on the mistake, Naga began reading a story about a ferret who survived after accidentally going for a full cycle in its owner’s washing machine.

“It was an innocent [mistake]. Can we just make really clear when you’re holding something this far on away, cam you tell from this angle which way the cyclist is facing?” Naga asked before throwing the newspaper at her co-host.

“No you can’t it just look like a person on a bike. You’re actually sweating because you’re holding in the laughter.”

“All I’ll say is if anyone sees someone sitting backwards on a bicycle in or and around Manchester in the next couple of days we’ll know who it is,” he added pointing at Naga.

BBC Breakfast airs daily on BBC One at 6am.

What Was Cicely Tyson’s Net Worth at the Time of Her Death?

Dwayne 'The Rock' Johnson reflects on move that catapulted him to stardom: 'Hell of a risk'
Recent Posts