BBC One viewers are used to seeing Naga Munchetty and Charlie Stayt sitting on the infamous red sofa on a Saturday morning, but today, they were absent. Instead, Nina Warhurst and Roger Johnson were delivering the news from BBC Breakfast. As for who made up the rest of the presenting news, the usual journalists across Sport and Weather were present.

At six am when the show kicked off, Nina was heard saying: “Good morning, welcome to Breakfast with Roger Johnson and Nina Warhurst.”

“Good morning, our headlines today; more than two-thirds of people in England are living under the strictest Covid restrictions as more areas move into tier three,” Roger began explaining to those watching at home.

“The government says there’s growing concern about a new strain of the virus which seems to be spreading rapidly in the south-east,” Nina continued.

And Roger took over: “Teachers and school governors say that plans to test million of school pupils in England after Christmas are ‘undeliverable.’” 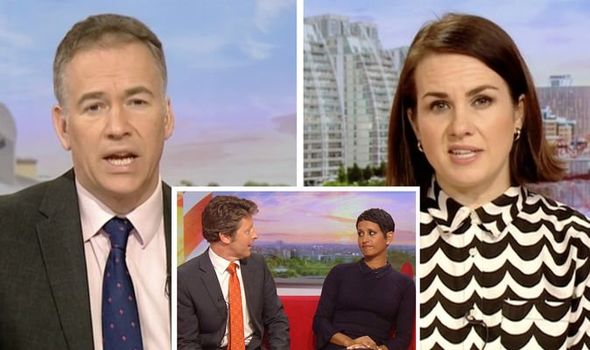 We will use your email address only for sending you newsletters. Please see our Privacy Notice for details of your data protection rights. Naga Munchetty addresses Carol Kirkwood’s brutal BBC Breakfast swipe

To complete the top news, Nina added: “And the ballroom battle for the Glitterball is nearly over – we look back on a Strictly series like no other.”

The camera then panned across the studio to Mike Bushell.

He said: “Well, there’s a change of direction for sports funding in the UK!

“New sports like climbing and surfing get funding, while more traditional ones see their budgets trimmed. But how will this affect the medal count?” 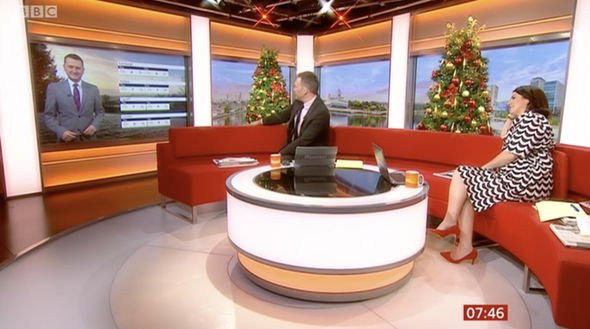 And Matt Taylor was delivering the weather forecast for viewers: “And the persistent rain which has brought swollen rivers to parts of England and Wales is on its way out, it’s going to be a weekend of sunshine and showers.

“Details of that and the prospect for Christmas week coming up,” the meteorologist added.

Nina has presented BBC Breakfast on several occasions, sometimes even with Charlie.

She usually delivers the Business report during the week. 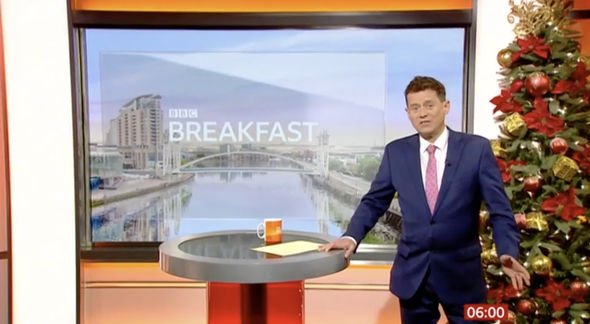 Rodger, on the other hand, is the main presenter for the regional news programme BBC North West Tonight.

As for where Naga and Charlie are, in the run up to Christmas their hours – as well as Louise Minchin’s and Dan Walker’s – change.

Last year, Naga presented the main morning show, and she was joined by Matt for the weather.

So perhaps she is due to return next Friday to host and is therefore having a weekend off.

It comes after yesterday’s show when Nick Miller was seen presenting the weather.

Carol Kirkwood was absent from duties.

BBC Breakfast airs every day at 6am on BBC One.

'Love & Hip Hop': Why a Couple From the Show Practiced Celibacy