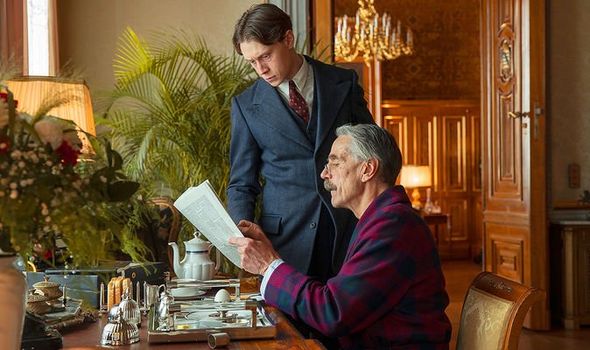 It’s hard to overstate the enduring power of newsreel footage showing the Prime Minister’s infamous return from the 1938 Munich Conference. When faced with the choice between negotiation or confrontation with a foreign power, every subsequent British leader has had to grapple with these images. Do they want to be a paper-waving Chamberlain or a cigar-chomping Churchill?

Jeremy Irons’s Chamberlain is nobody’s fool. He’s a wily schemer prepared to tarnish his reputation to buy time to re-arm and prepare his nation for an inevitable war.

Here, Chamberlain’s machinations are seen through the bewildered eyes of Hugh Legat, one of the PM’s aides, played by George MacKay.

That friendship is put to the test six years later when Western leaders are summoned to Munich for negotiations with Adolf Hitler (Ulrich Matthes) over a potential invasion of Czechoslovakia.

Unbeknownst to Chamberlain, the secret service have tasked Legat with collecting stolen Nazi documents from Paul, now a disillusioned translator for Hitler.

Ultimately, we all know how the main story will end. But director Christian Schwochow crafts some wonderfully tense moments as Legat dodges Nazi goons and Paul endures chilling close encounters with the Fuhrer.

Irons balances these slightly outlandish genre elements with a convincing, touching and strangely timely performance as the selfless old strategist.

Does Britain need another Churchill? Or is it time for a new Chamberlain?

In cinemas now, on Netflix from January 21