Love Islanders received a dressing down on tonight’s challenge.

The “Sidebar of Shame” segment featured tabloid headlines about the contestants with the names covered.

Islanders then had to throw drinks on each other to determine who the headlines were about.

After last night’s explosive teaser between Belle Hassan and Molly-Mae Hague which saw the Essex makeup artist swil the social media influencer, fans were gunning for a showdown.

Despite their drama-filled wishes, many were left disappointed as the real reason Belle and Molly-Mae locked horns was do to with the challenge and nothing else.

Belle decided to launch a cocktail in Molly-Mae’s money maker as she thought the 20 year old was the person in question behind the headline which stated they were “pretending to be happy for Curtis and Maura’s relationship”.

One wrote: “Love Island got you all lot gassed over the Belle clip just to find out it was a challenge.” 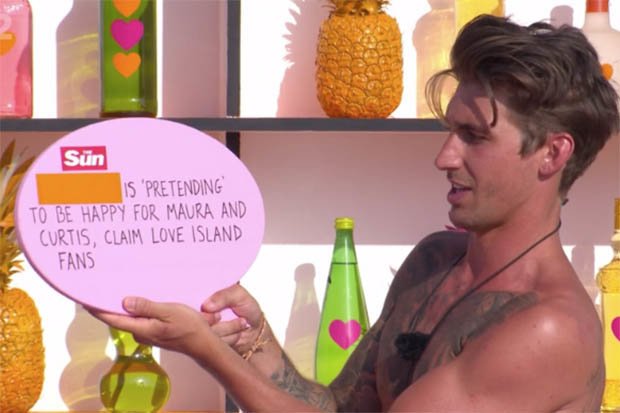 “Anyone else think Belle actually threw a drink at Molly-Mae last night?”

“Anyone feel let down my Love Island tonight? I was hoping the Belle/Molly-Mae situation was going to be better than that”, a second fumed.

Another viewer chimed in: “Anyone else think Belle actually threw a drink at Molly-Mae last night?”

While a fourth put: “Love Island catfished us with that preview of Belle and Molly-Mae.”

Elsewhere on the show, other contestants were left realing over the hard-hitting headlines.

Maura Higgins was annoyed after her “manly” comments about Curtis Pritchard were questioned by viewers at home, while Ovie began to doubt India who, according to fans, is only coupled with the basketball star for the £50k.