Prehistoric comedies are littered throughout TV history, from the time of the “Dinosaurs” to when “Cavemen” walked the Earth, but “Human Discoveries” — the new Facebook Watch comedy (yes, Facebook is still making scripted TV) about a primitive group of people who fumble their way through humankind’s most significant industrial and social innovations — probably shares the most significant DNA with “The Flintstones.” The ’60s sitcom foraged for laughs every week by putting its cave-people through modern scenarios, like when Fred decides to race in the Indianrockolis 500 or when Wilma challenges her husband to take on her duties as a housewife.

“Human Discoveries” starts a bit further back in the timeline — at the dawn of civilization, before couples have settled into traditional archetypes, but after the “hunter” and “gatherer” roles have been gendered. And yet its conversations are similar. Sure, this Zac Efron and Anna Kendrick-starring comedy features more adult themes and outlandish humor, but it’s still trying to juxtapose an age-old setting with contemporary ideas. To say it succeeds might be going too far — there’s more potential in the premise than what’s explored through the first four episodes — but there are far worse things you could spend your time watching on Facebook.

Meet Gary. Voiced by Efron but lacking his prominent physique, Gary is a man caught in the middle of the food chain. He’s not strong enough, aggressive enough, or even big enough to become a fearsome warrior, nor does his sensitive demeanor befit someone who prefers throwing spears to picking daisies. Gary watches as the group leader, Ugg (Paul Scheer), tears through the jungle hunting tigers to protect the camp and killing elk just for the fun of it. He has no interest or ability in mimicking Ugg, but he still wants to win the heart of Jane (Kendrick).

Jane is an unfulfilled gatherer. Spending her days picking berries alongside her friend Minerva (Jillian Bell) just isn’t enough for her, and she longs to serve a greater purpose and rebels against the accepted standards of their little society. Her rebellious spirit isn’t exactly embraced by the camp, but obviously it’s embraced by Gary, and the two find common ground in the simple desire for more — they want more to life than to just survive, but they have no words or concrete ideas as to what that “more” might be. 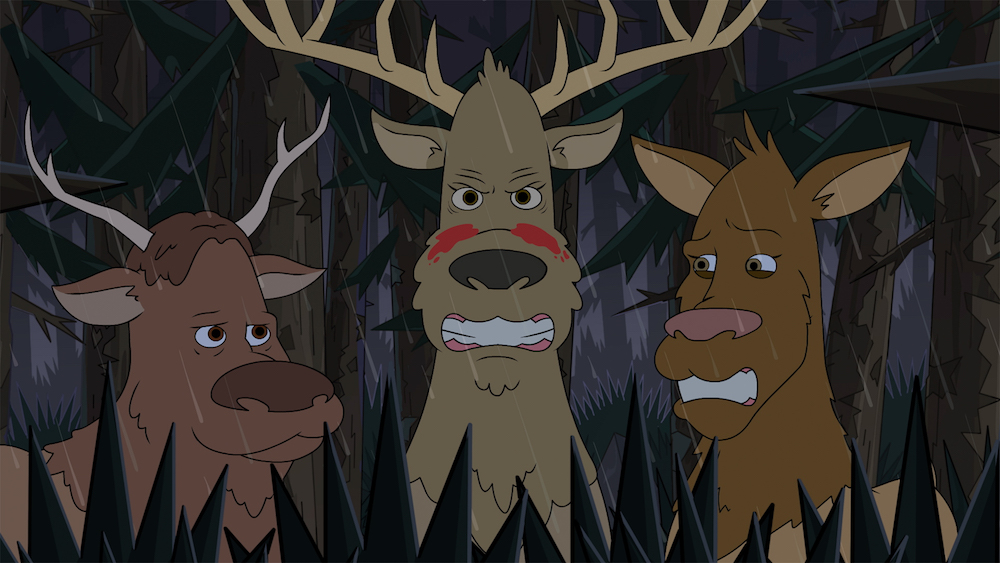 Herein lies one of the more enticing elements of “Human Discoveries.” So much of what we do today is based on behavior patterns that have been engrained in our ancestors for eons. Asking, “What would you say or do if those patterns didn’t exist?” offers a unique canvas for creativity. For instance, when Gary decides he wants to be in a relationship with Jane, he doesn’t have the convenience of words like “relationship,” “romance,” or “dating.” Those concepts haven’t been put into words yet, and watching him rehearse what he wants to say to a crude cave drawing of Jane is pretty funny! “How do I explain to Jane something that doesn’t exist yet?” Gary says, before trying out, “Hey Jane, I want to be friends… with sex!”

Gary instantly rejects this tactic as too gross and misrepresentative, but you get the conundrum. Navigating these kind of relationship questions turn into a prominent theme of the show, as Gary and Jane lead the A-plots of each episode by moving from new stage to new stage, new challenge to new challenge. This works OK, but the familiarity of their arc also makes the show itself a little too familiar. It’d be nice to see them dream a little bigger and explore their options more — instead of knowing Gary and Anna will stumble into monogamy, why not let them try out other ways to be a couple and explore the new feelings that come along with those choices? Maybe Anna likes not being exclusive? Maybe Gary falls in and out of love every time he has sex? Maybe they’re happiest living not with one partner, but a whole cave of co-mingling cave-people?

Instead, the more predictable patterns persist, including other parts of the comedy, as well. When Gary accidentally discovers fire, you know it’s only a matter of time before a) someone burns themselves, b) someone starts a forest fire, c) someone breathes in too much smoke. These kind of inevitability can be funny, playing off what the viewer knows and the characters don’t, but there are a few too many build-ups to obvious destinations.

“Human Discoveries” is best when it gets weird. Remember those elk the macho humans hunt for sport? They consistently make up bizarro C-plots, like when a vengeful elk with bloodlust makes it her mission to turn the tables on their oppressors and kill as many humans as possible. Another episode watches as they witness their fellow elks’ corpses be defiled by curious, oblivious humans. It helps that Lisa Kudrow provides the voice of a recurring antlered friend, but these strange forays into untrodden territory are much more compelling than a lot of the human stuff.

The Facebook original may not offer any mind-blowing social commentary, but its cast is really good — highlighted by Kudrow, Scheer, Bell, Ed Begley Jr., and Sam Richardson — and the comedy is consistent enough perhaps it can blossom into more original areas as it progresses. There’s no reason to rush out and see it, but it’s a more entertaining offering than Facebook’s other scripted originals, like “Queen America” and “Sacred Lies.” Where does “Human Discoveries” fall on the Facebook scale beyond those actively bad programs? Not as valuable as any mini-pig video, but a superior advancement from non-animal memes.