“I’ll be pretty much quarantined in my room until game time on Sunday,” CBS’ Jim Nantz says

As Tampa prepares to host its first Super Bowl in 12 years, it would be understatement of the century to say that Sunday’s 55th edition of the NFL’s title game will be vastly different from the 54 matchups that preceded it.

When the Kansas City Chiefs attempt to defend their title against the hometown Tampa Bay Buccaneers, it will come in front of a far-less-than-capacity crowd of 22,000 masked-up fans, 7,500 of which will be vaccinated health-care workers. The NFL and CBS, which is broadcasting this year’s big game, have had to rethink almost every part of what is annually a weeklong celebration leading up to the biggest TV event of the year.

“It’s going to be unlike any Super Bowl that I’ve been to,” CBS Sports chairman Sean McManus told media during a virtual press conference with the rest of CBS’ broadcast team. “The Super Bowl usually is a time where we have a lot of meetings with our NFL partners, with owners. We go to a lot of functions like the the big Friday night party that the commissioner holds every year, where you pretty much see everybody involved in television, sports and NFL football.”

The NFL is the latest sports league that’s had to adapt its marquee event to the reality of the pandemic. The NBA and NHL held their respective championships inside attendance-free bubble environments. Major League Baseball’s own drastically shortened 2020 season finished in front of very little attendance in a neutral stadium of its own.

Most of the events that take place during Super Bowl week, including the big Opening Night event that kicks off the festivities on Monday, will happen virtually this year. The Chiefs won’t even arrive in Tampa until the day before the game. Around the city of Tampa, the Super Bowl Experience, a fan-friendly exhibit open that is among the most highly attended attractions, is operating on a reservation system (it’s already sold out) and will require masks and social-distancing protocols.

For play-by-play broadcaster Jim Nantz, the Super Bowl will be an extension of what he’s been doing all season long. “Normally, you would be in by the previous Sunday night or Monday morning at the latest and you go through all the interviews and go to the press days,” he said. Since the Buccaneers are able to stay in their homes and the Chiefs won’t be arriving until Saturday, “there’s not a need for us to be just hanging out in a room in Florida,” he added. 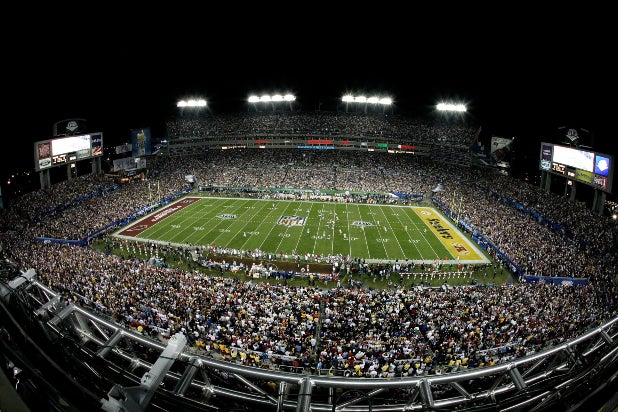 Nantz will not arrive until Thursday and the only other time he said he’ll go to Raymond James Stadium is for a brief walk-through of the trophy presentation on Friday. “I’ll be pretty much quarantined in my room until game time on Sunday.” Though Nantz understands the need for the strict protocols due to the virus, he laments that this Super Bowl (and this season in general) has something missing.

“There’s nothing social about it. I missed it big time,” he said. “It’s not OK with me, I’ll be honest.”

If there is one thing going for this year’s weird Super Bowl, the matchup could not be more TV-friendly. On one side, the Chiefs and star quarterback Patrick Mahomes are attempting to win back-to-back titles against Tampa QB Tom Brady, who is going for his seventh win (in his first year since his divorce from the New England Patriots and Bill Belichick). It’s the first time any team has played the Super Bowl in its home stadium, though that significance will be wiped out somewhat by the sparse attendance.

McManus admitted that the tone of the broadcast will be shaped by the current reality that the country is still very much in the throes of a pandemic that has killed more than 400,000 Americans. “The existence of the health care workers, the overhang of the pandemic, it’s all gonna make our tone a little bit different,” he said. “We’re not going to be somber, and we’re not going to be depressing, but I think we’re going to put everything in perspective.”

CBS’ sideline reporter Tracey Wolfson has had her whole job change all year since she’s not allowed to be up close and personal with the players. All year long, she and other sideline reporters have had to station themselves in the first few empty rows of stadiums rather than directly behind the team benches.

“It’s gonna be interesting standing there, looking around with a stadium that’s filled with 22,000 fans,” she said. “I don’t know if you’re going to get that huge pomp and circumstance that you’re normally used to.”

When the Super Bowl ends, the NFL will begin its long off-season with the hopes that by September, the U.S. will have reached, or at least have started to reach, some kind of normality. Hollywood will share that same feeling, and not just because the entertainment industry has found it really difficult to keep its cameras rolling during the pandemic.

It’s also the site of next year’s Super Bowl.