Home » TV & Movies » House of the Dragon spoilers: Does Rhaenyra have children? House of the Dragon spoilers: Does Rhaenyra have children?

King Viserys Targaryen (played by Paddy Considine) was becoming more infuriated by his daughter and heir Rhaenyra (Milly Alcock) in the most recent episode of House of the Dragon, telling her she needed a husband and to begin her own family to strengthen her line.

However, Rhaenyra was adamant she was just fine and had no plans to marry or have any children – possibly because of her fear of death during childbirth like her mother Aemma Arryn (Sian Brooke).

WARNING: This article contains major future spoilers from House of the Dragon and Fire and Blood

Does Rhaenyra have children?

However, fans are curious to know more about Rhaeyra’s future and whether she will eventually give in to the call of duty by getting married and having her own children.

Fire and Blood by George R.R. Martin serves as the basis for Fire and Blood, and so there is much about Rhaenyra’s life and future.

The Realm’s Delight did go on to marry Laenor Velaryon (Theo Nate) in a politically astute move, which brought the family back into the fold after Viserys snubbed their daughter previously.

In the book, Rhaenyra was opposed to the union which was settled upon without her input with the princess telling her father: “My half-brothers would be more to his taste.” 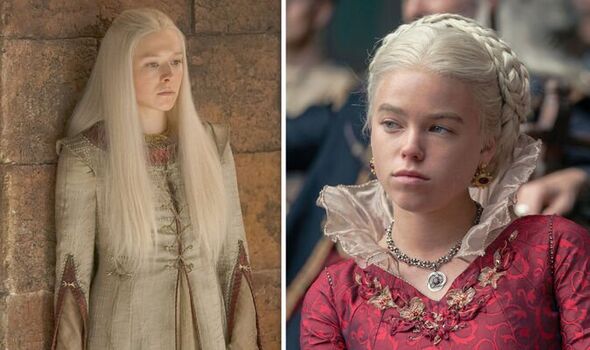 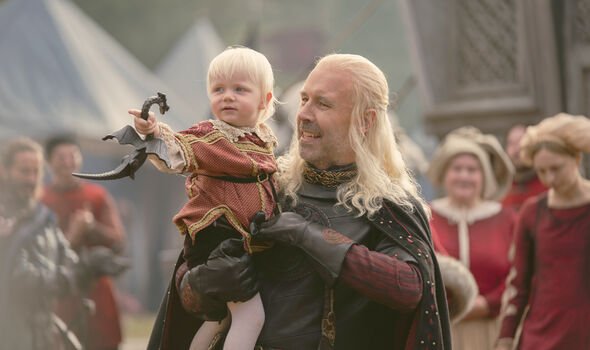 Rhaenyra was 17 when she wed Laenor who was 20 at the time with many praising the pair for making a handsome couple.

The young couple spent much time apart after their nuptials and Fire Blood states after a tourney celebrating their marriage: “Ser Laenor returned to Driftmark thereafter, leaving many to wonder if his marriage had ever been consummated.”

Additionally in the books, it’s suggested Rhaenrya would sleep with her lover See Harwin Strong (Ryan Corr) while Laenor was with his male lover Qarl Correy. 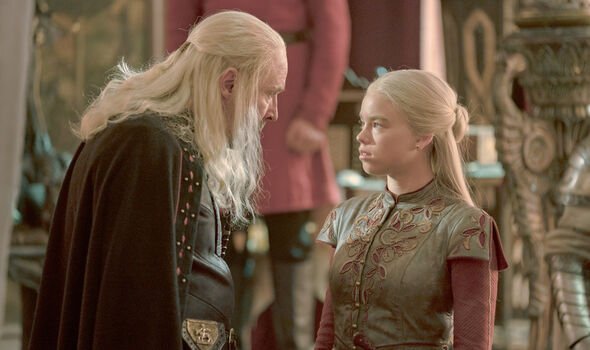 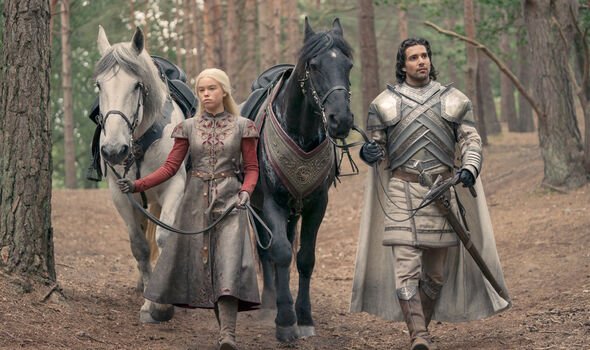 Their first Jacaerys was born in 114 After Conquest (AC) but looked nothing like his father with dark hair and a pug nose rather than the Valyrian features of the Velaryons.

Lucerys was born the following year and the year after this came their final son Joffrey.

In fact, all of Rhaenyra’s sons with Laenor had dark hair with rumours she had fathered her offspring with Ser Harwin.

There was much whispering within the realm about the real father of Rhaenyra’s children and to put an end to the gossip, Viserys put a dragon egg next to each cradle with each son gaining a dragon later on.

This wouldn’t be the end of Rhaenyra’s children though, she would go on to have more after her marriage to Laenor ended following his death.

Rhaenyra went on to secretly marry her uncle Prince Daemon (Matt Smith) and in 120AC she gave birth to a baby boy, whom she called Aegon.

The couple went on to have a further two children – Viserys born in 122AC and a daughter named Viseyna who was tragically stillborn in 129AC.

Rhaenyra apparently went into labour with Visenya after hearing her father Viserys had died and Alicent Hightower’s (Emily Carey) son Aegon was installed on the throne.

In total, Rhaenrya had six children but one of them didn’t survive and she blamed her enemies for Visenya’s death.

Rhaenyra’s children would go on to have an important role in the line of succession with both her sons with Daemon making it onto the Iron Throne.

George, Charlotte and Louis new school will be approved by Meghan
Recent Posts