In episode four of Game of Thrones season eight, Daenerys Targaryen (played by Emilia Clarke) flew with her dragons towards King’s Landing to destroy some of Cersei Lannister’s (Lena Headey) forces.

However, she was in for a shock when her own forces were attacked by Euron Greyjoy (Pilou Asbaek) who had his Scorpion weapon to take down the dragons.

Daenerys was devastated when one of the Scorpion bolt struck Rhaegal in his wing and his neck before he fell into the sea below.

Fans were horrified when blood spurted out of the dragons mouth and wing as he spiralled through the sky. Now, it has been revealed there was a very important reason why Rhaegal’s death had to be so visceral.

VFX Supervisor Martin Hill explained: “Originally the final death was meant to be three separate shots, but when we first reviewed the first animation with [visual effects supervisor] Stefen Fangmeier, we thought we could give it a greater impact by combining them into one sweeping, graceful, orbiting and line-crossing camera move around the dragon to almost Dany’s POV where we watch him dive into the water.

“This meant we flew past Rhaegal’s head, right at the moment he gives his dying breath and added a large fluid simulation for the blood spraying out.”

Mark added it was important viewers knew this was the end for Rhaegal and not long after Daenerys had lost close friend and confidante Ser Jorah Mormont (Iain Glenn).

The Mother of Dragons was already in mourning and to suffer another devastating loss was important with regards to her storyline.

“We needed to make a point of difference to Drogon being hit in season seven,” Mark told Digital Spy.

“Making sure it was clear Rhaegal was gone, so gave that bolt through his neck a lot of impact on its exit wound, and made him go limp and fold up as he crashes into water.” 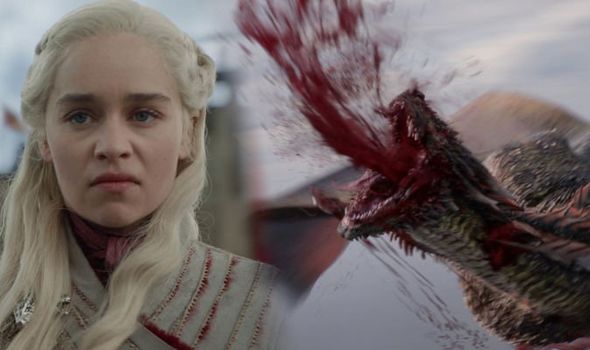 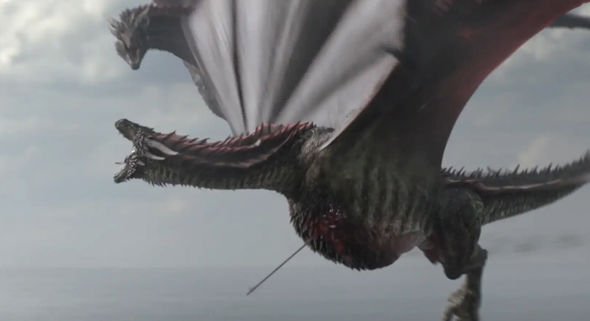 That wasn’t the only devastating moment as it was later revealed Daenerys’ friend Missandei (Nathalie Emmanuel) had be taken captive.

She was beheaded in front of the Khaleesi at the end of the episode, which ignited her rage and ultimately led to her burning King’s Landing to the ground.

Meanwhile, it was recently theorised Arya Stark (Maisie Williams) was warned about Daenerys’ attack on King’s Landing years in advance.

After the city was reduced to ash and rubble, Arya told older brother Jon Snow (Kit Harington), he had to do something to stop his Queen.

However, she should have warned him about her plan much earlier, as Reddit user AmElros noted she learned of King’s Landing destruction in A Storm of Swords. 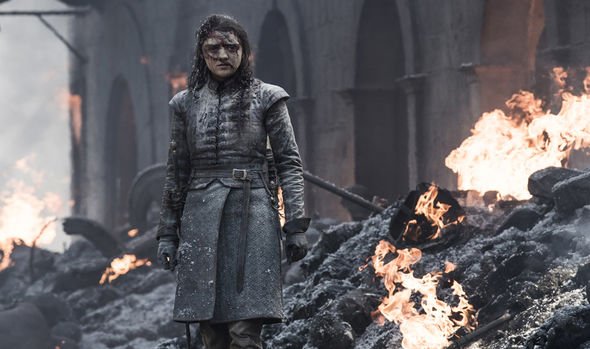 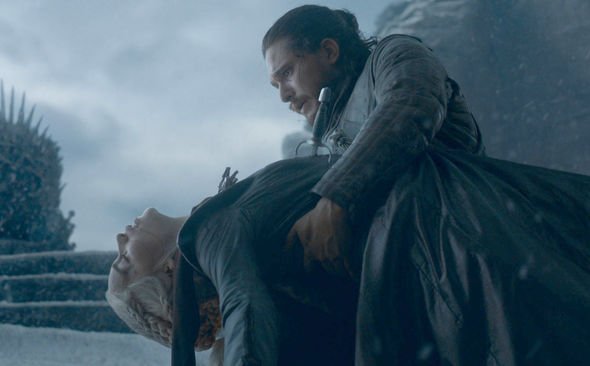 In a chapter about the young Stark, the Brotherhood Without Banners sit on the High Heart with Thoros, Lem and Beric sitting with the Dwarf Witch.

It reads: “I dreamt a wolf howling in the rain, but no one heard his grief,” the dwarf woman was saying.

“I dreamt such a clangor I thought my head might burst, drums and horns and pipes and screams, but the saddest sound was the little bells. I dreamt of a maid at a feast with purple serpents in her hair, venom dripping from their fangs.

“And later I dreamt that maid again, slaying a savage giant in a castle built of snow.’ She turned her head sharply and smiled through the gloom, right at Arya. ‘You cannot hide from me, child. Come closer, no.’”

Could the “battle with the sad little bells” have been a warning about Daenerys’ attack to take down Cersei and a subtle hint to Arya to be careful?

Dick and Angel in new show Escape to the Chateau: Living the Dream