El Moussa’s own flipping series, “Tarek’s Flip Side,” is set to debut on Aug. 1 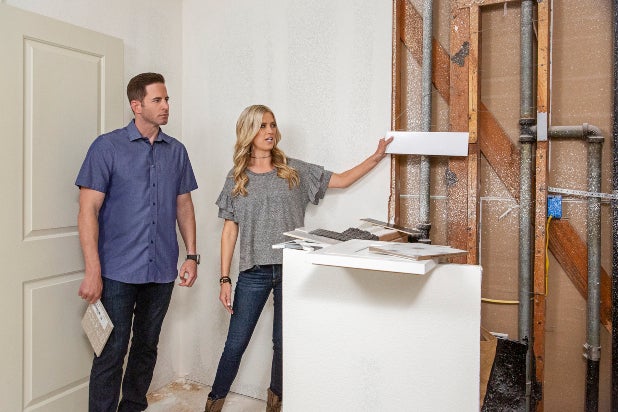 As seen on Flip or Flop, real estate partners, Christina Anstead and Tarek El Moussa, pick out tiles and cabinet color for the master bathroom of this Yorba Linda, CA home which they are hoping to flip for a profit.

Divorced couple Tarek El Moussa and Christina Anstead are returning to HGTV with a new season of “Flip or Flop.”

The new season will return on Thursday, Aug. 1 at 9 p.m. ET/PT. Additionally, the Discovery-owned cable channel says El Moussa’s own digital house-flipping series, “Tarek’s Flip Side,” will also debut on Aug. 1 on the HGTV app, HGTV.com, on demand across all platforms, HGTV Facebook and HGTV’s YouTube channel.

The couple got divorced early last year and Christina got re-married to Ant Anstead six months ago. Anstead also starred in her own HGTV spinoff, “Christina on the Coast.” The network has been in production on season 8 for almost a year, with it set to wrap up in July.

“Christina and I are in a really good place right now,” El Moussa said. “We’ve worked hard to keep our business strong, but our kids will always be our #1 priority. It’s important they know we respect each other and that we only want the best for them.”

The new season of “Flip or Flop” will provide a glimpse of Christina and Tarek’s new family dynamic when Christina — who is now remarried, raising a blended family of four and expecting a baby boy later this year — drops off kids Taylor, 8, and Brayden, 3, at Tarek’s house.

“I feel like Tarek and I have started a brand-new chapter,” Anstead said. “We may not always agree on kitchen backsplashes or floor plans, but we’re always on the same page when it comes to our kids. We’ve learned to put our differences aside, so we can give Taylor and Brayden the best and happiest life possible.”