Home » ‘Evil’ Review: A Wilder, More Stuffed Season 2 Is Still in Touch with Its Devilish Side

‘Evil’ Review: A Wilder, More Stuffed Season 2 Is Still in Touch with Its Devilish Side

Believing in anything can be messy, so it only makes sense that “Evil” would be, too. The show, which debuts its Season 2 this weekend on Paramount+, fashioned itself as something of a belief kaleidoscope when its initial season aired on CBS proper in late 2019 and early 2020.

The show’s initial hook came from the pervasive-yet-cordial disagreements between Catholic Church assessor David Acosta (Mike Colter) and psychologist Kristen Bouchard (Katja Herbers), each tasked with working together to evaluate claims of otherworldly forces in the lives of people in and around New York. Each inexplicable phenomenon that they and universal skeptic Ben Shakir (Aasif Mandvi) encountered over the course of that first season was met with a range of theories stemming from steadfast doctrine adherence (the presence of malignant spirits bent on manipulating humans’ better instincts) to simple scientific explanation (usually an abundance of a household chemical only intended to be used in small amounts).

It would be easy to claim that Season 2 delivers more of the same, but that would undersell the extent to which these new episodes have a far greater dose of “more” than “the same.” After already building to something of a unified theory that tied most of the mysterious Season 1 occurrences together, “Evil” keeps some of that framework and spends the early going of this new season by adding rather than refining. Here be invocations in archaic languages, accidental amputations, and clear-headed confessions of felonies punishable by life in prison. 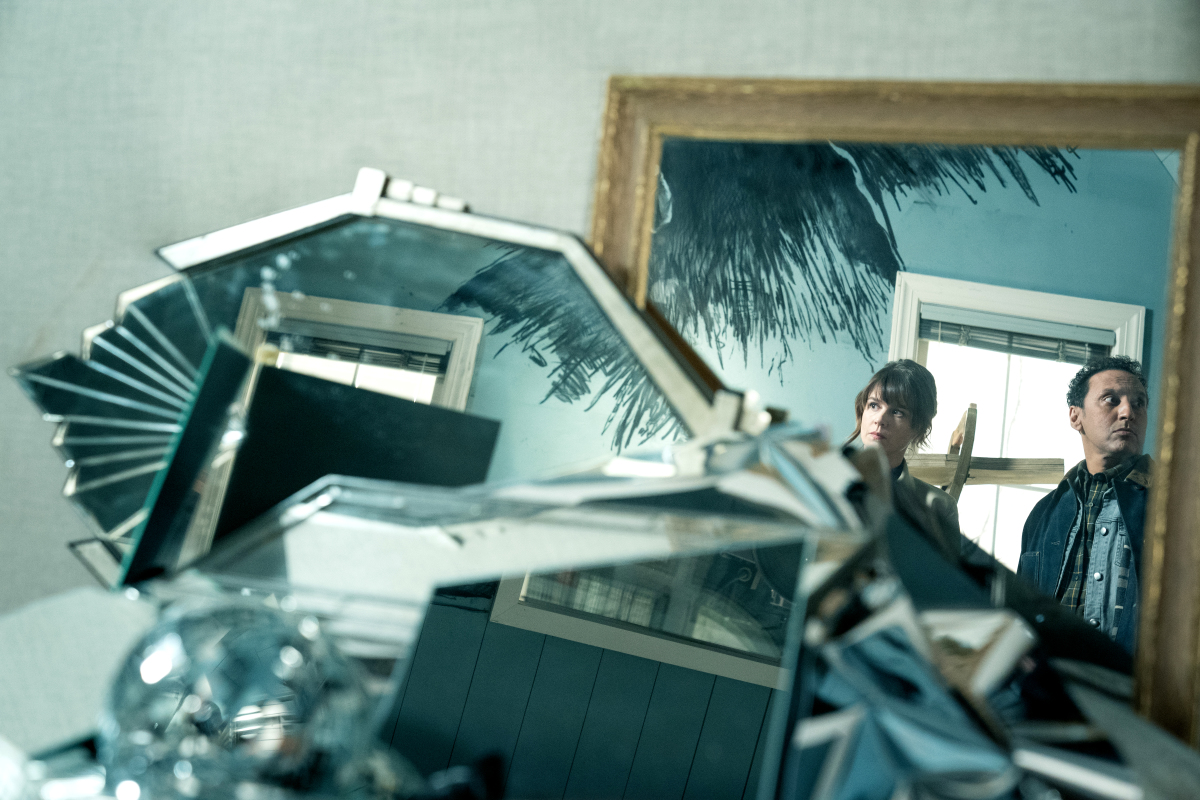 “Evil” is still a show concerned with contradictions, but it’s not the simpler “science vs. faith” tussle that may have been the hook at the beginning. It’s not just that Kristen and Ben and David have had their respective touches with the unexplained. (As of Season 2, all three have new reasons to question what they’re seeing with their own eyes.) There’s a certain threshold that’s been passed, a blurring between what’s meant to be real and what’s intended as mere perception. As frustrating as it can be at points from an episodic storytelling standpoint, there’s a certain method to that murkiness that puts the viewer on equal footing with the main trio whose perceptions of what to believe has been shifted by visions of avenging archangels, scythe-wielding devils, and disco dance moves from the unlikeliest of sources.

The challenge with this show is always going to be the balance between the big-swing maximalism of its supernatural elements and the quieter character moments it peppers throughout. When those two manage to sync up, like Kristen navigating the complicated realities of her marriage or David’s not-exactly-sanctioned efforts at communing with the sublime, it’s a thrill to have a show that can deftly handle both at the same time. The group dynamics, whether between our three main investigators or Kristen’s four daughters, grow stronger with each passing scene spent together. There’s a feeling of everyone becoming more comfortable around each other, even when the powers swirling around them are more of an enigma than they’ve ever been.

After settling into a groove at the end of last season, Season 2 takes a different enough tack that these opposing forces sometimes leave the show somewhat disjointed. “Evil” has plenty of characters that the series’ writers understandably are hesitant to give up, notably Leland Townsend (Michael Emerson). Fiendish and theatrical in hyper-controlled ways that seemingly only Emerson can tap into, he’s also one of the show’s convenient conduits for outlining what’s at stake. (“It’s so comforting to pray to power instead of weakness,” Leland says when describing his consorts with the Devil.)

Keeping him around is more a blessing than a curse, but the contortions that “Evil” has to make to keep him involved sometimes points to the show having the occasional hit-or-miss streak. If there’s any cause for concern, it’s that this season provides even more chances for “Evil” to go astray. After hinting at the end of last season that a fertility clinic could hold the key to explaining everything, “Evil” keeps adding on cases. So far the show has resisted using multiple episodes to really consider a single instance. If it continues at this pace, there’s a potential for burnout awfully quick. 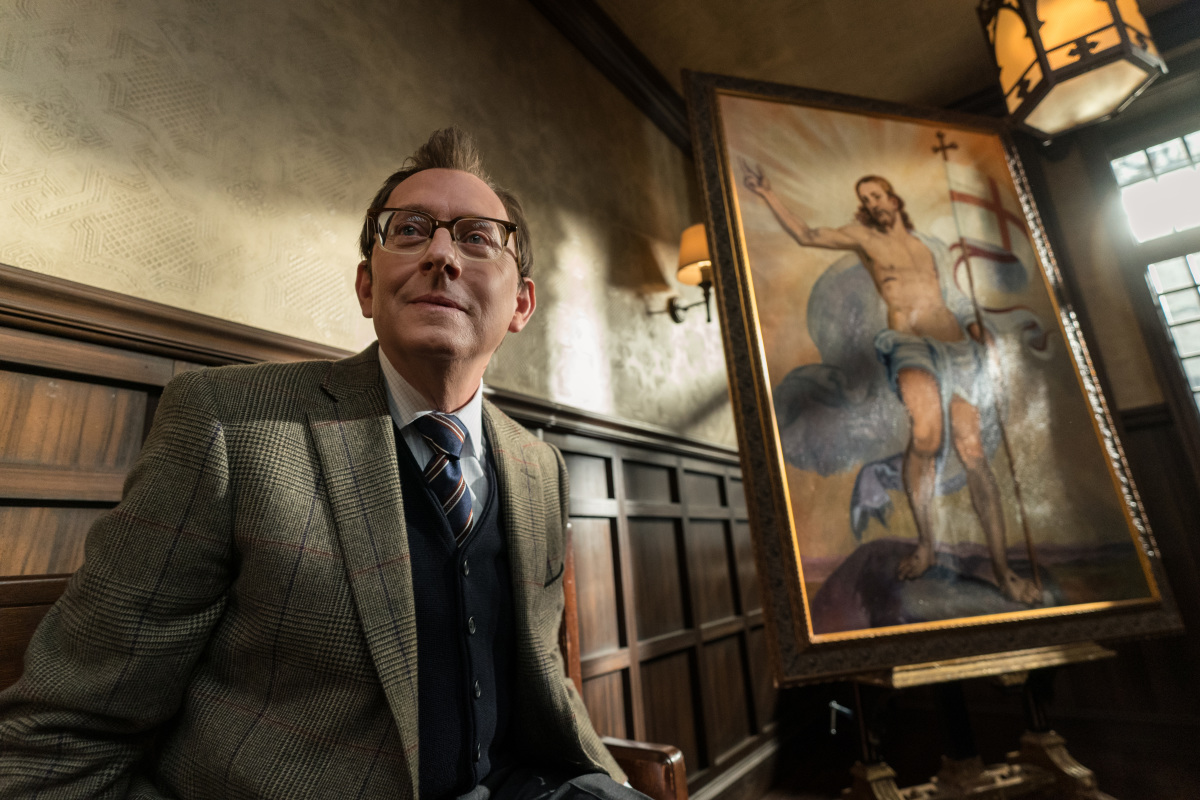 Even if that comes, there’s still plenty of value in the way the show defies treating individual faith traditions as monoliths. It’s an antidote to the idea that invoking any particular deity (or a belief in the absence of one) should be an automatic justification for any course of action. Many of the show’s arguments bubble up from a theological starting point, but the “Evil” big tent approach draws in discussions of power, patriarchy, bigotry, the nature of righteousness, and the prevalence of modern surveillance tactics. Whether there’s enough real estate to yield any meaningful conversations or if those moments are blips on the way to tying up all the episode’s loose ends by the time 41 minutes are over remain in the eye of the beholder. (Of the first four episodes of Season 2, only the fourth is written by series creators and executive producers Robert & Michelle King. It’s also the one that feels closest to a full “The Good Fight” Season 4 crossover, though the two shows’ DNA are still recognizably linked.)

On some level, saluting the show’s elastic episode-to-episode approach means accepting that there’s a part of “Evil” that will always feel a tad elusive. The show has room for dissections of cognitive behavior, considerations of the ethics of certain Church practices, dalliances with prosthetic-covered dream demons, and a handful of psychedelics-induced hallucinations for good measure. It’s a combination that’s baffling in the best kind of way.

The deeper that “Evil” gets into its mythology, the more it feels like a magician offering an inside look at how they do their tricks. For those who enjoy “Evil” for its web of sigils and exorcisms, Season 2 still has plenty to offer. Peel back the layers of CGI apparitions and simple effects flair (each episode begins with an intricate pop-up book motif) and you still have the show’s simple, tiny unsettling touches: a shriek coming from a garbled voice recording or a strange noise happening just out of sight or a mirror staring back with a sinister grin. They’re all threads in a bizarre tapestry that maybe doesn’t always make sense when looking at it up close. But step back for a full view, and there’s nothing else like it on TV.