Emmerdale: Cain says Mack has made ‘a mistake’

Mackenzie Boyd (played by Lawrence Robb) has caused nothing but trouble since arriving in Emmerdale. After being thrown out by Kim Tate (Claire King) and Jamie Tate (Alexander Lincoln), he patched up his relationship with Moira Barton (Natalie J. Robb) and the pair began to plot Home Farm’s downfall. However, Mackenzie’s plan will backfire and will result in the vet attempting to burn down Butlers Farm. The extent of the arson is yet to be revealed by the popular ITV soap, but Moira’s business hasn’t been doing very well, despite Rhona Goskirk’s (Zoe Henry) cash injection. With her barn burnt to the ground, will Moira have to admit her business has failed and move out, thus making way for a new family?

In upcoming scenes, Mackenzie sets his sights on getting revenge on Kim and Jamie for turning against him.

At Home Farm, the troublesome newcomer overhears the pair discussing a potential client and hatches a plan to show them he is not someone they want to mess with.

Mackenzie organises an imposter client to meet up with Jamie and the gullible village vet falls for it.

Jamie offers to show ‘fake’ Greg the company accounts and Mackenzie can’t believe how well his plan is working out. 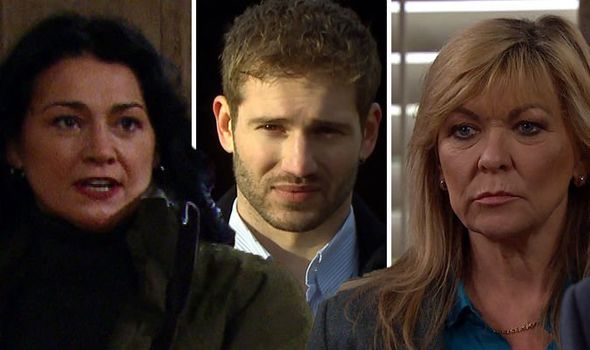 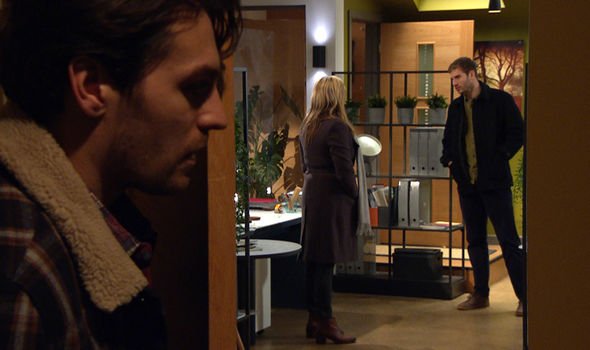 But, it isn’t long before Jamie and Kim realise what’s happened and the Tate matriarch is furious with her son for being so naive.

Meanwhile, Mackenzie and Moira celebrate their achievement, unaware of Jamie plotting the next move.

Emmerdale fans will see Jamie head over to Butlers Farm and throw petrol all over the floor and hay bales, but after watching on for some time, an amused Mackenzie points out the liquid in the can is in fact water.

Humiliated, Jamie heads off and bumps into Dawn Taylor (Olivia Bromley) who suggests he leave his former ally alone. 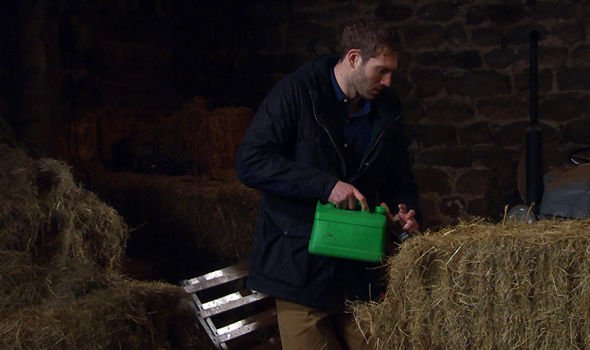 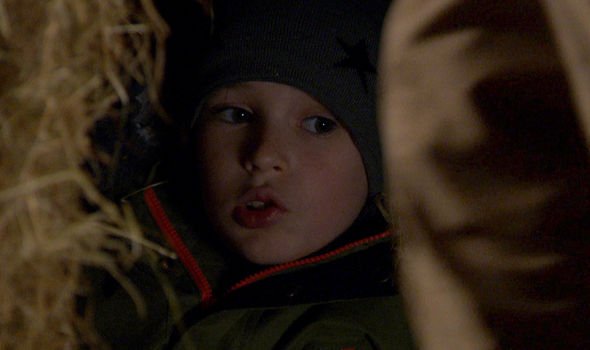 However, her words have the opposite effect and the vet is spurred on to bring down Butlers Farm for good.

Jamie spots a real petrol canister and douses one of Moira’s barns with the flammable liquid but what he doesn’t realise is there is someone inside the building.

Moira and Cain Dingle’s (Jeff Hordley) son Kyle has been playing hide and seek in the barn that afternoon, and now his life is in danger when Jamie strikes the match.

Will Mackenzie realise what Jamie is up to and stop him in time? Or will Kyle pay the ultimate price for the family feud?

Speaking to Express.co.uk and other press, Lawrence revealed: “Mackenzie’s been working at the farm with Moira and he’s been playing hide and seek with Kyle.

“He thinks Jamie is going to burn the barn down and he says ‘Kylie is in here, you can’t do that, you’re gonna kill Kyle’ and then it transpires Kylie comes out and all this fine.

“But he then tells Jamie, ‘I cannot believe you did this’, and tells Cain which starts all kind of problems from there.”

It is highly unlikely that Mackenzie is not going to take action, least of all running to Moira and telling her about Jamie’s revenge plan.

As for Kyle, Lawrence continued: “I don’t think that Mack ever thought that Jamie had it in him to kill a kid.

“But, as I’ve said before, he knows that Jamie isn’t the sharpest tool in the box, and he tends to do things quite impulsively without really thinking it through.

“He knows that Jamie definitely has it in him to set the barn alight because Mack poked the bear enough to make him do that.

“And there’s elements of that entire altercation that is my fault I mean most of it is because I set Jamie up.”

Lawrence confirmed Kyle will be rescued from the barn but what about the structure itself?

With the village vet so determined to prove to his mother he is a true Tate, a dramatic scene could unfold.

In true soap style, Kyle could be rescued just in the nick of time as the barn goes up in flames and Moira watches on, clutching her son as her business is destroyed.