This Friday, Netflix invites you to leave your troubles behind and travel abroad with Emily in Paris, its new comedy from Sex and the City and Younger creator Darren Star.

The series stars Lily Collins (The Last Tycoon) as the titular Emily, a Chicago marketing executive who is sent by her company to liaison with their recently acquired boutique Paris firm. Emily’s new adventure — which was filmed on location in the French capital and nearby countryside — is filled with wondrous sights, food, fashion and men (more on one fella below), making for a visual feast. But Emily’s life isn’t all croissants and eye candy: Her new gig and her Parisian boss Sylvie (Philippine Leroy-Beaulieu) prove to be more challenging than expected.

Below, Star talks about the show’s escapist appeal, its shared themes with Sex and the City and Younger, and the attraction between Emily and her handsome neighbor.

TVLINE | The setting of the show is so beautiful, and it adds so much to the series. Did filming in Paris also open up doors in terms of casting?
Absolutely. Most of the cast is French. Well, a good part of the cast is French, except for Lily [Collins] and Ashley [Park]. The intention was always to film in Paris. I only wanted to do this show if we were going to actually film in Paris, because I think Paris is certainly a character in the series and, absolutely, it opened up a world of French actors. Philippine Leroy-Beaulieu is someone I knew from Call My Agent! or 10 Percent, but a lot of them, I didn’t know. There’s just so much talent over there, a world of actors that we’re just unfamiliar with here in the states. 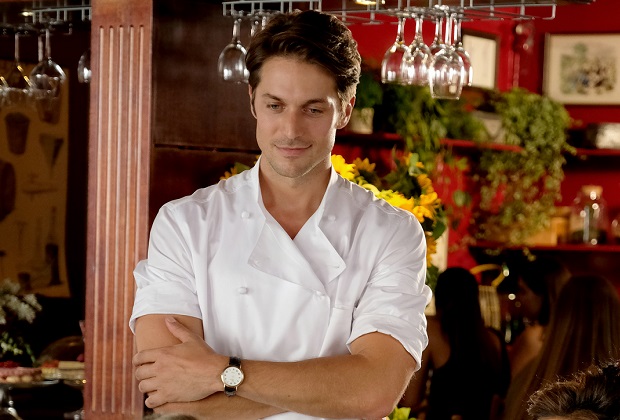 TVLINE | I spoke to Lucas Bravo earlier, and I have a feeling that you’re going to be credited with breaking him out to American audiences.
I hope so. It’s certainly well deserved. He’s just a terrifically charming guy, and he’s wonderful in the show. It’s fun to sort of discover new people like that.

TVLINE | Can you talk about the dynamic between his character Gabriel and Emily, and what draws them to each other?
I think he’s really taken by her. There’s something about her individualism and her Americanism that he connects with. He’s somebody that, definitely, also wants to be his own man and blaze his own trail at everything, and he just connects to her spirit, her spunk and her energy.

TVLINE | And what does she see in him — besides the obvious?
Well, he answers the door, and she sees a charming, beautiful French man… Certainly a friendly French neighbor, first of all, who is open to just helping her out. First and foremost, when I think about that character and who he is in her life, that’s sort of his first mission, to help her navigate a little bit in this foreign world. She really doesn’t speak French. He helps her figure things out a little bit. There’s an attraction.

TVLINE | People know you from your work on Younger and Sex and the City. For fans of those shows, what do you think about Emily in Paris is going to appeal to them?
All those shows take the viewer into a different world. Sex and the City and Younger are both set in New York. They’re very different shows, but they both sort of take the audience into a different world and a world where the friendships are really important and, certainly, friendships between women. They play out in very different ways, [but] I think that sense of making a family of your friends is something that is thematic to all these shows. 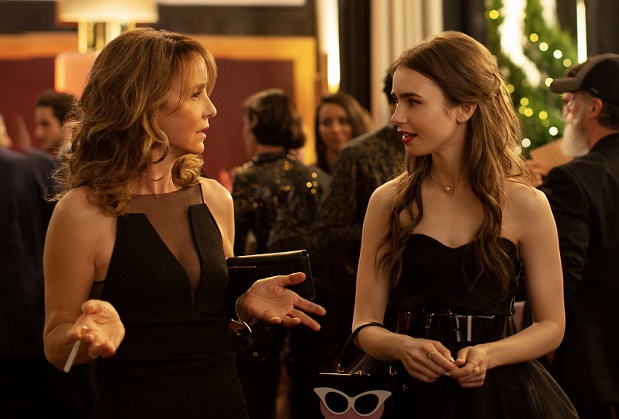 TVLINE | Do you see any similarity between Emily and Sylvie, and Liza and Diana on Younger?
I think we can, because, in some ways, they’re both sort of like slightly remote, scary bosses. But when you drill down, they’re very different characters. On the surface, it’s easy to say, “Oh, they’re very similar,” and superficially, they are, but the dynamics are very different. Sylvie is a way more mysterious character than Diana, who wears all of her insecurities on her sleeve. Sylvie is still a mystery by the end of the first season. It’s a really interesting, fun character to explore. She’s complicated and foreign. Diana is, really, not a foreign character, but Sylvie really is a foreign character. As a writer, I’m still trying to understand who Sylvie is… We, really, can be very revealing as Americans about who we are, and Sylvie, as a French woman, especially with Emily, is not very revealing. Their relationship is about two cultures meeting and clashing… [but] Sylvie really comes to respect and admire Emily by the end of the first season.