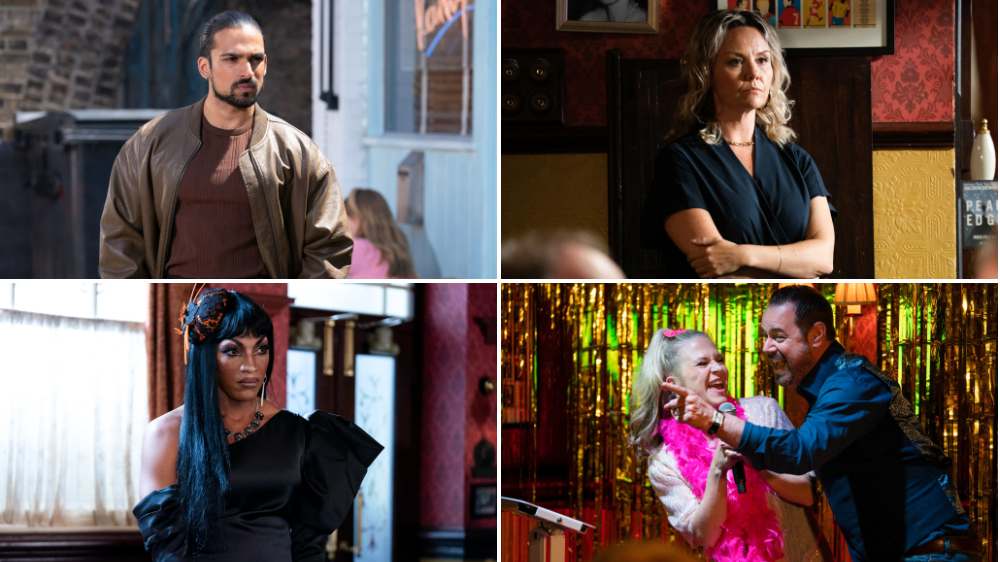 Revenge is on the menu in EastEnders, as Sam Mitchell (Kim Medcalf) leads Phil (Steve McFadden) to a bound up Lewis (Aidan O’Callaghan).

At Phil and Sam’s mercy, Lewis looks set to pay for what he did to Ben (Max Bowden) – but in what sense. How far is Phil prepared to go?

Elsewhere, Janine Butcher (Charlie Brooks) has an uplifting surprise for Mick Carter (Danny Dyer) – but she soon has her joy turned to fury when Linda (Kellie Bright) steals his attention.

Ben is discharged from hospital but Phil can see there is a long road ahead. Looking for a solution to help his son heal, Phil meets with Keeble and asks if she can throw the book at Lewis. Sam tries to use Kat to get through to Phil but Kat refuses to get involved.

Giving up, Sam decides to leave Walford and asks Kat for the code to the safe to get her passport. Hesitant, Kat warns her not to take anything else. As Sam gets ready to go, Zack calls her to say he’s found Lewis. Zack and Sam drives off to get Lewis with the gun from the safe in her bag.

It’s an emotional day for the Baker/Taylor clan as Avery’s funeral gets underway. Mitch is dismayed when Tara arrives instead of Felix but at the wake, he realises Felix did this for Avery and apologises.

After Tara gives a touching tribute to Avery, Mitch, Felix and Finlay head outside and release the dove.

After the funeral, Jay fires Stuart because of the increasing amounts of complaints. Elsewhere, Howie tells Kim that his son Denzel has to stay with him for longer but Kim isn’t happy. After a talk with Felix, Kim tells Howie Denzel is welcome to stay.

As Mr Lister inspects the market, he overhears Ash and Honey talk about her being single. Ash can tell all is not well with Suki and asks Nina to check her. Ravi arrives and reminds Suki she needs to carry on as normal so she opens the Minute Mart.

Callum learns from Jay that Stuart has been fired but the conversation switches when Ben asks to meet with Callum.

After some encouragement from Jay, Callum and Ben talk but things don’t go well. Ben gets more bad news when Lola refuses to let him see Lexi until he gets professional help. Still reeling, Ben is shocked when Zack exposes Sam’s plan to him.

Phil is stunned when Sam reveals Lewis is tied-up in the boot of the car and she has Phil’s gun, it’s time to get revenge. Sam drives a reluctant Phil to a warehouse.

Mr Lister asks Lola for a mini makeover, secretly wanting to impress Honey. Sonia and Honey also get their hair done and Honey takes on a challenge – she has to say yes to everything.

Eve spots an awkward exchange between Honey and Billy and tells him to take her for a drink. Before Billy gets a chance, Mr Lister approaches Honey and invites her to lunch.

Sticking to her challenge, Honey agrees, much to Billy’s dismay. Finlay talks to Felix about wanting his own market stall. Meanwhile, Vi and Callum worry about Stuart. At the hospital, Stuart meets with his doctor to discuss his cancer diagnosis.

Ravi is annoyed to once again see the Minute Mart is closed and gives Suki a reality check about needing to act normal. In Walford East, the pair tell Suki’s children they have bought the restaurant together.

Worried about Stuart, Karen joins Callum and Vi in looking for him and they find him packing away all his belongings. Sensing all is not well, they ask him about his cancer diagnosis but Stuart tells them he has the all clear leaving them even more confused about his behaviour.

Karen understands where Stuart’s pain is coming from and alone, Stuart starts to open up and tells her he’s signed over all his parental rights to Rainie, she never wants to see Stuart again. Karen attempts to make him see this could be postnatal depression and encourages him to get help.

When Billy explains he wants to get back together with Honey, Sonia encourages him to interrupt and ask her out. Finlay gets there first however and seeing Honey’s pain, swoops in pretending to be her boyfriend leaving Billy mortified. Honey agrees to Finlay’s food stall.

To lighten the mood after Avery’s urn arrives, Karen reminds everyone of Bernie’s birthday tomorrow and enlists Felix and Finlay to help plan a party tonight. Honey informs Finlay that Mr Lister has not agreed to his food stall, so the brothers come up with a way to change Mr Lister’s mind.

After some convincing by Karen, Stuart agrees to see a GP and despite it clashing with Bernie’s party, Karen goes with him.

Elsewhere, Janine thwarts Linda’s karaoke plans for the night but when Mick arrives back from his trip, she realises Mick wants the entertainment.

Janine manages to bring the entertainment back but is seething when Mick joins Linda for some karaoke. While in Peggy’s, Shirley demands her cut of money from Sam otherwise she’ll tell Phil everything.