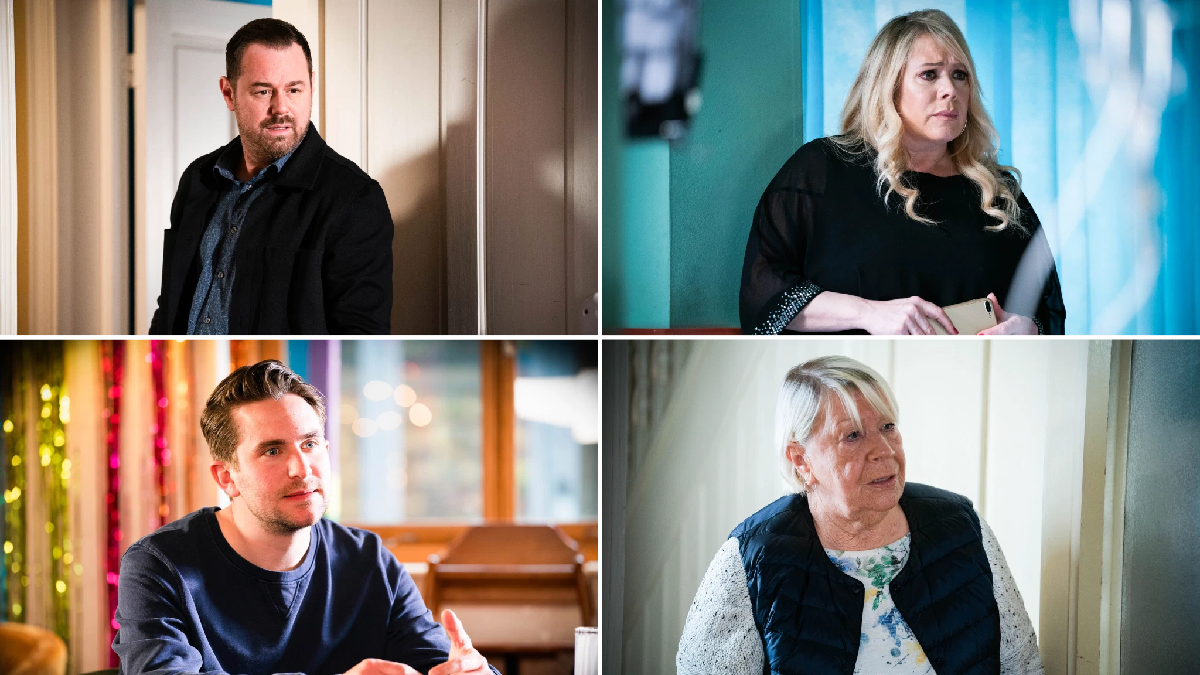 It’s another dramatic week in EastEnders as Mo Harris (Laila Morse) prepares to say goodbye – but can she bring herself to leave vulnerable Jean Slater (Gillian Wright) behind?

Elsewhere, after a collapse while exercising, Linda Carter (Kellie Bright) admits to Sharon Watts (Letitia Dean) that she is pregnant while Kat Slater (Jessie Wallace) is the victim of a nasty attack.

Nancy’s attitude is still causing problems for the Carter family, especially Linda. Frankie tries to play peacemaker in the hope of resolving some of the tensions.

Nancy reaches out to Linda by offering her a one-to-one personal training session at the gym as a peace offering. Linda pushes herself hard in a bid to conceal her pregnancy, but she ends up collapsing.

When Ben and Callum return from their honeymoon, they discover that they’ll have to sleep on a blow-up bed as Vi is still staying at Stuart’s. Ben thanks his dad for paying for the honeymoon, but Phil warns that it’s the last thing they’ll ever get from him.

Kheerat suggests to Suki that Ben might be able to help with Jags’s problem. Kheerat decides to keep Ben in the dark over his relationship with Sharon in order to stay in his good books.

Mo is reluctant to go away on a cruise with Fat Elvis because she’s worried about Jean.

Iqra supports Mila as she stands up for what she believes.

While waiting for an ambulance to arrive, Linda confides in Sharon about how she’s pregnant but Nancy doesn’t know. Linda is terrified when she can’t feel the baby moving.

Once at the hospital, Linda shares further details with Sharon, confirming that Mick is not the father. Linda is delighted when she’s reassured that the baby is fine.

Jean lies to Mo about why she has been behaving strangely. This is enough to convince Mo to go on the cruise after all, so Jean and Kat decide to organise a leaving party for her.

Ben agrees to help Kheerat make sure that Jags is protected in prison.

When a police car pulls up on the Square, Jean notices Mo acting suspiciously around their garage. Soon afterwards, Zack overhears Jean muttering about how she may not be around when Mo next returns to the Square.

Later, Jean is left concerned by something that Mo reveals to her before she leaves. After Mo’s departure, Zack asks Jean what she meant earlier. Jean isn’t willing to discuss this, but asks if Zack can help her with something else.

Phil snubs Callum by walking out of the café when he sees him there. Kat encourages Phil to make amends with Ben and make more of an effort to be part of Raymond’s life too.

Phil is also asked to come along to Bert and Ernie’s ‘Bring Your Dad’ day at school, as they don’t have anyone else.

Ben meets up with Callum, but senses that he’s not welcome as Callum is with his colleague Fitzy. In the end, he decides to leave them to it.

Later, Ben confides in Kheerat about problems in his relationship with Callum, admitting that he hates the idea of someone sneaking around behind his back. Kheerat feels guilty for hiding the truth about him and Sharon.

Phil and Kat attend the ‘Bring Your Dad’ day at the school. Jack is also there with Raymond.

Later, on the way home, Kat is mugged. Suki suggests that Phil will find a way to deal with the mugger, but Kat strongly defends him.

Kheerat opens up to Sharon about his connection to Chantelle.