Home » Dorinda Medley’s Net Worth: How Much Is The RHONY Star Really Worth? Dorinda Medley’s Net Worth: How Much Is The RHONY Star Really Worth?

The women of “The Real Housewives of New York” are swimming in dough, but they also know how to hustle. They’re New Yorkers, after all! While some of the women of the “Real Housewives” franchise earned their money through marriage (ahem, Sonja Morgan), others have worked hard for their cash (hello, Bethenny Frankel). Former cast member Dorinda Medley falls somewhere in the middle of those two categories, having started her own businesses long before she tied the knot to some wealthy men. And she continues to work on new projects, despite having left “RHONY” in 2020.

Before marrying her first husband, Dorinda founded and ran the DCL cashmere company in London, where she dressed high-profile clients like Princess Diana and Joan Collins, so she was very high up there on the socialite food chain. She divorced her husband in 2005 and moved back to New York, where she married Richard Medley, a financier and Washington D.C. powerbroker, per Bravo, and continued to run her company. Together, they also worked in fundraising alongside the likes of Bishop Desmond Tutu, Brad Pitt, Angelina Jolie, Secretary Madeline Albright, and President Bill and Secretary Hillary Clinton.

As fans know, Richard died in 2011. But given that he was also quite wealthy, it’s likely she was left with boatloads of money. Read on to find out just how much.

Dorinda Medley is worth millions 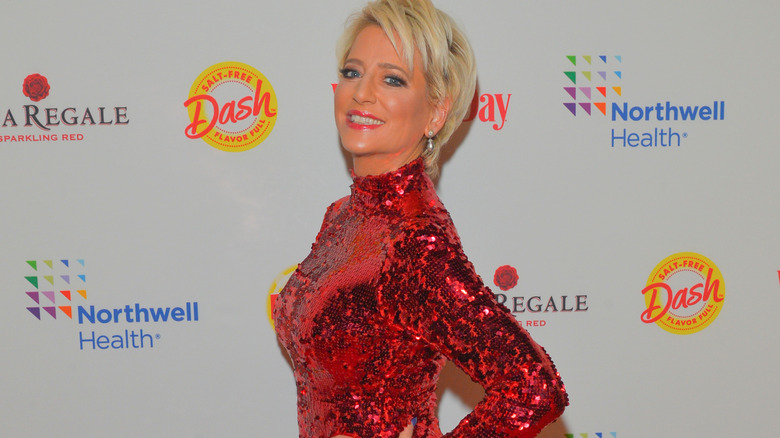 Per Celebrity Net Worth, Dorinda Medley is reportedly worth $20 million. That likely comes from her second marriage, the sale of her cashmere company, and some real estate investments, per Money Inc. Although she’s no longer on “The Real Housewives of New York,” she reportedly earned around $250,000 per season, according to Editor Choice. She’s probably missing that side income, but she still has a healthy nest egg.

Now that she’s not on the show and is still sitting on millions, Dorinda staying busy. She’s even creating a cookbook based on her Berkshires home cooking. She told Bravo in June 2020, “I’m thinking about publishing a great Blue Stone Manor cookbook. It’s a Betty Crocker kind of theme. Easy to do, at your fingertips, old school, you know?” She’s also written a book called “Make It Nice,” a reference to her iconic catchphrase from the show. Still, it seems she misses making the big bucks on Bravo with her girls. She told US Magazine in February 2021 that she misses the experience and being a “great Housewife.” Dorinda said, “You could love me. You can hate it. I am an authentic person. Like you’ve met me in real life. I’m not really different in real life than I am on the show. So, I’ve really grown to respect myself for that. Like me, hate me. I’m doing Dorinda Medley. And I always make it nice.”

That she did — and nothing is nicer than 20 mil in the bank.