As the country becomes increasingly, bitterly divided and people desperately want things to return to “normal,” the question of how much art can contribute to society crops up repeatedly. Once again, series creator Alena Smith reflects our present back to us with her radical retelling of Emily Dickinson’s life in “Dickinson,” where the third and final season finds the Civil War in full swing and everyone reconsidering their lives.

In the wake of her crash and burn at chasing fame, Emily (Hailee Steinfeld) pursues a new purpose for writing, putting pen to paper for the grander purpose of instilling hope in both her family and the troops. Steinfeld’s best work throughout the series has been in steering Emily through her own misguided reasons for creating, whether it’s a poem, more time with her lover Sue (Ella Hunt), or harmony within her family. But the cold realization for Emily now is that she can’t save everything. As seamstress and family friend Betty (Amanda Warren) points out, a poem can only do so much.

Betty’s words that a poem can’t change the world set Emily on a journey of questioning not just the world around her, but also her own role within it. Steinfeld still conveys the intensity of the creative process, but this final season forces Emily to ask herself if writing enough.

When Season 1 premiered on Apple TV+, the concept of Hailee Steinfeld leading the series as the famously reclusive poet felt like a shaky choice, especially as it initially seemed more like a return to her dramatic debut in period Western “True Grit.” But she has turned this character into the definitive Emily Dickinson portrayal, presenting a passionate and sensitive writer who desperately wanted to leave an impact even if it cost her a personal life.

Steinfeld has portrayed the poet going through a series of heady emotions, but this season sees Emily at her most emotional because there’s so much she cannot change. Her family is falling apart and her desire to write ends up butting heads with her desires for a personal life because there’s only so much time. Emily has always battled between her creative spirit and her teenage/early 20’s sense of selfishness, which comes to a head here as Sue is set to deliver a child and the war impinges upon everyone. Emily just wants to write a poem with significance, but obligations to her lover, her father, and others are pulling her in different directions. Steinfeld’s Emily has to keep a smile on her face as she tries to fix open veins with Band-Aids. 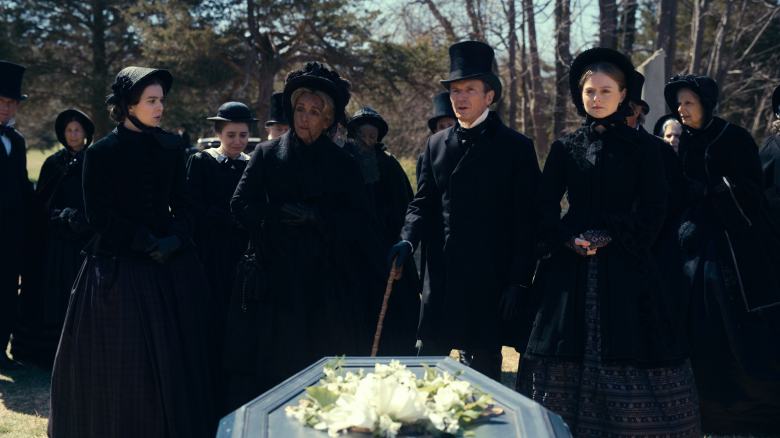 While the first two seasons centered Emily’s struggles, this final season expands the show into a true ensemble. Warren’s Betty is given an opportunity to have a fully fleshed out and active story alongside that of her paramour, Henry (Chinaza Uche), who finds himself stationed in the South with Union troops, teaching Black soldiers how to read and write. But the regiment is unarmed and ill-equipped, revealing how even those fighting on the right side of history maintained their own white privilege amongst men they were supposedly praising for their bravery.

And as Lavinia (Anna Baryshnikov) wonders whether she’ll ever marry, brother Austin (Adrian Enscoe) bemoans his own marriage by drinking and blaming their father, Edward (Toby Huss). The Dickinson patriarch has come a long way in regards to his views on Emily’s career, but his personal growth can only extend so far in the 1860s. Huss has always been a joy on this show, but this season he truly dominates, whether getting high with Mrs. Dickinson (a delightfully batty Jane Krakowski) or trying to bond with Lavinia. But the times are changing, and Edward can’t find where he truly fits in, certainly not with the Republican Party of his state or the trusteeship of a local asylum that wants to incarcerate Emily.

Emily, too, finds herself at odds with her place in the world — and in history. One episode finds her traveling to the future with Lavinia, where fellow poet Sylvia Plath (Chloe Fineman) tells Emily that the world sees her as a sad, lonely spinster who never left her bedroom. As Plath says, “The future never comes for women.” Emily points out that’s not true, but it brings up the question of who gets to tell stories and what their motives are.

Series creator Alena Smith has always shown a knack for retconning history to introduce historical figures and offer a fresh perspective on them. In the case of Emily herself, the “sad spinster” narrative sold a cautionary tale for women to get married or risk a life of sickness and loneliness; a thread continued in Fineman’s sardonic portrayal of another famous woman deemed “crazy.” And this season finds Billy Eichner and Zosia Mamet appear as Walt Whitman and Louisa May Alcott, respectively, in one of the series’ more pointed critiques about crisis opportunism.

Emily visits a war hospital in order to meet Whitman, whose writing she’s fallen for after reading “Leaves of Grass.” But upon arrival, she’s struck by how uninterested both Whitman and Alcott are in the dying men around them. Eichner’s Whitman almost sees them as Method actors, even having Emily lie to a dying man and claim to be his sister; Mamet’s Alcott sees them as grist for future writing, complaining only about the smell of their wounds.

The season opens by recapping how, because of Dickinson’s seclusion she’s never been considered a war poet, but maybe Smith is saying it’s because Dickinson didn’t want to be one of the numerous war writers who exploited the war for their own professional aims. Beneath Emily’s personal issues is a stark critique on creatives profiting off of war, illness, and trauma. Louisa May Alcott and Walt Whitman’s self-aggrandizing natures rule the day and, by that same token, maybe serve as a reason for Emily’s refusal to publish and profit off her poetry.

Over three seasons, audiences watched Emily fight to be a writer, fight to be published, and now fight to know if her writing changed the world. It did and does, partly through the show’s very existence. Smith has shared photos of fans who tattooed Dickinson’s words on their bodies; “Dickinson” has probably done more to bring poetry to audiences than the last 50 years of scholarly articles.

And yet Dickinson, the real person, never left her Amherst bubble. Our final glimpses of Emily see her retreating to a land of fantasy after a devastating reminder that her sex will always bind her to male interests. Smith leaves us with the image not of a spinster retreating into seclusion, but a woman who realized the future wasn’t going to be what she envisioned, but what she made it. Retreating brought her control; it brought her love; and it brought her poetry. And in the end, “Dickinson” brought us those same feelings as well.

Why Did Madonna and Gwyneth Paltrow’s Friendship End?