Each new episode of “Devs” takes its time diving back into the world the show has created. But it’s not done through the standard “Previously on” rewind that many other series use. If anything, these episode preludes set the stage for what’s to come.

“I was trying to work with a convention that I noticed on TV, a recap. And this was a sort of slightly more abstract recap, because it’s really a foreshadowing a lot of the time,” series writer/director Alex Garland told IndieWire.

An episode-by-episode marker that’s facing both backward and forward in time ends up being a pretty solid metaphor for what the rest of the show is dealing with at this point in the story. In Episode 5, the table-setting idea is a visual representation of multiple iterations in the lives of Lily (Sonoya Mizuno) and the men closest to her. It’s the latest on-screen development in an award-winning collaboration that continues behind the scenes on various Garland projects.

“The challenge was, it’s one thing to write it and then at a certain point, you have to have something that you can stick a camera at,” Garland said. “Andrew Whitehurst is the visual effects supervisor and was the visual effects supervisor on ‘Annihilation’ and Ex Machina.’ And like me, we share an interest in exactly the same areas of science and often talk to each other to try and help each other understand.”

Like many other ideas swimming around in the giant, growing “Devs” pool, showing multiple Lilys and Jamies and Sergeis were easier to comprehend in theory than they were to put into practice.

“We really struggled with how to show that vision because in a way, the best way to represent it would really be a blur. The potential variations between the states would be tiny a lot of the time. They also would include someone standing on the other side of the room or in Brazil. So we struggled and struggled,” Garland said. “We tried working up sensors that were blurs. Some of them were a bit like Francis Bacon, they were these sort of strange vibrating states. But they lacked clarity and that meant they lacked impact. So in the end, we just came up with something that was simple. In a way it’s sort of like saying ‘We’ll only show you five. There’s a near infinite number but here’s five.’” 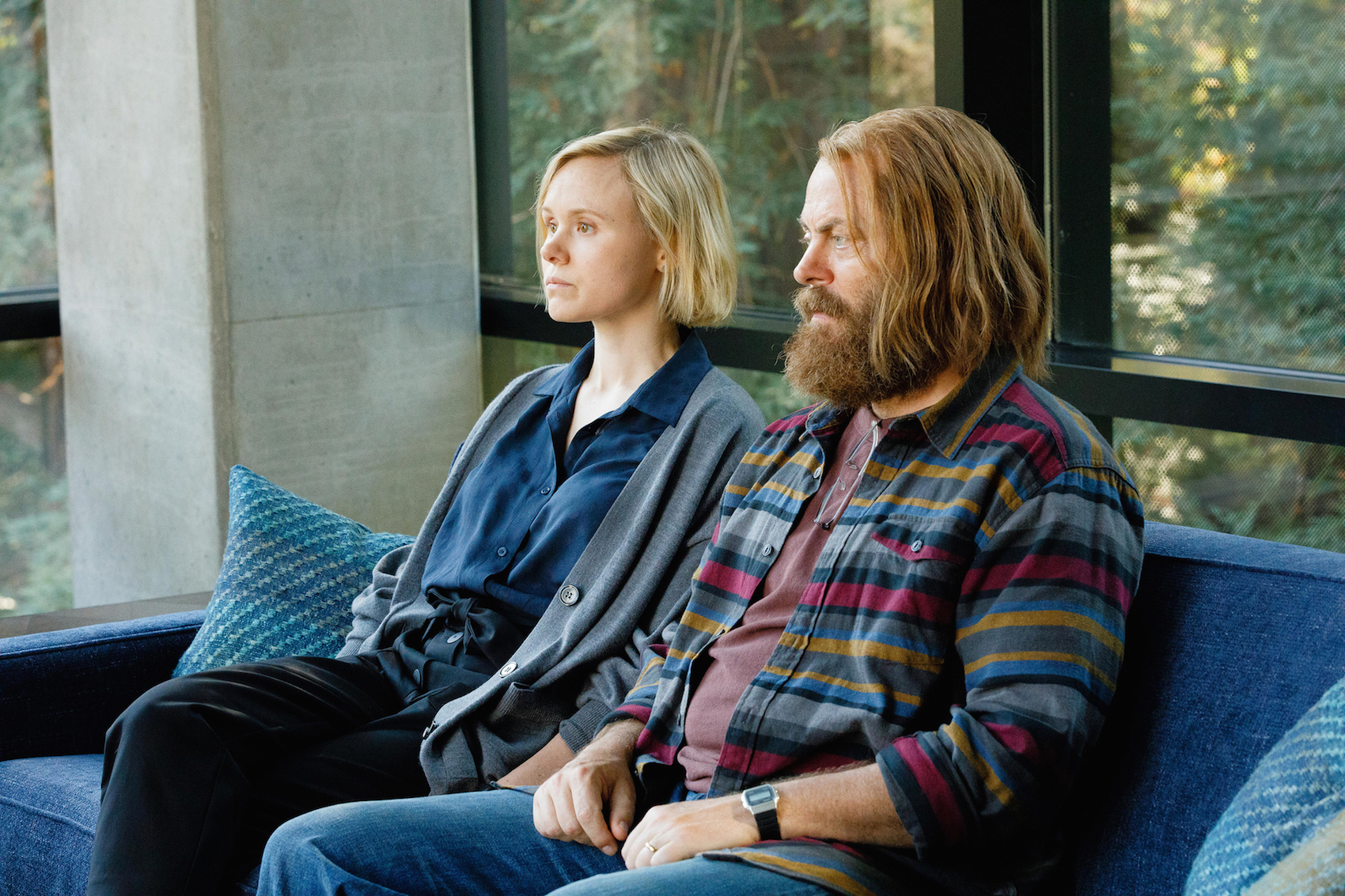 That idea stretches across the life of another key figure in “Devs.” In one of the more harrowing sequences of the series so far, the audience sees Forest (Nick Offerman) on the day that his wife and daughter were involved in a fatal car accident. Connecting his greatest trauma to the ideas that his current work is exploring, “Devs” shows a parade of near misses, repeated crashes, and possible outcomes in which a minuscule change would have spared their lives.

It’s the second week in a row that a scene involving cars and streets have signaled a specific brand of chaos within the “Devs” world. While Forest’s part in Episode 5 happens in the relative quiet of a peaceful neighborhood. Lily’s escape from a dangerous and determined Kenton happens in the middle of a busy Bay Area freeway.

“I really learned a lesson about physical acting in that moment. I’ve never been in a car crash before, so getting to the high level of stakes that was needed was a real challenge for me. And that was one of the moments where Alex had to really push,” Mizuno said. “We shot it in the Cotswolds in England. There was an old fire practice station with this motorway that we were using. They had about a dozen real cars [driving past]. I remember afterwards Alex said, ‘Next time you’re in a movie and you’re in a spaceship and it crashes, you’re going to know what to do.’ And it’s true. Before that, I didn’t know how I should be breathing or how terrified I would be.”

This idea of examining multiples possibilities and missed chances only serves to underline the importance of interpersonal interactions within the “Devs” story. Lily’s conflicted feelings toward Jamie (Jin Ha) and lingering questions about what happened to Sergei (Karl Glusman) is a single layer in a show defined by a rich array of different interactions, including Devs members Lyndon (Cailee Spaeny) and Stewart (Stephen McKinley Henderson).

“I wanted people who were important to each other. This prodigiously, wonderfully talented young boy with this older software engineer who’s very talented, but knows he is not as talented as this boy. He doesn’t feel rivalrous, he feels protective and admiring, and the boy feels reassured and comforted,” Garland said. “They’re not couples romantically necessarily. A lot of them are friendships. Sometimes it’s a father and a daughter and colleagues or lovers or ex-lovers. Part of the underlying thing of the story is that the science is strange and that leads to strange philosophy and we all have to live in it. How do we do that? We do it via relationships.”

New episodes of “Devs” premiere via FX on Hulu every Thursday.

Beyoncé Shares Video to Show What the Personalities of Her Twins, Rumi and Sir, Are Really Like
Recent Posts