Plus: Andrew Yang says Russians are “laughing their asses off” and Marianne Williamson says “love will win” 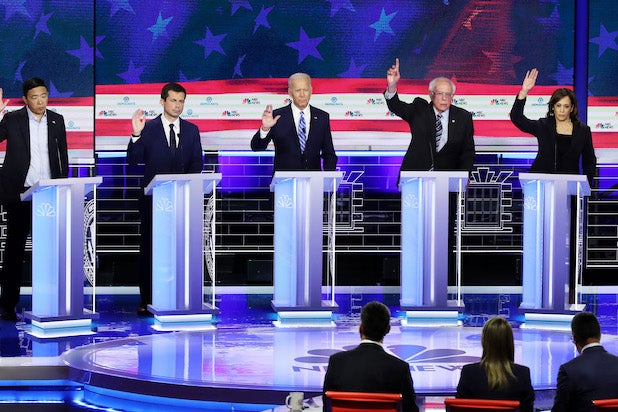 While the second Democratic debate didn’t feature any dueling Spanish or major technical difficulties like the first, it proved to be more heated as several candidates directly challenged the field’s frontrunner, former Vice President Joe Biden.

Rep. Eric Swalwell said Biden should “pass the torch” to the next generation, while Sen. Kamala Harris said she was hurt by Biden’s former position on racial issues in America.

And yet there were also some moments of levity among the candidates, particularly from the political outsiders: former tech executive Andrew Yang and author/activist Marianne Williamson. Here are five of the biggest breakout moments from the second Democratic debate.

Rep. Eric Swalwell went on the offensive early Thursday night, saying when he was just six years old, he recalled seeing then-senator Joe Biden speak at the Democratic convention and said that it was important that the politicians in Washington “pass the torch” to the next generation. “Joe Biden was right,” Swalwell said, a comment that earned a big grin and a quick response from the former VP.

“I’m still holding on to that torch,” Biden said in response to Swalwell, explaining how education is the key to the future: aiding schools in distress, tripling Title I funding, having universal pre-K and providing for post-high school education.

At 76, Biden is twice Swalwell’s age. But it was 77-year-old Bernie Sanders who downplayed the generation gap between the candidates. “As part of Joe’s generation let me respond. The issue is not generational. The issue is who has the guts to take on Wall Street? To take on the fossil fuel industry. To take on the big money interests who have unbelievable influence over the economic and political life in this country. “

It was the first instance in which the candidates all began talking over one another, a notable difference from the previous evening’s debate. Kamala Harris rose above the cross-talk with a quick one-liner: “Hey guys, America does not want to witness a food fight, they want to know how we’re going to put food on their table.”

2. Kamala Harris got “personal” about race in America

One of the most intense moments during the debate came between Biden and Harris, in which Harris took Biden to task for recent comments in which he described his success working with segregationist senators.

“I do not believe you are a racist,” the senator from California said, directly addressing Biden. “But it was personal, it was hurtful for you to talk about the reputation of two United States senators who built their reputations and careers on segregation of race in this country.”

Harris said she was specifically affected based on his position on integration when it came to bussing students to school, though Biden called Harris’s comments a “mischaracterization” and even took a shot back at Harris’saying that he was a public defender and not a prosecutor early in his career as she was.

3. Andrew Yang was very laid back

Andrew Yang already stands out from the rest of the Democratic field as something of a political outsider, a former tech executive rather than a career politician. And many Americans got to hear for the first time his plan to offer $1000 to every American as part of a “trickle up” approach to the economy. But his economic policies weren’t the only thing that made Yang stand out from the crowd.

“Yang is blazing ground here … no tie,” MSNBC’s Brian Williams said as the candidates stepped onto the debate stage for their photo-ops, in which Yang appeared without a necktie.

He was so laid back in the evening, he even casually noted that Russia must be “laughing their asses off” at their ability to hack America’s electoral process.

The Internet meme candidate of the evening was none other than Marianne Williamson. The author/activist didn’t get much screentime during the debate, but she made it count. During her closing remarks, she said an unusual approach to beating Donald Trump.

“I’m going to harness love for political purposes,” Williamson said. “I’m going to meet you on that field, and sir, love will win.”

But her finest moment came when the candidates were each asked to give a brief, one- to two-word response about what they would do on Day 1 of their presidency. Williamson, curiously, said she would call the President of New Zealand, who Williamson claimed previously boasted that her country was the best place in the world to raise a child.

“Girlfriend, you are so wrong, because the United States of America is the best place in the world to grow up,” Williamson said.

The Internet had a ball with that answer, imagining what else she might do on her first day in office. See a few of those reactions below:

5. There was one technical “fake-out”

The night wasn’t without its mishaps. Though nothing was as disruptive as Wednesday’s microphone issues, in the last half-hour of the debate, moderator Rachel Maddow planned to toss to Lester Holt for an audience question, but the segment wasn’t ready.

“That was just a fake-out,” Maddow joked before quickly pivoting to another debate topic. Holt did however get in one audience question near the very end of the broadcast.

Cardi B POPS OFF On Reporter After Getting Ambushed! WATCH!

MTV 'Are You The One' Season 8 Premiere: Getaway Challenge and First Truth Booth
Recent Posts