A female screenwriter for the popular film Crazy Rich Asians has left the Warner Bros. sequel over what she alleges was a pay disparity with a white male counterpart.

Adele Lim, a veteran television writer who helped to bring Singaporean author Kevin Kwan's book to life last year, said in a Hollywood Reporter story on Wednesday that she was offered significantly less than co-screenwriter Peter Chiarelli to work on the sequel to Crazy Rich Asians, a blockbuster hit that was lauded for bringing Asian American narratives to a mainstream audience and boosting the profile of under-represented Asian American actors in Hollywood. 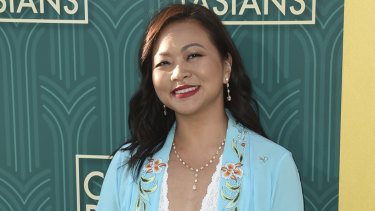 Adele Lim at the premiere of Crazy Rich Asians at the TCL Chinese Theatre in Los Angeles in August last year. Credit:Richard Shotwell/Invision/AP

Lim's publicist confirmed to The Washington Post that the pay disparity was why she left the project.

The screenwriter declined to provide exact numbers, but according to sources who spoke to The Hollywood Reporter, her starting offer was $US110,000 ($162,000) – nearly one-tenth of the $800,000 to $1 million offered to Chiarelli. Lim said she believes women and people of colour tend to be brought onto projects as "soy sauce", tasked and credited with adding cultural texture but not with the heavy work of storytelling.

"Being evaluated that way can't help but make you feel that is how they view my contributions," Lim told The Hollywood Reporter.

Lim, who has worked on shows such as One Tree Hill and Private Practice, said in a 2018 interview with the Los Angeles Times that director Jon M. Chu tapped her to join Chiarelli in adapting Kwan's books for screen because the film has a female protagonist – played by Constance Wu – and he wanted a female perspective in the writer's room.

Lim's departure puts a wrench in Chu's plans to keep the cast and production team intact for the upcoming sequels based on Kwan's other books, China Rich Girlfriend and Rich People Problems.

According to The Hollywood Reporter, Chiarelli, whose other writing credits include Now You See Me 2 and The Proposal, offered to split his fee with Lim, but she declined the gesture.

"Pete has been nothing but incredibly gracious, but what I make shouldn't be dependent on the generosity of the white-guy writer," she said. "If I couldn't get pay equity after CRA, I can't imagine what it would be like for anyone else."

Lim, a Chinese Malaysian, was celebrated for bringing authenticity to Crazy Rich Asians as one of the few screenwriters from south-east Asia, where Kwan's books are set.

"When I came on, we basically talked about how I grew up in this culture," she said. "Important doesn't begin to describe it when you're talking about describing a culture and a family that the world – that America – hasn't seen before. You want it to come from an authentic perspective."

In an interview with Awards Daily, she said she and Chu went out of their way to get "little cultural details" just right.

"Even if it goes over the head of the mainstream audience, the south-east Asians of the world can see it was very much done for them," she said. "It's very much a love letter to all those people."

Andy Cohen Believes Bethenny Will Return to ‘RHONY': ‘We’re Like the Mob’