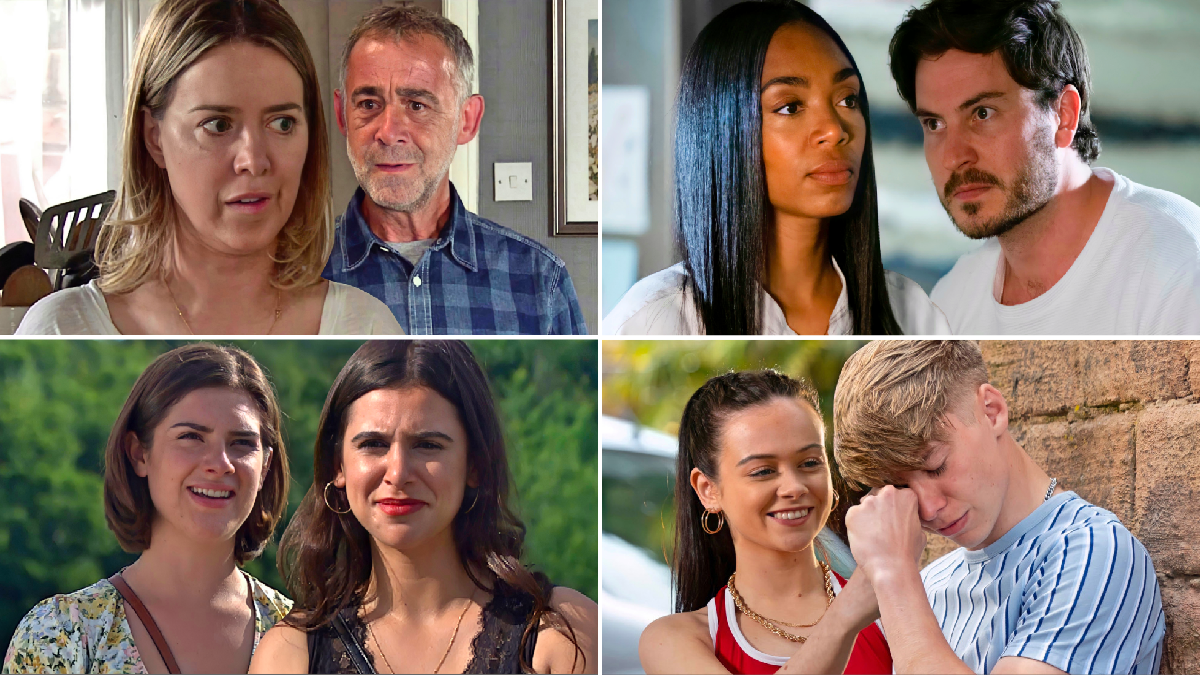 It’s a week of huge showdowns and shock revelations, as some of soap’s finest learn shocking truths, while others are confronted by killers.

Abi Franklin is stunned in Coronation Street to find out that killer Corey Brent’s identity has been leaked online, which could jeopardise the trial.

Over in EastEnders, Chelsea Fox is stunned when Gray Atkins confronts her over her wearing Chantelle’s ring in what can only be described as a sinister showdown.

Emmerdale’s Meena Jutla does something similar with Victoria Barton, albeit in a much more subtle way, as she manipulates her love rival into spending some alone time with her. Does she have murder on the mind?

It’s going to be one unmissable week in the land of soap next week, that’s for sure, and if you’d like to know all there is to know about what’s ahead, then you’ve certainly come to the right place!

1. Maria is stunned when Liam starts gasping, unable to breathe. The ambulance arrives on the cobbles, but struggles to turn onto the street, due to the double-parked cars. At the hospital, Liam is diagnosed with asthma, and when Maria learns that air pollution caused by traffic fumes is a common cause for the condition, she vents her anger at Sarah, believing that the Underworld van is largely responsible. But when Sarah refuses to move the vehicle, Maria reacts violently.

2. Abi is concerned when she finds out that Tommy Orpington has been lined up as a character witness for Corey. Jack is perturbed by such news, but Sally tells him that Tommy wouldn’t support Corey if he knew the truth. Toyah, meanwhile, is left in shock when Simon reveals that Corey’s identity has been leaked on a Tommy Orpington fansite! When Abi finds this out, she’s horrified, as it could jeopardise the trial! The police call to speak to Jack about the online posts.

3. Imran’s ex-wife Sabeen arrives on the street, but the bigger shock comes when he discovers that she is a barrister on Corey’s large defence team! Sabeen claims Imran doesn’t stand a chance of securing Kelly’s acquittal, and later suggests that they ask the court to take both Kelly and Corey’s ages into account. Abi, meanwhile, accuses Imran of using Jack’s mistake to delay the trial, and he later tells Toyah that’s exactly what he’s doing!

4. The day of the pre-trial review arrives, and Imran reveals he has new evidence about the blood splatters on Kelly’s trainers, but he is conflicted once more when Kelly and Corey are offered a reduced plea of manslaughter.

5. Todd conducts a thorough clear out of the storeroom at the undertakers, but he receives quite the shock when he finds Phelan’s ashes! George reveals that he’s never found the right moment to tell Eileen about them.

6. Tyrone is feeling guilty regarding his feelings for Fiz, and the pair are awkward with one another. Emma, meanwhile, spots the former couple together, and she grows suspicious. Tyrone presents Alina with the expensive ring she wanted, but Emma’s not sure that he’s being genuine, or if the gesture was simply for her benefit.

7. Ronnie urges Michael to tell Grace that he doesn’t love her. Michael, knowing his uncle is right, does just that. Afterwards, Grace attempts to leave with Glory, but Aggie blocks her exit. Grace declares that she will only stay in Weatherfield if the Baileys give her the house they’re renovating. Will they agree to her demands?

8. Kat is worried about Tommy’s online search history, so she questions Lexi, who reveals that he’s has been speaking to a woman online. Kat decides to remove all of his devices as punishment, but this does little to solve the problem as he later runs off to meet a woman while in Whitney’s care! A search commences, and Tommy is found, but Kat’s joy is short-lived when Tommy reveals who he was meeting with.

9. Keegan tells Mitch about how he cheated on Tiffany. Mitch advises him to come clean, and he resolves to do just that, but Dotty does everything she can to convince Keegan to keep quiet. In the end, she succeeds. Little do they know that Vinny, who is out in the hallway, has heard every word! Keegan, meanwhile, sets in motion a romantic date with Tiffany, but Vinny spots Tiff and tells her everything!

10. Kathy opens up to Karen, revealing that she doesn’t have a date for Whitney’s upcoming gig. Karen suggests that she bring Harvey along! She seemingly takes Karen up on her advice, as she soon arrives at The Vic with Harvey by her side, much to Bobby and Dana’s shock. Rocky approaches Kathy, having clocked her in Harvey’s company, and tells her he’s happy that she’s moved on. Kathy, however, is once again stung by his nonchalance.

11. Whitney’s music gig is the catalyst in the violent crime, as two men are seen eyeing up the charity bucket in the Queen Vic. Having been pushed by Rocky to show off her impressive voice, Whitney takes to the stage, and the crowd adore her. Mick joins a couple of the punters and Whitney herself in heading off to the cafe, while Linda remains behind to lock up. The two men from before return and grab Linda, who is petrified! Nancy, meanwhile, is hiding away upstairs with beau Zack. When he hears a noise, however, Zack puts himself in harm’s way as he rushes down stairs to find out what’s going on!

12. Chelsea clocks James, the fella she hooked up with, while out for a drink with Gray. In a bizarre twist of fate, Gray knows this James, and asks him if he wants to get a drink. Not one to miss out on a challenge, Chelsea decides that she’s going to take a risk, as she lines up a date with James, while Gray is at the bar! Will she get what she wants?

13. After a trip to a pawn shop, Chelsea returns home wearing Chantelle’s ring. Gray lashes out, ordering her to remove the item of jewellery at once. Chelsea, evidently shaken, relays what happened to Kim and Jack. Jack, however, doesn’t think anything of it and berates Chelsea for her lack of empathy! Jack later confronts Gray, but the evil killer brushes him off, desperate to make things right with Chelsea.

14. Martin attempts to withdraw some cash, only to be told that he has insufficient funds! Determined to get to the bottom of it, he quizzes Ruby, asking if she has been giving all their money to Jean. Ruby reveals that Jean has terminal cancer, leaving him speechless.

15. Liv struggles, and ends up back on the booze. She wakes with feelings of confusion and regret, with bruises on her arms, and no idea of what’s transpired, all the while experiencing flashbacks. She figures out that she struggled with Noah, and Gabby suggests that they might be dealing with the aftermath of rape, as she’s uneasy over her own run-ins with him. Aaron, however, overhears the conversation, and storms off to confront Noah.

16. David and Victoria are on speaking terms in the wake of what happened with Theo, but Meena interrupts, and invites Victoria to hang out with her. Meena promises David she’ll take excellent care of her, but the subtext in her tone speaks volumes.

17. Wendy’s ex Russ arrives on her doorstep, demanding that they talk about his mum’s will. He demands his inheritance back, and refuses to leave until he gets it. Wendy, feeling bullied, introduces Victoria to Russ as Harry’s granddad, and she’s soon won over. Russ plays the doting granddad, but Wendy’s uneasiness is evident, as he intends to make Victoria’s life a living hell if he doesn’t get what he’s after.

18. Charity is devastated to learn Vanessa has a new girlfriend.

19. Tracy is left in shock when she returns, as Nate gets down on one knee and pops the question! Will she say yes? That remains to be seen, but her stresses continue to bubble over later in the week, as she hides her anxiety over looking after Frankie alone.

20. Chloe, sister of Sarah’s heart donor, arrives in the village to speak to Sarah, who’s apologetic over recent events. Chloe softens, telling Sarah whenever she feels up to it, she’ll tell her all about her late sister Gemma. Sarah is eager to know more, and Chloe gives her a bracelet belonging to Gemma. Noah, meanwhile, watches from afar.

21. Sid starts to swerve texts he’s been receiving from Demi, and he admits to Juliet that he’s attempting to hide his prosthetic leg. He ultimately resolves to go through with the date, but while awaiting Demi’s arrival, Tony points out that there is blood on his trousers. Sid, horrified, rushes off. Juliet meddles, setting Sid up with Demi, but Sid soon discovers Juliet has told Demi all about his prosthetic leg. He lashes out at Juliet, and revisits where the accident took place.

22. Maxine is left in shock as she wakes up next to naked Fergus. Fergus explains all the steamy details, as she struggles to remember what’s happened. Maxine wants to come clean, but Fergus tries to guilt her into keeping it a secret. The question is: will she listen?

23. Mercedes is speechless when Donna-Marie demands more money, forcing her to take drastic action. She plots to spike Donna Marie’s drink, but will she go through with it? That remains to be seen, but the landlady soon has to deal with the consequences of her actions, following a shocking turn of events.

24. Romeo opens up to Cher, admitting that he doesn’t love her. She’s hurt, and after some dangerous advice from online friend ‘Jade’, she makes a shocking mistake, as she’s poisoned the wrong person and faces some repercussions.

25. Tony attempts to stay optimistic in spite of his money worries. Diane is coping well with everything, that is until she discovers that The Dog is closed due to one of the McQueens having fallen sick. She comes to believe the supplier they share is responsible, and therefore she pours all the alcohol down the sink!

At the end of the world there is love: winners of 2021 CBCA awards announced