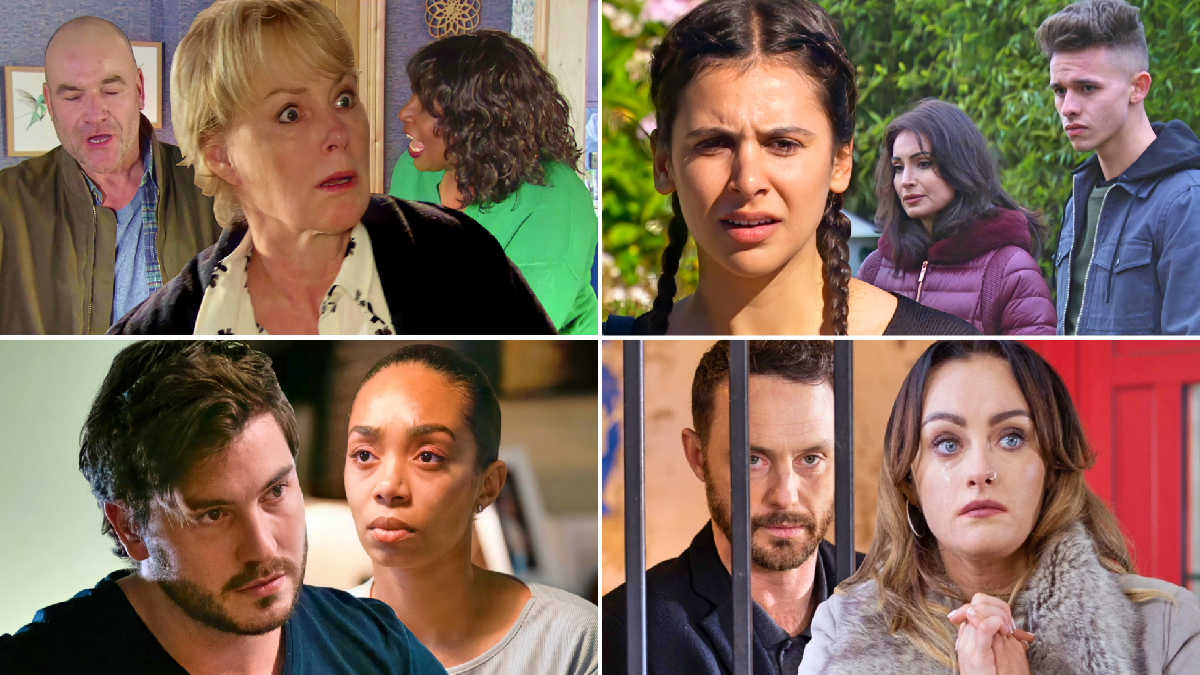 With the new year having got off to an explosive start, you might think things would slow down in the land of soap now, but it appears as if our favourite serial dramas are only just getting started.

Next week, Coronation Street is home to shocks and discoveries aplenty, as Sally Metcalfe finally discovers Tim’s secret, but not before she accuses him of having an affair with Aggie Bailey!

Emmerdale, meanwhile, sees Mackenzie Boyd meddle in Al Chapman’s affairs, leading to both he and Cain Dingle sharing a heated exchange with the mysterious Gavin.

Gray Atkins does everything he can to isolate Chelsea Fox in EastEnders, who is desperate to set the next step of her plan to escape the killer in motion, while Hollyoaks deals the aftermath of a huge tragedy.

If you simply cannot wait to see the action unfold, then here’s all you need to know about what’s coming up next week!

Tim continues to hide his health concerns from Sally, as he pays George a visit to organise his funeral. Sally, however, is suspicious, and thus she puts a tracker on his phone. She comes to believe that he’s having an affair with Aggie and later finds them together, forcing Tim to tell her the truth. As does, however, he collapses with pain, clutching his chest.

Amy’s investigation into Summer’s upskirting ordeal leads her to discover that other girls’ privacy have been violated too, so she makes a stand, spraying ‘Stop Protecting Sex Offenders’ onto the side of the school. Mrs Crawshaw suspends her, but a viral post on social media from Summer leads the head teacher to reveal that she’ll be talking to the governors about a policy change.

Amy and Summer discover that the school expects girls to wear shirts under their skirts, and they’re appalled. The pupils fail to show up for class, and Mrs Crawshaw and Daniel later find Summer and Amy leading a protest against the upskirters. Daniel calls the gazette.

Craig strikes a wager with Tyrone, telling him he’s going to find the owner of the wooden crutch. Faye is horrified, but matters are complicated further when the policeman confirms he’s sent the crutch to the lab for fingerprint testing! Craig makes a breakthrough when Roy suggests that the initials ‘THS’ could stand for ‘Trafford Health Services’.

Mackenzie nicks Al’s phone, and he reads through messages between Al and Gavin. Both he and Cain later arrange a meeting with Gavin, while Chas begs Al to end his feud with Cain if she signs on the dotted line. Gavin, however, later confronts Al, telling him he’s pulling out go his development deal, demanding his money back! Chas, fuming over his scheming, disowns Cain.

Meena’s trinket box is just about visible in the wake of the damage to the allotment. Sam, however, inadvertently shoves dirt over it, covering it once more.

Johnny asks Charity for a playdate with Moses but Charity sticks her foot in it with Vanessa.

With the social worker assessing Kat regarding Scarlett, Janine asks Mick to use The Vic as her address. What’s more, she asks the landlord if he will fake being a couple for her meeting with social worker! Mick reluctantly agrees. Jay, however, berates him in front of everyone, claiming he’s having an affair. Stuart overhears, and assumes he’s talking about Rainie!

Phil is filled with guilt about not telling Kat the truth about his prison sentence. At the police station, DCI Keeble tells him his fate. The question is: just what lies ahead for the legend?

James is grieving in the aftermath of the blast. The question is: just who has perished? Becky, meanwhile, is very much alive, and she wastes little time in riling James, who in turn plays a dangerous game with her!

Ethan struggles following Maya’s death, as he works out what to do with his lover’s body. Darren is desperate to know if he and his family are safe in the wake of villainous Maya’s threats. But will Ethan spill?

Ste and Sienna hunt for their missing van. They find it in the garage with Ethan inside. The duo demand an explanation from Ethan as to why he took their vehicle, prompting the newcomer to open the boot, revealing a dead body inside! Ste attempts to make tracks, but Ethan pulls a gun on both he and Sienna! Sienna step in, telling Ethan she and Ste will assist him in burying the body if he agrees to let them live!