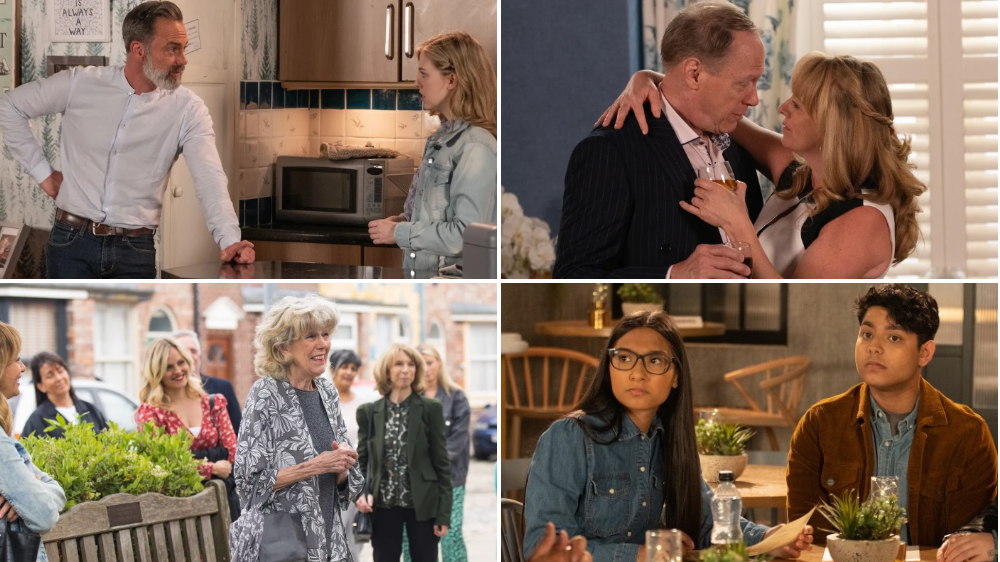 And when Dev (Jimmi Harkishin) kicks off, Aadi declares that if he can’t support them, he will be leaving for good.

Meanwhile, Jenny Connor (Sally Ann Matthews) makes a big mistake when she shares a kiss with suspected con artist Stephan (Todd Boyce) – and it is going to come back and bite her!

And Billy Mayhew (Daniel Brocklebank) struggles to know how to deal with Summer Spellman (Harriet Bibby).

Aadi and Kelly learn that because they’re under 18, the Gazette competition rules require written consent from their parents or guardians. With their ‘secret’ engagement all over the Gazette, Dev, Maria and Gary are all in agreement that Aadi and Kelly are far too young to get married.

As Dev and Aadi row over Kelly’s background, Dev grabs Aadi causing him to fall and hit his head. Telling Dev that he’s leaving for good, Aadi storms out.

Over a slap-up lunch at Speed Daal to celebrate her 18th birthday, Billy hands Summer a letter which her Dad asked him to give her on her 18th. Summer admits to Billy she’s scared of opening the letter.

Billy reveals the diabetic nurse called to confirm she is eligible for a glucose monitor, Summer’s upset that Billy and Aaron went behind her back. After a row with Aaron, Summer reads her Dad’s letter. Will it change her outlook?

Sean confides in Eileen how Dylan wants to move up here. Dylan admits that he lied about being bullied at school because he wants to live with him rather than in London. Sean agrees to speak to Violet.

Bernie assures Chesney and Gemma that she didn’t steal Joseph’s uniform. Fern returns the school uniform to Bernie and suggests that as they look so similar, maybe she can help her out. Sarah assures Stephen that she won’t let a knockback from the bank deter her and she’ll find the money some other way.

As the Platts gather for Audrey’s Salon launch party, Stephen badgers Audrey about signing for the trust fund. However he’s floored when she asserts that she’s changed her mind.

Audrey admits to her family that she tried to take her own life. As she explains how she overdosed, Audrey reveals that she’s made an ordinary will giving them each equal shares with the exception of Stephen who was kind enough to say he didn’t need it.

Leo takes up a labouring job with Ed but he’s sour about being stuck in Weatherfield. Jenny tells Leo that she doesn’t want to stand in the way of his future.

Asha begs Aadi not to cut Dev out of his life as he loves him. Aadi calls at the shop and hands Dev his Mum’s engagement ring. Dev is relieved to think the engagement is off.

Toyah and Peter are busy putting the world to rights when they’re joined by Spider and Griff. When Peter lets slip that Carla is doing business with Nadeem Atallah, Griff reveals that Nadeem is notorious for his unethical working practices and this could be their chance to expose him.

As Jenny assures Rita it was fun while it lasted but she’ll get over Leo, Rita’s not taken in by her bravado. Meanwhile, Stephen and Sarah pour over their business plan. When Sarah reveals that Jenny is the sole owner of the pub, Stephen’s interest is piqued.

Stephen turns on the charm and flirts with Jenny. A tipsy Jenny invites Stephen through to the back and handing him a drink, kisses him passionately.

Having had a talking to from Rita and Gemma, Leo returns holding an engagement ring. But as Gemma heads through to the back room with Leo will they find Jenny and Stephen in a clinch?

Toyah warns Carla that by doing business with Nadeem, she could damage her reputation. When Carla reveals it’s too late, the deal is done, Sarah’s furious to realise she’s been left out of the loop again.

Toyah meets up with Spider and Griff and confirms she’d like to play a part when they ambush Nadeem. But Toyah’s shocked when Spider tells her to back off.

When Ken spots Wendy in the cafe, he invites her to see a musical with him but she gives him the cold shoulder leaving Ken bemused. As Wendy goes to settle up, she’s annoyed when Ken steps in and pays her bill.

Ken assures her that he simply wants to be friends as he enjoyed her company the other evening and suggests they go for a drink. Will Wendy agree?

A proud Nick wishes Sam luck for his first day at high school. Back home Hope watches Sam slip a letter in the postbox. What is he up to? Mary does her best to drum up interest in her am dram production.