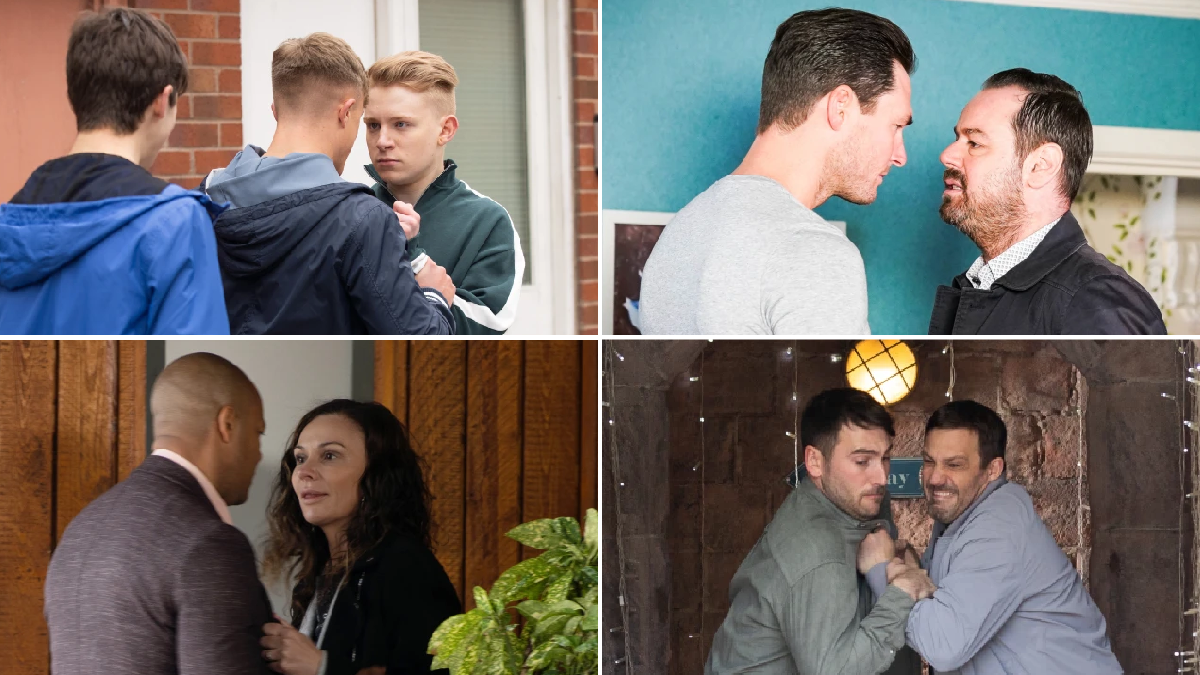 War is waged in all four corners of soapland next week, with animosity on the cards for a number of the genre’s finest.

Max Turner is horrified in Coronation Street when he’s catfished, and he subsequently takes his frustrations out on his new classmates.

Over in EastEnders, Mick Carter confronts Zack Hudson, as word of the latter’s night of passion with Sam Mitchell is made public knowledge.

Emmerdale, meanwhile, sees Cain Dingle on the warpath in the wake of his discovery that mum Faith is battling terminal cancer, while Hollyoaks’ Warren Fox attempts to give Damon Kinsella a piece of his mind.

Charming as ever, Warren.

It’s all kicking off, quite literally, and Metro.co.uk is once again bringing you all the spoilers you could possibly want.

1. Audrey’s reliance on alcohol leaves Gail incredibly concerned, and thus she attempts to convince her mum to cut back on the booze. Audrey, however, refuses, and returns to work at the barbers, much to David’s dismay. Things take a devastating turn when she staggers into the motorbike, which knocks her over, and she’s trapped, motionless, all night.

2. Stephen Reid, Audrey’s son, emerges from a taxi, and finds his mum out-cold on the barber’s shop’s floor. Gail is worried sick about Audrey, as Stephen goes in the ambulance with her.

3. Max receives a message from Sonya, asking him to send her a picture of ‘the whole package’. Despite his shock, he does just that, but Sonya reveals that she never sent any such messages! Max later receives a message demanding £1,000, or his picture will go viral.

4. A despondent Tim laments to Sally that changing his medication has had no benefit and he’s worried their sex life is over. Sally assures him that she loves him no matter what. Dr Gaddas recommends that he and Sally see a sex therapist, Tim’s not keen.

5. Peter tells Carla that there isn’t enough evidence to bring Mr Thorne to justice over what he did. Carla reckons he should let it lie, but has Peter got a back-up plan in mind?

6. Eileen despairs as George continues to ignore Frank. Having got the lowdown from his mum, Todd tells George they need to expose Frank for the bully that he is.

7. Maria tells Gary that the recycling collectors are going on strike because of the extra bins she set up and it’s all her fault.

8. Zack is wracked with guilt over his night of passion with Sam. He manages to get Sam out of the house, and subsequently confesses all to Martin, before resolving to tell Nancy the truth. Nancy, however, apologises for her behaviour, and thus Zack decides to keep quiet, but things soon take a turn, and Nancy finds out the truth.

9. Stuart is reluctant to look after Roland for the day and when he ignores his cries in the café, Sonia realises something is wrong. Sonia later visits Stuart and when he reveals he doesn’t feel anything for Roland, she gives him the details of a cancer mental health support group. When Vi returns and reveals Sonia has spoken to her, Stuart snaps and throws the support group information in the bin; he doesn’t want to be Roland’s dad.

10. After Harvey and Mitch were beaten up, Kat frets to Sharon about the situation and suggests they delay the opening night at Peggy’s.

11. Patrick reminds Kim that Howie is injured because of her and she needs to help him find work. She later positions herself as his manager, setting up a job with Martin for Lily’s birthday.

12. Nancy turns up and realises Zack has set her up to see Linda. Despite the tension, Nancy and Linda have a heart-to-heart.

13. A distraught Chelsea blames herself for Jordan being sick with suspected meningitis leaving Whitney concerned. Kim arrives and offers some comforting words and Chelsea is relieved to learn Jordan is in the clear.

14. Stacey realises Kheerat is keeping their relationship from his family and assumes it’s because he’s embarrassed. Later on, Kheerat assures her she’s wrong, but he wants it to be just them for a while with no one else meddling.

15. Chas struggles in the wake of learning about Faith’s cancer. With Paddy feeling useless, Chas seeks comfort in Al, who offers her support during her difficult time. His advice proves fruitful, as she apologises to Faith for pushing her towards chemo. After lashing out at Paddy, the landlady tells Al that she wants to forget everything, and thus they share a kiss.

16. Leyla is left blindsided when her dealer blackmails her, demanding that she get Jai back in his books, or he’ll cut off her cocaine. Suzy, meanwhile, continue to chastise Leyla for buying drugs, but Leyla turns the tables, as she blackmails Suzy over Holly’s death, insisting that she hand over her dealer’s number.

17. Nicola continues to struggle in the wake of her attack.

18. Sam is stunned when Lydia reveals a brochure of expensive caravans. They’re nothing like the cheap one he’s already bought her. Upset Sam decides to scrap the caravan he’s bought for Lydia in fear that it won’t be good enough for her but when Lydia cottons on, she forms a plan.

19. David is worried sick about money.

20. Cain lashes out at Liam after learning he also knew about Faith’s cancer and throws him to the ground.

21. Sienna feels threatened when Liberty asks Damon to adopt Faith, and she relays her concerns to Warren, who resorts to intimidation and scare tactics in a bid to deter Damon. But some brutal truths leave him feeling incredibly hurt, and thus he decides to come clean about Brody’s murder. Sienna, meanwhile, makes a discovery via the recorder on Sophie’s teddybear!

22. Wendy plots to kidnap Bobby, tricking the young boy into stealing his own passport. Mercedes springs into action, confronting her nemesis in a one-on-one showdown, but Wendy cleverly tugs on her heartstrings, and thus Mercedes allows her to see Bobby one final time. Subsequent scenes will see Mercedes receive shocking news, as she learns that Wendy has been in a devastating accident.

23. Olivia tries to convince her fiancé to take charge in his partnership with Romeo, but will he take her advice?

24. John Paul follows advice from his sponsor, and his efforts to tackle his alcoholism are rewarded.

25. Juliet and Peri are roped into accompanying Nadira to her wedding planner appointment. Things take a turn when Peri admits to snooping through Juliet’s phone, but can the trust be rebuilt between them?