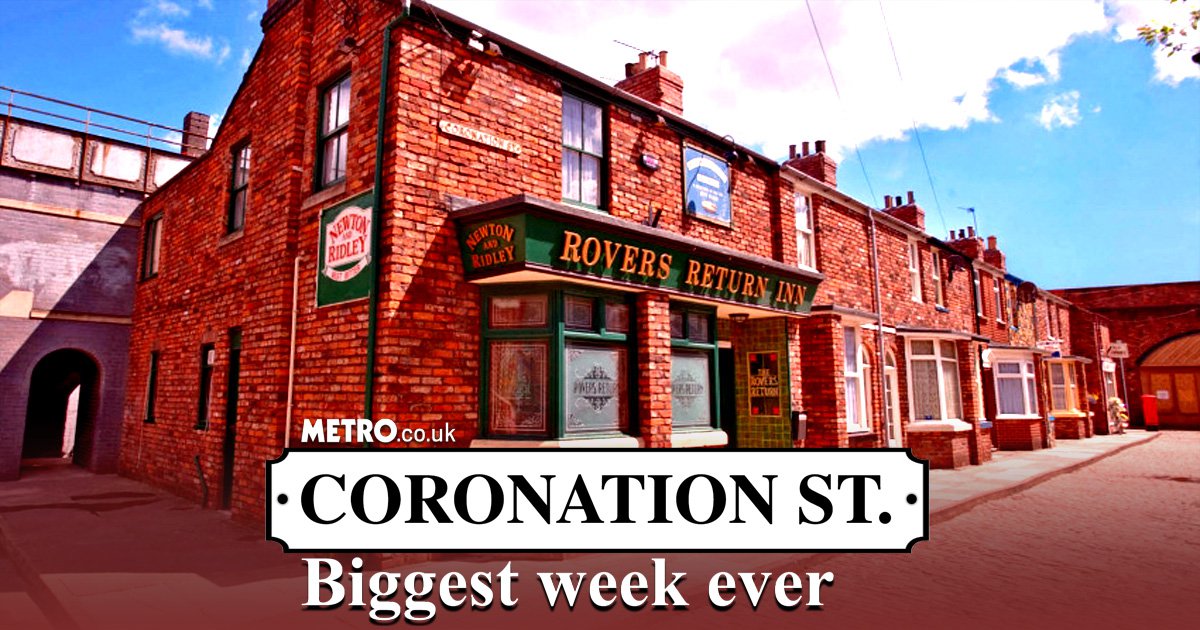 Coronation Street had planned to go all out for its landmark 60th anniversary, with Iain MacLeod promising Metro.co.uk that the plans were huge – a chat we had in a pre-Covid world, if you can remember such a time.

Thankfully, despite the restrictions, they still managed to create huge drama with the battle against Ray Crosby and the culmination of Geoff and Yasmeen’s abuse storyline.

But the producer has admitted that the sinkhole stunt that plays out in coming weeks was originally going to be the backdrop for all of the drama.

But he has kept the gaping hole in the Platt garden all this time, knowing that there would come a time when the team could utilise it and go all out!

And that time has come!

Iain told us: ‘When we first collapsed the Platts’ garden with a sinkhole it was with half an eye of doing something in the 60th but the Covid restrictions meant we couldn’t do what we wanted. Production keep saying, “shall we fill this hole in?” NO! We have a plan for that! I was adamant!

‘We have finally got a stage due to the professional graft of our crew that we are finally able to do what we had in mind. It was always the plan and a frustrating wait. Every time the sinkhole is referenced I thought, “oh I just want to get on with it!”

The Platt sinkhole happened during the Roy Crosby story – so maybe more than a year ago now? Since then, I have been desperately waiting for the moment. The specifics for the week, it arose in March and April when the network asked for this big week to really showcase the show. We plan things six months in advance – if you’re like me, you hate delayed gratification so it’s been a long old wait!’

Of course, the storylines at the centre of it all have been altered and adapted but one thing Iain has been set on was a chapter in the hate crime storyline to involve high octane jeopardy. But he insists that this isn’t the climax and there is more to come that doesn’t involve tidal waves in subterranean Victorian sewers.

He shared: ‘That story has been among our biggest storylines of the year, if not the biggest. The actors involved are stellar, it has made some important points about kindness and the world we live in today. Equally it occupies an area that lends itself to a high octane chapter. It’s not the end of the story by the way.

‘But it felt weird not to have the biggest story of the year in the biggest week. There was always going to be a chapter where the people most affected by what he had done would have a battle with their conscience over how to get revenge. The detail has been in the pipeline longer than the sinkhole. It was an element pitched two years ago.

‘Corey is one of the most disliked characters for very obvious reasons but you couldn’t meet a nicer lad than Max. He is such a brilliant actor and he embodies this pure evil in Corey. The scenes between him and Abi are emotional, incredibly tense and look fantastic. It wouldn’t be out of place in a movie.’

Netflix's Maid Is Set in Washington, but Here's Where It Was Actually Filmed
Recent Posts