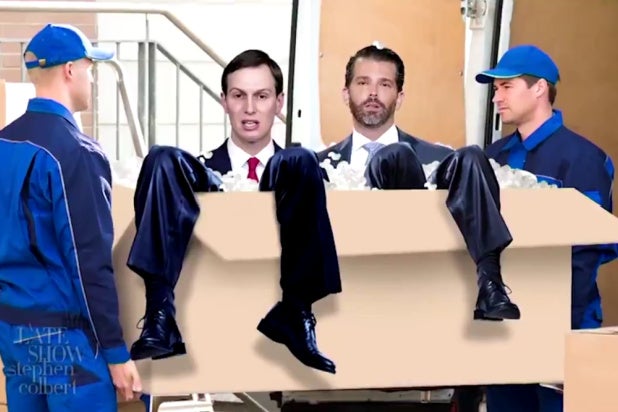 The United States is in a sort of limbo right now, with Joe Biden winning the presidential election and Donald Trump refusing to accept that reality. But “The Late Show With Stephen Colbert” has a potential solution for this problem: a moving company that specializes in dealing with “one-term presidents who just won’t leave.

This bit comes from one of the little cold open mini-sketches that “The Late Show With Stephen Colbert” usually starts with before the title sequence. One of the most common of these “Colbert” bits is the fake local TV commercial, and on Wednesday we got another one of these for a fake moving company called F-U-Haul.

The skit began, as with a short summary of the context for the joke. In this case, it cited a CNN article that read:

“Without the go-ahead to start planning for a move out of the White House in 64 days, there is no packing to begin and no moving trucks to book, leaving staffers in the limbo of ‘Do we stay or do we go?’”

And that’s when the commercial kicked in. You can watch full “Late Show With Stephen Colbert” skit below.

“Do you know somebody that lost their lease because of a free and fair election, but they’re refusing to move? Then call F-U-Haul, the leader in removing one-term presidents who just won’t leave!” The narrator proclaimed.

“We’ll carefully wrap the obsolete package and wheel it away. Whether crosstown or via cargo ship with no specific destination, it’s that easy.”

But the jokes in this “Colbert” sketch didn’t just come at Trump’s expense.

“And F-U-Haul does a thorough job removing all the related garbage,” the narrator said, as viewers are treated to an image of Jared Kushner and Don Jr being hauled out in cardboard boxes.

“So call F-U-Haul today. Remember our motto,” the narrator says to end the skit. But he didn’t read the motto — instead they pulled up a clip of Trump yelling “Get him out of here!”