Wednesday’s episode of Chucky was a reunion to behold, and not just for “Jennifer,” Glen and Glenda.

Not only have the twins arrived at Tiffany’s doorstep (and just as she was in the process of hiding a body and cleaning up a lake of blood, mind you), but the fourth episode of Season 2 also served as a get-together for Bound co-stars Jennifer Tilly, Gina Gershon and Joe Pantoliano. In pure Chucky fashion, Gershon and Pantoliano also play fictionalized versions of themselves, in addition to Tilly’s real-life sister Meg Tilly and Real Housewives of Beverly Hills‘ star Sutton Stracke. And with a house full of unexpected guests, Tiffany spends the hour haphazardly trying to cover up her evil tracks and the abducted amputee she has hidden in the bedroom. It’s one for the record books, folks! Let’s dive into a full recap.

Shortly after the twins arrive, they ask their mom if they know a woman named Nica Pierce, which shocks Tiffany/”Jennifer” to her core. She says Nica is just a crazy stalker, and the reason why she had an alarm system installed. Glenda reveals they’ve been having violent dreams of a woman on fire and a man egging them on to kill (a callback to 2004’s Seed of Chucky, which was the last time we saw Chucky’s offspring.) Tiffany shrugs it off saying that, “You and Glen always had vibrant imaginations.” Parent of the year, that one!

Glen finds the locked door that hides the captive Nica, and learns that Tiff has “a butler” who’s been hired to guard it. The teen is suspicious to say the least. The twins surprise Tiffany with a party which includes Gershon, Stracke and “Uncle Pants.” Jennifer’s friends want to know what’s going on, since their friend hasn’t left her mansion in over a year. To make matters even weirder, the doorbell rings and Jen’s sister Meg joins the party. She tells Jen that ever since she did “that stupid Chucky movie,” things have been off. Clearly! 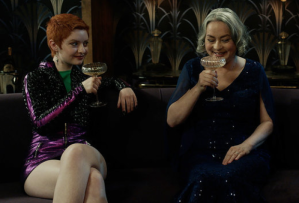 Later in the evening, “Jennifer” gets separated from her guests and notices on her phone that there’s been a breach in her security system. The power is out, her “butler” has been killed and the door to Nica’s room is wide open. Everyone gathers around the body, and Tiffany spins it as a murder mystery party! Jeeves (a hired actor, she says) is victim No. 1, and all of her party guests are suspects!

The group starts to spitball theories, but “Jennifer” needs to excuse herself after motion is detected in Nica’s bedroom. Gina follows and seconds later, her hand is up Tiffany’s skirt. We get a close-up of the actresses’ lips close together, a clear homage to their steamy scenes from Bound. Gina exits the room and Joe sneaks in, pinning Tiffany to the bed. He also makes a pass at her, but this time, it’s a little extra gross. 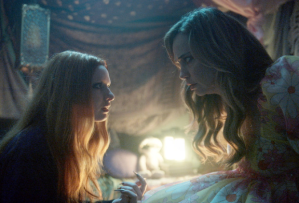 It’s revealed that Glen was the one trying to break Nica free. We flash back to three months prior, and watch as the twins sneak into the bedroom and find Nica tied to a chair. Nica tells them their mom is a psycho who chopped off all her limbs, and a few moments later, Glen and Glenda agree to help free her. After Glenda accidentally cuts her finger, Chucky takes over Nica’s body, once again reuniting father and child.

Back in the present, Glen pushes Nica toward the exit, but as soon as Nica sees blood, she morphs into Chucky and Glenda knocks Glen out. Glenda rolls Nica/Chucky out to the middle of the party. Nica/Chucky is donned with a robotic arm and he/she’s pointing a gun straight at Tiffany/”Jennifer.” (Man, these names have gotten confusing.) The gun, however, is surprisingly empty.

Sutton and Gina, of course, think all of this madness is some sort of performance. Amidst all of the chaos, Nica snaps out of it and takes off, rolling herself directly out of the house. Glen refuses to leave, but Glenda tells her to ask their mom who Tiffany Valentine is. Nica barely escapes the closing gates, as a white car with a ramp pulls up — it’s Kyle! Glenda hops over the gate and jumps into the car, as Tiffany screams and cries maniacally inside. “Brava!” cheers Gina, as she and Sutton clap appreciatively.

What’d you think of the Bound reunion and the return of Glen and Glenda? Surprised to see Kyle? Tell us all of your thoughts in the comments below.

Charli DAmelio Releases if you ask me to Music Video Watch Now!

The moment when superstar DJ was ‘at rock bottom’
Recent Posts