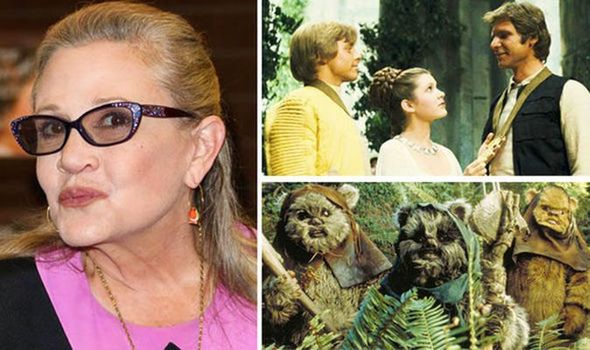 The lady also forever known as Princess Leia was a gifted writer and incorrigible raconteur. She delighted crowds at fan events and readers of her books with naughty and irreverent revelations about famous Star Wars moments, on-set antics and, of course, her long-suspected affair with Harrison Ford. Undoubtedly, the most extraordinary remains her jaw-dropping account of what happened in the Ewok actors’ trailer on set.

EWOK SEX: The Star Wars legend was being interviewed by Stephen Colbert when she made the shocking revelations about all the on-set shenanigans of the diminutive actors during the filming of A New Hope, The Empire Strikes Back and The Return of The Jedi.

Fisher said: “You know who had the most sex out of the whole cast? They screwed like rabbits.

“Their trailer had to be hosed out twice a day. It was disgusting.”

She said: “Of course I wanna see what bad hairstyle they think of for me this time. Everyone knows about the hairy earphones…

“The baboon ass – that is the worst one so far. It does look like a baboon’s ass. Not that that’s a bad thing, just as a hairstyle.”

The 60-year-old star made headlines a few weeks ago when she announced she had an affair with the married Ford on-set, when she was just 19 and he was 33-years-old.

The passage appears in one of the earliest passages of the memoir, soon after she began her affair with the actor and reveals her fears that Ford will end up hurting her.

She writes: “Why have I become casually involved with someone who, if I am being totally honest with myself, I don’t care for and who doesn’t care for me? And is married.”

The diary continues: “I’m scared. Scared that I’ll let Harrison hurt me. The hundred-dollar question: ‘What do we mean to one another? Let’s define our relationship, you b*****d.

“We could come to a full stop now if you think that would help. It’s now a question of surviving each other’s company instead of enjoying it.”

ROBOT SEX: Fisher was asked if she thought the sex between Leia and Han might have lost its spark over the years.

The quick-witted star shot back: “No, no it doesn’t,” but she also gave a glimpse of how people will meet their needs in the future.

Her sci-fi solution to maintaining your sex drive as you age that really tickled the fans when she teased: “We’ve got robots for that.”