After a string of steady results, 2Day FM's breakfast show has crashed in the latest radio ratings, suffering its worst showing in almost two years.

The show – hosted by Ed Kavalee, Grant Denyer and Ash London – secured just 3.1 per cent of the total breakfast audience; a drop of 1.1 per cent on the last survey period, leaving it in the timeslot's doldrums with the likes of 2CH 1170 and ABC Classic. 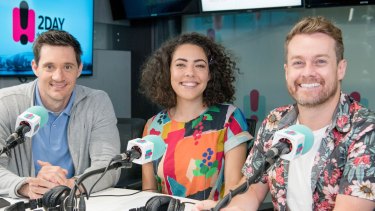 It's the worst result for the show since December 2017, when – then hosted by comedian Em Rusciano – it plummeted to a 2.8 per cent audience share, instigating internal hand-wringing and an overhaul of its presenters' lineup.

Overall, 2GB maintained its stranglehold on Sydney radio with a total audience share of 14 per cent, despite subtle drops across its schedule. The station announced this week that leading evening host Steve Price would be shifting to a new 12-3pm broadcast from July 15.

Smooth FM, likewise, maintained its lead on the FM dial with a 9.9 per cent audience share, almost two full points over its place-getting rivals, WSFM (8.2 per cent) and KIIS 106.5 (8.1 per cent).

23 Things Anyone Without A Dishwasher Needs ASAP

What to Watch Tuesday at Wimbledon
Recent Posts