Blood & Treasure Finale Recap: Catch the Spirit (Plus, the Latest on Season 3)

The Khan was on… a rampage, as Blood & Treasure Season 2 came to a close this Sunday on Paramount+. Was the season finale “very satisfying” as promised? And what’s the latest word on a possible Season 3?

The finale found Danny, Lexi, Chuck and Shaw laboring to convince the Superintendent at the Hong Kong PD that arrested Simon Hardwick is in fact not the Great Khan, and that the true villain is still out there and about to storm the building/seize the banner. Oh, and she has an underground nuke ready to detonate/kill millions! The Superintendent chose to play it safe and not let this quartet of “Westerners” get in harm’s way, so he locked them up in the basement. 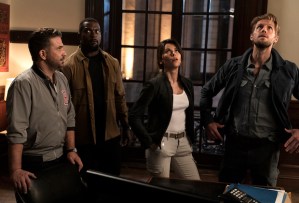 Luckily, Danny uncovered a boarded-up set of stairs, and the four made a run for it just as Violet and her goons infiltrated the PD and started shooting/fwip!ping cops dead willy nilly, after plunging the city into a blackout. But by the time Violet got to the vault holding the banner, it was gone — pinched by a gloating Simon.

Simon eventually turned the banner back over to Violet, as he scampered off to co-opt her getaway plan. Danny and Lexi went after Violet, while Shaw and Chuck headed to (somehow!) deal with the nuke. But when Shaw got detained by a band of baddies, he sent Chuck ahead to do his best with the bomb. Chuck was understandably stymied upon finding the device, but he apparently had juuuust enough of a cell signal to receive a link to a “How To” video sent by Shaw — though it paused/started buffering at the worst possible moment!

Danny and Lexi chased Violet to the rooftop helipad where she had hoped to get flown to freedom, but Simon bribed/made use of her pilot first. A two-on-one melee ensued, with Violet trading blows with both Danny and Lexi, and all with the nuke detonator being bandied about. Violet eventually got the upper hand on Danny and put several bullets into him. As he slumped to the ground, Violet pinned down Lexi and pummeled her former gal pal. But wounded Danny got Violet’s attention by waving around the detonator, distracting her long enough for Lexi to sneak up behind her and gut her from behind with the pointed end of the Spirit Banner. Battered Lexi then raced to Danny’s side, where she suggested that their commingled blood could be seen as a form of marriage, and they exchanged “I do’s.” 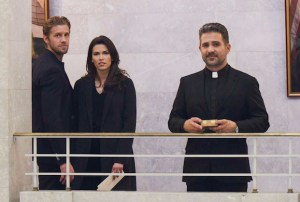 In a “Happily Ever After”-ish epilogue…. We saw Danny successfully petition a judge to pardon all of “Shaw” aka Dwayne Coleman’s illegal past actions, leading to a joyous reunion between Dwayne and his family. Danny, Lexi and Chuck then got flagged down by a lawyer for the Reece family, who came bearing 1) a copy of Kate’s CIA Memorial Wall star, for Chuck, and 2) an eye-popping trust that Jacob had bequeathed to Danny. (Vatican Intelligence member?) Chuck then disclosed that though the banner had been reclaimed, $10 million of the stolen money “inside” it had gone missing.  As we see a mostly shaved Simon pull up to a bank in Costa Rica to deposit a bag full of cash. When asked what he does for a living, Simon says, “I find things,” as we note that he’s holding a map to… something.

Will fans ever learn what Simon is after next, and where that will take “newlyweds” Danny and Lexi?

Ahead of the long-delayed, relocated-from-CBS Season 2, series co-creator Matthew Federman told TVLine, “At Blood & Treasure, we have a kind of ‘never say never’ and ‘never say die’ [attitude]. It’s like, who knows? If the numbers are really good, we could always bring the band back together. We have a ton of stories we can tell in this world.” And even though male lead Matt Barr now stars on the new CW drama Walker Independence, “it’s the same corporate umbrella, so I think it could be worked out.”

More recently, on the day of the Season 2 finale’s release, Federman told fans via Twitter, “I don’t know what the future holds but I’m very proud of what we got to do with this show, shooting our little action/adventure on four continents and through a pandemic. Thanks to our partners at CBS who trusted us to pull it off and our amazing writers, cast, crew and staff. It was very much the adventure of a lifetime. And thanks to everyone who watched and spread the word.”

11 of the best autumn/winter boots to invest in