“Big Little Lies” is starting to feel like a tragedy. An inverse of the original season’s hopeful, unifying message, Season 2 is taking the merry band of murderers and turning them against each other. At first, it felt like the Monterey Five were leaning on one another to help cope with their shared trauma, but as the lies eat away at each of them, the group is falling apart. And now, so is the show. There’s drama to be found in such interpersonal turmoil to be sure, but Episode 4 was too predictable, too reticent, and, ultimately, too far-fetched for its own good.

Let’s start with the obvious problem: When you title an episode “She Knows” after spending all season watching one character search for one secret, it’s reasonable to expect Mary Louise (Meryl Streep) to, if not unequivocally discover who killed her son, at least float a theory. Instead, she plays her ace without proper motivation. As we outlined last week, Mary Louise has a pretty strong case against Celeste (Nicole Kidman), even before Celeste hit her in the face and brought home a bartender to meet the kiddos.

But the drama of her legal plea is lessened by the good intentions behind it. Sure, Celeste isn’t exactly fit to parent right now, and yeah, making the audience realize that (if they haven’t already) at the same time as Jane (Shailene Woodley) is potent. Do you, dear reader, want Celeste driving Ziggy around the winding oceanside cliffs of Southern California? “Great point, Mary Louise. I think not!”

But how much better would it be if Mary Louise was motivated by vengeance in addition to goodwill? If she knew Bonnie killed her son, or, better yet, was convinced Celeste killed Perry (Alexander Skarsgård)? Further complexity would build added intrigue around her character, keeping the audience guessing as to how far she’s willing to go instead of watching her dutifully and responsibly react to the events in front of her. Meryl Strep, already outstanding with only this much to do, would be given more teeth-chomping wrath to toy with, which would be much more fun than seeing a grandmother protect her grandchildren for all the right reasons. Give her an edge, already. Let’s see that person who screams again. 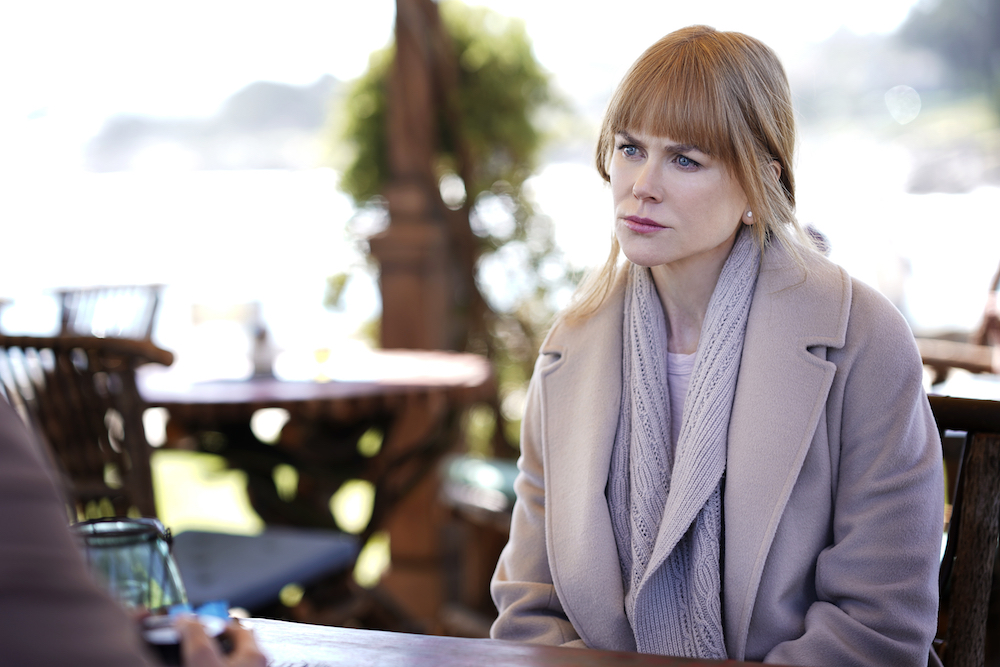 So long as Mary Louise doesn’t know who killed Perry, or that Perry was even killed, “Big Little Lies” is just stalling. And if she does actually know, she’s hiding it too well, and for too long. Renata’s party for Amabella was the perfect time to clue her in — Celeste and Bonnie (Zoe Kravitz) were feuding with Madeline (Reese Witherspoon); Ed (Adam Scott) and Nathan (James Tupper) came to wimpy, boyish blows; there were lots of guests, and Mary Louise had already set the precedent for showing up to places uninvited. What better setting for the truth to come out?

Clearly, screenwriter David E. Kelley and Liane Moriarty, who helped form the Season 2 story, have other plans in mind, and this is where the red flags really start to pop. At the end of “She Knows,” the eponymous she is none other than Elizabeth (Crystal Fox) — yes,  Bonnie’s mom. OK, that’s a less dramatic choice to be sure, but fine. Maybe she can help get her daughter out of her rut. Except, well, what exactly does she know? It’s a bit unclear, though the visions Elizabeth sees before and after her stroke show alternating bright lights and bubbles of water. Then, Bonnie is shown diving into the ocean. Finally, in the last clear image of the episode, she’s floating facedown and lifeless in the deep blue sea.

Whether that shot is a blunt visual metaphor (“Bonnie is drowning under this lie!” “This lie is killing her!”) or concrete foreshadowing will determine just how bad this choice ultimately is, but either way, it’s not great. At best, the climax of the episode was watching a somewhat inconsequential character continue to be worried about her daughter. At worst, “Big Little Lies” has fallen prey to the Magical Negro problem, where Elizabeth is an old black woman with mystical powers that allows her to help others. Thankfully, she’s there to help Bonnie first, but whatever she’s seen could still end up helping her daughter’s very white friends, as well.

This is where we are with just three episodes left in Season 2: The Monterey Five are still holding onto their lie. The intrusive outsider still doesn’t know what she came there to find out. And there’s a mystical black woman who may be the key to breaking the whole thing open. More to the point, audiences still don’t have a good answer for why we’re spending this much time watching a group of friends self-destruct. Yes, Perry was killed. Yes, they lied about it. Yes, their pattern of lies is a problem worth dealing with, but “the lie” is based in guilt for protecting each other from a rapist and a serial abuser. Perry’s death brought them together in Season 1, and now it’s driving them apart?

There’s a missing link here that Season 2 has yet to find. Hoping these women can reunite before season’s end can’t be the only thing to root for, not after they already earned each other’s support, and ours. Things aren’t exactly looking great for the group, but for the first time this season, they’re not looking great for “Big Little Lies,” either.

Taylor Swift Responds to Sale of Her Old Label With Fury: ‘My Worst Case Scenario’