With this year’s Commonwealth Games kicking off in Birmingham today, Charlie Stayt was fronting BBC Breakfast live from the city where he was joined by Culture Secretary, Nadine Dorries. Stayt has plenty on the agenda to grill Dorries on, from the ongoing obesity crisis to the Tory leadership race. However, both Stayt’s line of questioning and Dorries’ attempts to seemingly dodge the probes left BBC viewers rather irked.

One instance of a clash between the BBC host and Culture Secretary came as Stayt grilled Dorries on her support for Liz Truss in the ongoing Tory leadership race.

He brought up tweets Dorries made against Rishi Sunak, despite the Conservative Party members being reportedly keen for positive and amicable campaigning rather than hostile.

“We have a leadership race going on at the moment and a lot of people’s observations at the moment is that it is far from positive,” Stayt put to Dorries.

“There’s been a lot of words knocking around that we could do without,” he continued. “You have been directly involved ins one of that. 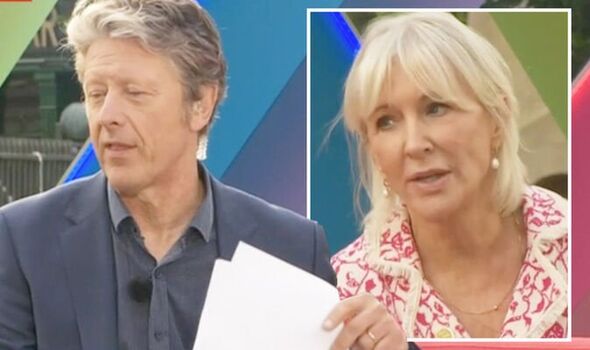 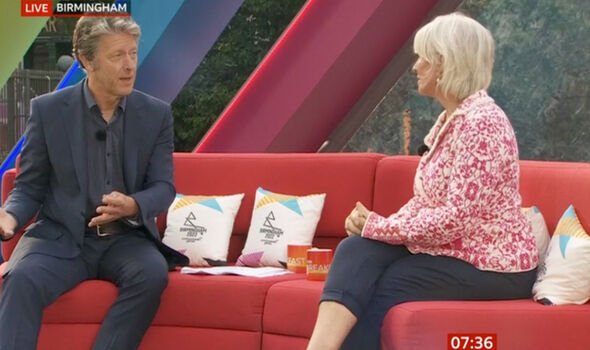 “You’ve made comments that people will be aware of by now about earrings and Rishi Sunak’s clothes, have you got any regrets?

“Do you think you should have zipped it for a bit and not talked like that?” Stayt added, prompting Dorries to hit back: “So removing a sitting prime minister who won us an 80-seat majority three years ago,

“Who took us through Covid and led the world in the response to Ukraine, defenestrating that prime minister was never going to be an easy thing to do.

“It was always going to have repercussions and I think I said at the very beginning we’re kind of unleashing the hounds by doing that. 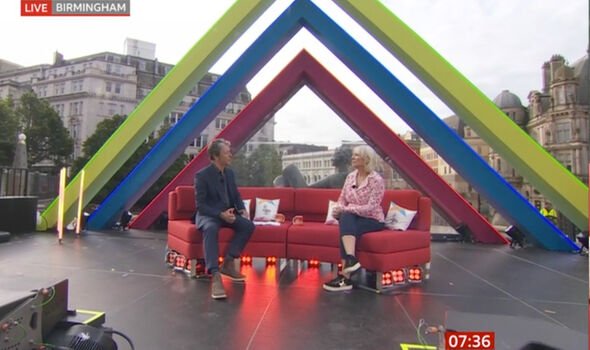 “What you’re seeing at the moment is a leadership election, not just for the leadership of the Conservative party, but whoever wins will be prime minister on day one.”

“But my question was about your comments,” Charlie interjected to cut Dorries off.

She simply replied: “You know, I made my comments and I stand by my comments.”

But Stayt wasn’t done as he went on to read aloud the tweets Dorries sent regarding Sunak in which she took aim at his attire for wearing “Prada shoes” and suggested Truss was a more relatable candidate.

“Why bother saying that if you believe in positive campaigning?” Stayt grilled before Dorries defended her comments by pointing out “judgement is important” as the country faces a “cost of living crisis”.

However, before Stayt could question her anymore, Dorries segued back to the Commonwealth Games, suggesting the country’s focus should be on Birmingham and the sporting events rather than the leadership race.

And Stayt followed suit, failing to pick Dorries up on her answers and instead showing off the finish line for the marathon race due to take place.

As a result of the pair’s chat, a number took to social media to share their thoughts – and a number weren’t best pleased with how it unfolded.

And Arnaud Humblot agreed: “Nadine on BBC Breakfast, another car crash interview. She is unable to accept any mistakes. Reply to tweet re prada/earring is some nonsense about leveling up and having good judgement. Her answer to the obesity Q was also incredibly bad.”

However, many took aim at Stayt, with @sneaky_001 arguing: “Could @BBCBreakfast Charlie Stayt be more left wing bias if he tried….focus on Rishi suits higher than discussion content. Such a poor quality interviewer.”

@HelsMaddz concurred: “Charlie Stayt defending Rishi whilst he’s supposed to be talking about #TheCommonwealthGames. Seems the #BBC has a new leader they want. @BBCBreakfast.”

While Martin Dunne suggested: “The more I see of @NadineDorries standing up for Liz Truss (and facing Charlie Stayt down on @BBCBreakfast today ) the more I believe she is one of our best MPs. She is fluent and clear thinking and says what she thinks.” (sic)

BBC Breakfast airs daily at 6am on BBC One.