Toronto Film Festival 2019: This is the streamer’s first acquisition of the festival 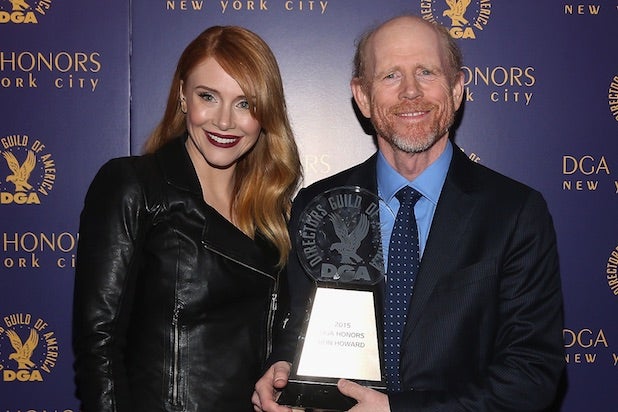 Apple TV Plus has acquired worldwide distribution rights to the Bryce Dallas Howard documentary “Dads,” ahead of its premiere at the Toronto International Film Festival, an individual with knowledge of the project told TheWrap.

This is the streamer’s first acquisition of the festival. “Dads” is an exploration of contemporary fatherhood drawing on the testimonies of famous funnymen such as Judd Apatow, Will Smith, Jimmy Fallon, Neil Patrick Harris, Kenan Thompson, Jimmy Kimmel and Ken Jeong.

Their reflections are combined with portraits of non-celebrity dads from different parts of the world — Brazil, Japan and the United States — who are creating new models of patriarchy. “Dads” will premiere in the official documentary selection at TIFF on Monday.

One voice that Howard includes in her film is that of her own father, Ron Howard, who started his acting career as Opie, son of classic television father Andy Griffith. Interviewed by his daughter, Ron Howard speaks of his goal to meet the standard set by his real-life father, Rance.

“Dads” is part of Apple’s exclusive, first-look deal with Ron Howard and Brian Grazer’s Imagine Documentaries. The film was produced by Nine Muses Entertainment, in association with Dove+Men Care.

Next up for the younger Howard as director is helming episode of the upcoming Disney+ series “The Mandalorian,” starring Pedro Pascal as a bounty hunter in the “Star Wars” universe.

Bryce Dallas Howard is repped by William Morris Endeavor and Management 360. Variety first reported the news about the acquisition.

A New Character Is Joining The End of the F***ing World Season 2, and We're Worried About James
Recent Posts