The One Show: Alex Scott opens up about book

Former Arsenal right-back and football pundit Alex Scott will be releasing her brand new memoir, How (Not) to Be Strong, this week, which presents an honest recollection of her difficult journey from the East End to becoming a household name in broadcasting. In her emotional interview on The One Show, Alex opened up about some of the darkest points over the course of her career.

Alex became tearful during her chat with Alex Jones as she recalled her struggles with alcohol and online trolls in the toughest parts of her career.

The One Show presenter began by congratulating her on laying bare some of her most personal memories in her new memoir.

“Already, you explaining that I get emotional about it,” Alex admitted. “Because I’ve never wanted someone to feel sorry for me.”

The former Arsenal star and broadcaster’s book details her struggles with alcoholism in recent years as well as her tumultuous childhood. 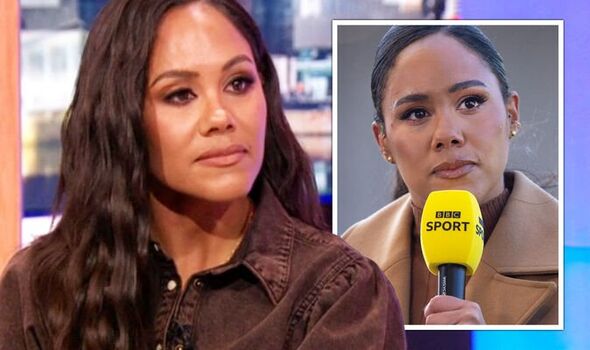 Alex revealed she has only recently learned how to be vulnerable and open about her challenging experiences from her past.

She explained: “It was always, ‘Put on a front. I’m fine, I’m independent, I can get through anything.’

“But, I think, from the last couple of years, I’ve been on my own personal journey.

“I wrote the book because I wanted my mum to be free of it, now. I want my mum to feel she has the whole rest of her life to live.”

“And for me to be free of all the emotions, and all the heaviness of it all. So, I’m excited for, now this next chapter.”

Last year, Alex confirmed she was just seven years old when her father left, taking almost all of their possessions with her.

Although she has since found success as a footballer and presenter, abuse from online trolls led to severe struggles with her mental health and alcohol.

Alex asked: “Can we, if it’s not too tough, go back to 2018? Because you say that there was a moment that year where you felt that things came to a head.”

“And in a way, though, that’s where things started to get better as well.”

“Yeah, the light,” Alex agreed. “I was in a really dark place.

“I remember walking past the mirror and looking at myself, and I couldn’t understand why I was uncontrollably sobbing.

“From the outside, everything’s fine. I’ve got a job I was super happy in at that part of my life. I should have been celebrating and happy.

“But I was just so sad and consumed by a lot of stuff. Besides a lot of alcohol as well. I was just like, ‘I can’t continue like this. I have to ask for help.’ And I did.”

She went on to admit: “I was always scared to ask for help. I was hiding everything.

“Sometimes the headlines are the trolls pushed me into therapy, but there’s been a lot of things that have gone on in my life that I’d never dealt with or spoken about.

“The trolling and abuse that I got from what I was doing work-wise was just the part that pushed me, finally, into therapy.”

More about Alex’s journey can be found in her new memoir, which hits shelves this Thursday.